'I Have Lost Respect For Rahul Dravid'

So declared my wife, a great fan of 'The Wall', even as she surfed the internet in vain to get a version from Dravid or his bride, Vijeta Pendharkar, about their marriage... 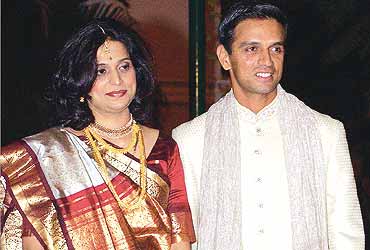 "I have lost respect for Rahul Dravid," declared my wife, a great fan of ‘The Wall’, even as she surfed the internet in vain to get a version from Dravid or his bride, Vijeta Pendharkar, about their marriage. "What’s all this privacy thing? What’s all this policy of not speaking to the media about the marriage, when Dravid is in your face all the time endorsing products nineteen to the dozen? Dravid should have had some respect at least for the consumer who uses Orange cell network, drinks Pepsi and uses numerous other products that he endorses if not for fans of the national team he represents."

Indian readers might find this an overreaction, but my wife, having not lived in India at all, is not very familiar with the peculiar way in which Indian cricketers handle events such as marriage. She was not asking for too much: just an exclusive photo shoot in a publication just as is the practice among celebrities in the West, or a narrative from Dravid (if not from Vijeta) about how they met, why they decided to get married and how they feel now that they are married. Surely, if David and Victoria Beckham could give exclusive photo-shoots to one of the English tabloids and speak about their feelings for each other through the media, so can people like Tendulkar and Dravid.

The fractured relationship between the public and the private is a Western thing, not a South Asian one, and can be traced to the origins of liberalism and capitalism. Why then should our cricketers literally hide their private emotions and moments when Beckham can declare that he fell for Victoria’s ‘peppiness and dimples’ and Michael Owen can talk in the media about his girlfriend Louise’s ‘enchanting smile and elegant dress sense’ and both the stars can discuss their wife’s interests and passions? Even in third world Latin America, Diego Maradona was anything but private in talking about his marriage, and Ronaldo has had to speak about his partner in the media.

The answer lies in plotting the location of the upper middle class (upper caste Hindu and elite Muslim) in India with respect to modernity and their positioning with respect to marriage. While it is common to see upper middle class Indians taking a liking for continental food, pizzas and burgers, keeping abreast of the latest cars and designer wear in the West, keeping a tab on the British and American Top of the Pops charts, it is also common to see them retreat to the patriarchal, traditional and middle class practices when it comes to marriage.

Forget the cultural practice of arranged marriages, which is still a powerful institution among the Indian upper middle class, even the peculiarly South Asian concept of ‘love marriages’ (if one introduces this term to a western audience, one is likely to be met with a medley of responses that range from bewilderment through curiosity to amusement.) need a religious framework to be operational and even they work on the foundation that very little information about the wife need be made available to the outside world.

Dravid, and even Tendulkar and Ganguly before him, fell back to their middle class ethos at the time of their marriages whereas Beckham and Owen did not have to deal with any contradiction between the cultural practices of their working class origins and their new- found status as superstars representing their nation and city clubs in managing their relationships with their partners.

An interesting, though slightly inappropriate, comparison in this context would be the marriage of former Pakistan cricket captain and national icon Imran Khan with Jamima Goldsmith. The marriage attracted a lot of attention in the English as well as in the South Asian media, and one may recall that Imran presented his to-be wife as a political and sexual being before the world in trying to argue that the marriage should not be viewed entirely in the clash of civilizations paradigm. Both Imran and Jamima talked at length of Jamima’s understanding of the colonial history of Pakistan and her appreciation of Pakistani art, architecture and fashion as much as that of western art, architecture and fashion.

With respect to the marriages of Ganguly and Tendulkar, a certain sense of distance and passage of time has led to master narratives of their marriages and their wives. For instance, through the media and through cultural productions such as biographies and television shows, we now know the circumstances behind these marriages and about the interests and vocations of wives, Anjali and Dona. Both Tendulkar and Ganguly have begun to speak about their partners to the outside world though they still are reluctant to address the sexual and political identities of their partners by talking about their worldviews, sartorial preferences and charms. One can’t be too sure that in the years to come one would get to know these things about Vijeta from Dravid.

The reluctance of our sporting stars to talk about their marriages and partners at the time of the event can also be attributed to the fact that it is only through their marriage that they announce their entry into the public world as a sexual being. And, obviously, our stars need some time to get comfortable with their newfound identities. Our stars, unlike European or Latin American soccer stars, do not date before marriage or even if they do, they tend to dismiss any possible reference to them in print by charging the media with spreading rumours or suggesting that the person in question is ‘just a friend’.

Whatever be the reasons that induce our star cricketers to retreat into silence at the time of their marriages, they should well be aware that they are public figures not merely in the representational way – being the leading figures representing their nation in the number one game in their country—but also in a consumeristic way—being the leading figures prompting vast numbers of people to buy products they endorse.

It would be only do them a world of good if they realize that there is no harm in the tradition of European and Latin American soccer stars showing respect for the citizen, club supporter or consumer. An exclusive photoshoot with partner or a media statement about the marriage is not going to harm you, dear demi-gods!

(The author is a researcher at the Warwick Centre for the Study of Sport, UK)

Islands In The Sun