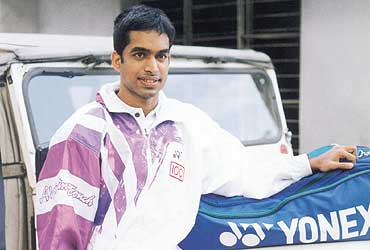 Former All-England champion Pullela Gopichand believes he can compete at the top level for a couple of more years even though persistent injuries have kept him sidelined from badminton for some time now and forced a drastic drop in his world rankings.

The 30-year-old shuttler, who, in 2001, became only the second Indian to triumph at the All-England Championships, also expressed his desire to become a coach once his playing days were over.

"I think I still have a couple of more years of competitive badminton and I am satisfied at the way things are going now as my motivation is the same as when I was 10 or 12 years old," Gopichand said in Mumbai at a coaching clinic for youngsters.

"I don't want to give up easily and as long as I maintain my physical fitness, I think I can contribute a lot to the country as a player and as a coach, which I will be taking up after my playing days are over," he said.

Gopichand, who has undergone four operations on his knees, said he was recovering well from the crippling injuries and hoping to do well at the Singapore Open next month which is the first tournament he will participate after a long time.

"In fact, I wanted to play in the All-India tournament held here recently but I was training for the Asian circuit (which was later postponed), and did not want to disturb my schedule," he said.

Gopichand's career has been plagued with injuries but the soft-spoken star from Hyderabad said it had not been able to dent his confidence or the determination to excel.

"Due to the injuries I have slipped to 125 in the world ranking from the top ten. I want to get back to the top 30-35 but it is going to be hard. I will have to play in qualifying rounds even in lesser events," he said.

"Though I cannot train like I used to, I have started seeking help from an athletics coach. This also helps me retain independence in training while gamewise I need to get the strength back in my knees and shoulders for matches".

Gopichand said he was satisfied with his achievements even though he could have done better had it not been for constant injuries.

"At the end of my career, I would be a bit sad about the injury problem I have faced but it is a tough sport and that has taken its toll on my body. Very few people play as long as I have in competitive badminton," he said.

He said there was a shortage of players of international standard in the country and that was a cause of worry for Indian badminton.

"Apart from Chetan Anand, who is the best talent in the country now, we do not have many international standard players even though we have a few good players at the national level," Gopichand said.

A Dash of Red