Spurred by the success in Australia, the veteran striker says he is looking to extend his international career by two to three years 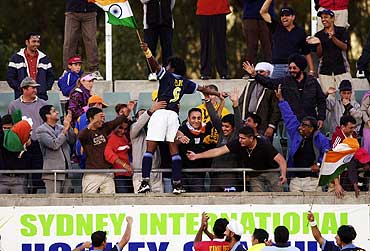 Dhanraj Pillay celebrates after India beat Australia in the final of the three-nation tournament
AP
June 10, 2003 00:00 IST 'I Feel I Can Play On'

Spurred by the success in Australia, veteran Dhanraj Pillay, the best known face in the Indian hockey team in recent years, indicated that he was looking to extend his international career by at least two to three years.

"Now, I feel I can easily play for the next two to three years," said Pillay, who had in recent months hinted that he was close to taking a decision on retirement.

Captaining the side, Pillay guided the team to victory in the second leg of the three-nation hockey tournament at Sydney beating Australia in the final.

Pillay said the tournament had done wonders for him and he was feeling totally fit.

He did not feel exhausted and gave credit to trainer Sampath Kumar who, he said, did a fine job.

"I was very fit. I did not feel that I was very senior to the juniors. In fact, I was ahead of them by one or two steps and it gave me happiness that I was able to play alongside them (the juniors)," he said.

"The tournament in Australia was a good start and we will try to keep the tempo for the Champions Trophy in August," Pillay said.

India has never won the prestigious Champions Trophy and last year it had to be content with the fourth place. Its best ever show has been a third place finish.

Pillay said the current team was an experimental one, having been knit together keeping in view the Champions Trophy.

The mercurial striker said the team was now looking to build on its good performances in Australia and work harder to win the Champions Trophy and the Athens Olympic title.

He said the team would assemble in Delhi on June 17 for a short-camp before proceeding on June 21 to take part in the Panasonic Cup in Germany, which begins on June 27. The other two nations featuring in the tournament are Argentina and Spain.

Team work was the key to success in Australia, Pillay said, adding, he would not like to single out any individual player.

But he, however, said Sandeep Michael's goal against Pakistan was "one of the best goals" he had ever seen. It was hit from "zero angle" and he had seen only Mukesh Kumar come out with such shots.

Pillay expressed displeasure over the red card shown to Baljit Singh Dhillon in India's match against Pakistan, saying it was the reason for India's failure to beat its arch-rival.

Explaining the brief confrontation on the field, he said the matter was resolved after the two captains had a talk and they decided to treat it as a non-issue on mutual understanding.

"I don't know why Dhillon got the red card. I don't think he should have been given that," he said. "After Dhillon was shown the red card, we could not keep our 3-1 lead and had to settle for a 4-4 draw.

Responding to a question on the clash with Pakistan, Pillay said "We play with an attitude that we can lose to any team but not to Pakistan. When we play Pakistan, we have to give 200 per cent."