The Indian captain defends his decision to bowl first but admits that it was 'generally a poor bowling performance' and that even chasing 300 runs was possible but 360 was a bit too much. 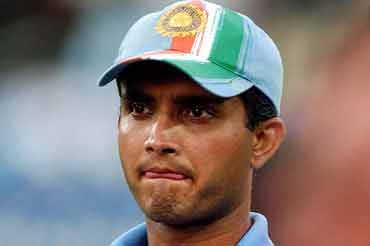 Do you regret the decision to bowl first?

Not at all. I believed the conditions would favour the bowlers but they simply could not put the ball in the right place. They bowled short. It was generally a poor bowling performance. Obviously on this pitch even chasing 300 was possible but 360 was a bit too much.

A bit of both. They did bat brilliantly but our bowlers too showed a touch of nerves. The first over was a very poor one. After that things just went on like that without any control.

Till a point, the final was actually a close match wasn't it?

Yes I did believe we had a chance but once the wickets began to fall and the required run rate started climbing it was all over.

Did you really believe you could win the World Cup?

Yes I did and I am extremely disappointed with the way we played in the final. There was something in the pitch for the bowlers early that should have been exploited. That's were we lost the cup. But on the brighter side a very young team has got an invaluable experience through this World Cup.

Do you think the occasion pysched some of Indian players?

I would say for some of the boys it was their first world cup. They were inexperienced and perhaps were a bit overwhelmed by the occasion but again many of them were in the side that beat the Australians back home. So I would imagine they are people who can perform at this level of the competition.

Do you think this Australian side is beatable on a normal day?

Well someone has to stop them. It's upto every country to think of ways to beat the Australians.

Do you agree with the contention that something transformed this Indian team in the course of the tournament, after the first round defeat to Australia in Centurion?

I don't think 'transformed' will be the right word to use. I have always maintained that there was only one poor match we had played (before the final) and that was against Australia. Otherwise this team has performed very well given the conditions and quality of opposition. We obviously have had off days. But not only in this World Cup but for over a year this side has got some great wins. This is one of the best one day sides India has ever seen.

It's also said to be the most united.

Yes it is. This is truly a team where cricket is above everything else. More importantly the younger players in this side know that the seniors will always back them, will always be there for them and that nobody will ever put them down. We have been able to create a certain atmosphere in the dressing room that's relaxed and friendly. I have not let even the younger players feel as though I am the captain. I don't believe in this thing about a captain having some kind of a special aura in the dressing room. In fact in one of the team building exercises during training sessions most players took turns as temporary captains. There were batting, bowling and fielding captains. Sachin, Rahul and I took turns as batting captains, Srinath and Kumble took turns as bowling captains and Yuvraj and Kaif took turns as fielding captains. The idea is to see what points of view other players have when they are in a position to make decisions on the field. Also, it has not just been cricket all the time in South Africa. We have had a lot of fun together like during team dinners when we all went out together to a restaurant. Though I do think the vegetarians suffered a bit here.

What according to you is the most unique aspect of this Indian team?

Exceptional talent. And every single member in this team is a match winner on his day.

The Indian huddle on the field had become symbolic of the team's sensational progress in this World Cup. What exactly was spoken in the huddle?

When we group together after a wicket has fallen we congratulated each other and discussed how to handle the next guy who is coming in. But it was basically a celebration more than strategy discussion. It was Sandy Gordon's idea. Through out the World Cup we have huddled together not just when a wicket fell but also after every win. We were telling ourselves, we were one step closer to winning the World Cup.

You have been unforgiving to the kind of reactions that were witnessed back home after that first round defeat to Australia. Did they serve as a kick in the rear of sorts?

Not at all. Stoning of our homes and burning of our posters are not what I call motivational factors. We didn't need such motivation. Playing in the World Cup itself was a good enough motivation.

You had earlier stated that this Indian fast bowling attack is the best India has ever seen. Srinath Zaheer and Nehra must have been an asset to you.

Without doubt. I am amazed at the level of fitness they could achive. Zaheer and Nehra have given their hearts out but Srinath is very special to me. He is also one of the main entertainers in the team along with Harbhajan and Yuvraj. It will be very difficult to find a replacement for Srinath after the World Cup. He is a wonderful human being too though I should add he is a bit mad.

There have been some gestures from the government like tax waivers in the course of this World Cup. Did such moves embarrass you or did you take them as appropriate acknowledgement?

We have been too focused on the cricket to have an opinion about it. It was nice to speak to the Prime Minister after the victory against Pakistan. I had received a letter of appreciation from him and good wishes and I called him up. It was a brief formal call where he congratulated the team and wished us good luck.

As a senior cricketer do you feel there was any strategic or other innovations in this world cup?

None I would say except that with conditions favouring quick bowlers in the beginning all captains hoped to get early wickets through out this tournament. Apart from this factor teams stuck to their plans.

There was so much doubt before the tournament began and even after it started about your own form. With 3 centuries in a single World Cup and a total of four in 2 World Cup tournaments, you must be satisfied on the personal front.

Yes. More importantly some of my best contributions in this World Cup came at crucial times when the team most needed it. My confidence against spinners has grown over the years. I enjoyed the sixes I hit in this tournament. I really like to see the ball land across many rows of seats. I don't consciously hit it hard. It's just the bat lift and the timing that makes the ball travel.

You had said in a press conference that you would rather play Sri Lanka in the final instead of Australia. But do you agree that the real challenge and satisfaction is in beating the Australians in a World Cup final?

I agree that the challenge is in beating the Australians but the reason I said that was that any captain would take the best route possible to winning the world cup.