At least, P. Chidambaram had the grace -- perhaps also the political wisdom -- to apologise and admit to lapses. But there are some men and women in Mumbai who need to answer some tough questions... 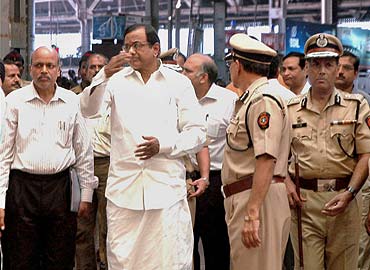 "I am sorry Mumbai," said a subdued P. Chidambaram, India’s new home minister three days back, after inspecting terror attack sites and meeting some of the survivors of the Nov 26 attack. Chidambaram further said: "I agree there has been a failure on the part of security forces…undoubtedly there have been some lapses. I will be less than truthful if I say there were no lapses…I will strain every nerve to overcome the causes of these lapses". At least, Chidambaram had the grace -- perhaps also the political wisdom -- to apologise and admit to lapses.

If he is serious about "overcoming the causes", he will have to identify the people, mainly bureaucrats, who did not or could not tally intelligence inputs, adopt strategies to take action on the basis of such inputs, and demand that counter measures be put in place. Once identified, he will have to overcome possible political pressure to show these gentlemen that not getting it right means the end of the road. Chidambaram, many in Mumbai hope, will be able to carry his assurances through. But there are some men and women in Mumbai who too must be asked tough questions.

To begin with, there’s the Director General of Police AN Roy, who sat stone-faced, next to Chidambaram, as he offered the apology. Roy, as the head of the force in Maharashtra has chosen not to speak to people, either to apologise or to reassure. Apologies cannot undo 26/11, but it can offer hope that the gross blunders may not be repeated. An angry citizenry demands answers to questions such as: Why didn’t the Maharashtra police and Mumbai police act, with due diligence, on the intelligence inputs that came from the Centre in September and November? Why didn’t the DGP coordinate sufficiently with the Coast Guard and the Indian Navy to thwart terror attempts? Why didn’t the DGP function as a DGP ought to? And many more. Mumbaikars are waiting to hear from you, Mr Roy.

Not far behind is the Mumbai police commissioner Hassan Gafoor. A genial, self-effacing officer, known for his integrity and commitment, Gafoor could have chosen to be the face of the administration in those terrible 60 hours of the attack. He did not. Both Roy and Gafoor had lost some of their best men in uniform at the very start of the terror attack, including the chief of Anti Terrorist Squad Hemant Karkare, but the commissioner could have filled in the vacuum left by directionless politicians at the helm of affairs. Gafoor could have, and should have, addressed Mumbaikars in the first few hours, reassured them, kept them abreast of the counter-terrorism operations, and scotched rumours. As the late AS Samra, then police commissioner, had done so valiantly in March 1993 after the serial bomb blasts, with due permission from the then chief minister Sharad Pawar. Why didn’t you talk to us, Mr Gafoor?

Before that, why didn’t you make a fuss about the poor counter-terror mechanism -- both men and material -- for the city, knowing well that a single lapse would have meant a heinous attack and many hundreds or thousands of lives lost? Gafoor was aware of the heightened threat perception to the city, abreast of the specific intelligence inputs, and had called special meetings in September and through October to put some measures in place. Why didn’t you, Mr Gafoor, keep them going after mid-November? Why didn’t you coordinate better with the Uttar Pradesh police on the Faheem Ansari case? Ansari, a Mumbai resident and alleged LeT operative, had reportedly done reccees of the Taj Mahal hotel, the Oberoi-Trident, the Chhatrapati Shivaji Railway Terminus amongst other high-profile locations about a year ago and his hand-drawn maps form part of the chargesheet filed by the UP police. Why didn’t you coordinate better between your Crime Branch, which has consistently kept track of such operatives and the ATS which has a more specific responsibility but not the sweep of its counterpart? Why didn’t you insist that the CST and hotel managements kept up their vigil? Mumbaikars are waiting to hear from you, Mr Gafoor.

The blame must be shared, to an extent, by the managements of these places too. Gafoor, in late September, had instructed officers to issue terror warnings to managements of five-star hotels in Mumbai, asking them to adopt specific measures to enhance the security apparatus at each hotel. This is the warning that Tata head honcho Ratan Tata referred to in his interviews. But Mr Tata has to answer a few questions too. Police teams deputed to the Taj had, in fact, met with the hotel’s senior management including general manager Karambir Kang to discuss security measures, in late September and early October. This was followed up with a 24-point to-do list that the Taj had to take care of. Among these: restriction on accepting Pakistani nationals as guests, regulating entry from the rear gates (which the terrorists were to use without fear of being stopped), and regular sniffer dog searches. Some measures were put in place, but relaxed when guests complained of inconvenience. But police sources say that the management would not ramp up security at all entrances or allows dog searches. "When we suggested dog searches, we were told that the carpets would get soiled," says a police official. The police team had also requested for a copy of the hotel layout in that meeting, which was reportedly denied. Mumbaikars are waiting to hear from you on these issues, Mr Tata.

The story for the Oberoi-Trident is not very different. The CST is no man’s territory. Between the GRP, Railway Police Force and Mumbai police, they are in charge of different aspects of policing in this humungous terminus that sees close to four million passengers every day. In many ways, the imposing CST building, immortalized in many Hindi films as the passage to the city of dreams, is they symbol of the city in ways that the Taj and the Oberoi cannot be. The CST is Mumbai itself; the five-star hotels reflect the aspiration that the city stands for. After the coordinated bomb blasts in seven suburban trains one evening on the Western Railway, the Central Railway headquarters at CST should have been more careful. But what were the constables doing with non-functional 303s and lathis? How did the two terrorists clear the metal detectors at the entrance? Why didn’t the GRP alert Mumbai police when they began gunfire on Platform 13? Why didn’t the Mumbai Police react faster and seal entrance/exit points to trap the killer duo inside the terminus? Why did it take hours, and the volunteerism of bystanders, to take the injured to nearby hospitals, on handcarts that served as make-shift ambulances? Mumbaikars are waiting to hear from you, divisional manager, Central Railway, Mr JN Lal?

Last but not the least, there were cross-connections in the government itself. The Congress and its ally Nationalist Congress Party (NCP) did not see eye-to-eye on several issues. They partnered each other in the state government but worked against each other at the party level, constantly indulging in one-upmanship. NCP’s RR Patil, as deputy chief minister and home minister, functioned independent of former chief minister Vilasrao Deshmukh. Traditionally, the home portfolio by virtue of its sensitive nature, vests with the CM; that’s where the buck stops. But in October 2004, the NCP insisted on having it and the Congress gave in. So, the top man in Maharashtra government was often in the dark about security concerns as well as law-order issues till they blew up in his face. Patil was known to consult his party chief Sharad Pawar more often than he spoke to Deshmukh.

Add to this disorder, the clash of egos among bureaucrats and even police officers. That DGP AN Roy did not see eye-to-eye with key officers in the Mumbai police, especially those acknowledged having their own informer networks which could have helped counter-terror measures, is an open secret. The DGP talked less often to home secretary Chitkala Zutshi -- who was in the Taj when it was attacked and escaped through a window -- and more to chief secretary Johny Joseph who was devoted to Deshmukh. Insiders have said that Zutshi -- from whom the chain of command to the cops should begin -- was often the last in the loop. Is it any surprise then that the Quick Response Team, set up after the flurry of minor blasts in 2002-03, is not yet functional? Or that the government dismissed as "unseaworthy" four patrol boats after spending Rs four crore from the Centre’s fund? Or that the government could not find the motivation and resources to put in place the slew of marine police stations that were promised after the Gateway blasts of 2003? Deshmukh and Patil had to resign, but they haven’t provided any answers to their lapses. But the questions should be put to their party chiefs too. Mumbaikars are waiting to hear from you, on all these issues, Mr Sharad Pawar and Mrs Sonia Gandhi.

Ashok Chavan and Chhagan Bhujbal, who replaced Deshmukh and Patil as CM and deputy CM respectively have promised "stern action" against bureaucrats and officers for dereliction of duty which led to lapses. Within hours of his swearing-in on Monday evening, Chavan set up a "steering committee" to examine the security lapses and evaluate current situation. Will he fix responsibility and do in Mumbai what Chidambaram must do in Delhi? Mumbaikars are waiting to hear from you, Mr Chief Minister.