'I Am Looking Forward To It'

Scoffing reports of his retirement plans, the veteran leggie is raring to have a go at the Kiwis during the home series 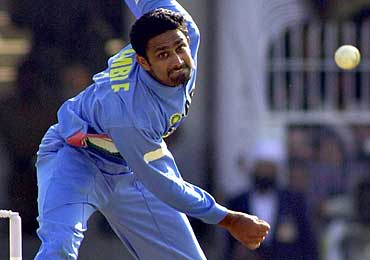 His fellow Karnataka cricketer Javagal Srinath may be ambivalent about his retirement plans but there is no such confusion for Anil Kumble -- the leg-spinner is keen to extend his international career.

Asked if he would be available for the upcoming home series against New Zealand, Kumble shot back: "Yes. What makes you think that I won't be there." The gutsy cricketer said he was looking forward to the series as he had not been in the middle for quite some time now.

"It is a long time before we start international cricket ... that is in September-October. I am looking forward to it (New Zeland series)," he told reporters in Bangalore.

Kumble said the break that he has had after the World Cup in South Africa in February-March had done wonders for him .

"We (Indian team) have a long break now. I have just come back from a holiday abroad. It is good to be spending some time with the family," said Kumble, who was largely overlooked in preference for a seventh batsman in the World Cup.

Unlike many of his teammates, Kumble does not have any plans to play in the English county cricket. "No plans... Nothing," he said.

Kumble refrained from giving his views when asked about the spinners' panel, comprising some of the country's legendary spinners.

"I was not in town... I was away. I was supposed to be part of the team but I was not in India then. I don't know what went up."

The past one year has not been easy for Kumble, the country's highest wicket-taking spinner with 349 Test wickets and 308 scalps in one-day internationals.

The Indian team management's formula of fielding a seven-batsman line-up in one-day internationals has forced the ace leg-spinner to fight for the specialist spinner's spot with Harbhajan Singh. Mostly, he has ended on the losing side.

In the Test arena too Kumble was left in the lurch with India playing three seamers on its overseas tours.

The incidents of the Caribbean tour when he had to suffer the humiliation of being excluded from the final eleven just before the toss in the Trinidad Test, and 'The Assassin' going on to bowl with a bandaged face to prove a point in the Guyana Test are still vivid in his fans' memory.

Being excluded from the team for the most part of the World Cup in South Africa has proved to be the right chaff for the rumour mill which has for long been speculating about his retirement.

'Few Scores To Settle With Kiwis'