How A Culture Buff Is Helping Carnatic Discover One Lost Charm

In a serene pocket on the banks of a Kerala river, music enthusiast R. Padmakumar has been organising chamber concerts for serious Carnatic listeners. A look at the venture now into its tenth year: 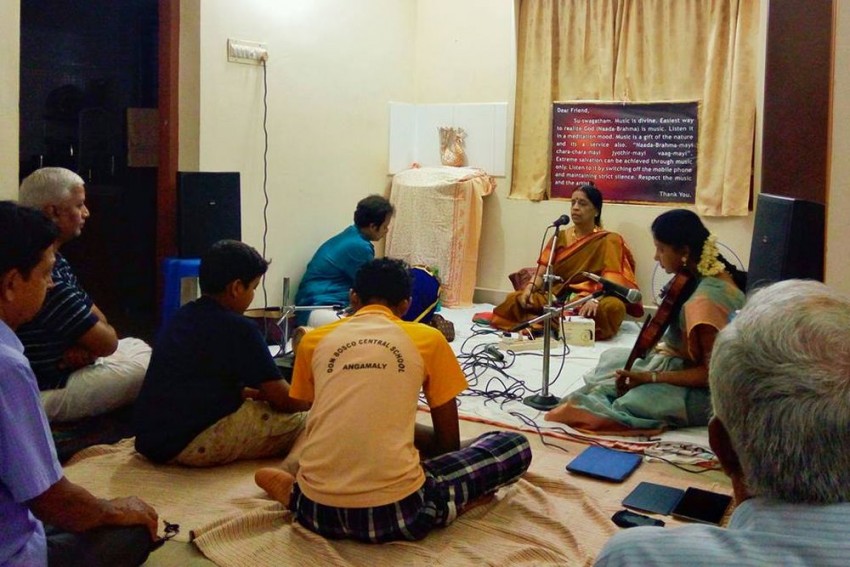 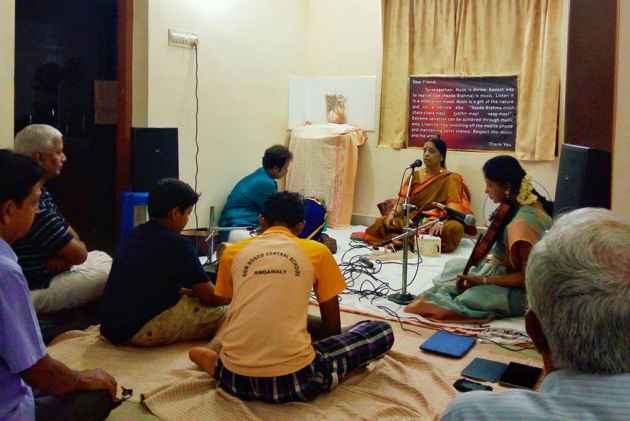 R. Padmakumar vividly remembers how the outburst of the Sri Lankan civil war affected his passion as an organiser of music concerts in a Malabar town where he was working as a youngster. It was in 1983, the very year the island-nation witnessed an armed conflict with its army and an ethnic minority, that a team of Carnatic musicians on a professional visit there had to rush back to Chennai, prematurely winding up the schedule.

If acclaimed vocalist M.L. Vasanthakumari lost some baggage in their hurried return home, young percussionist Tiruvarur Bhakthavathsalam had even lost his mridangam. “It was soon after that he visited us at Kottakkal for a concert,” recalls Padmakumar, who was then a staffer with the famed Arya Vaidya Sala healthcare centre located in Malappuram district of north Kerala. 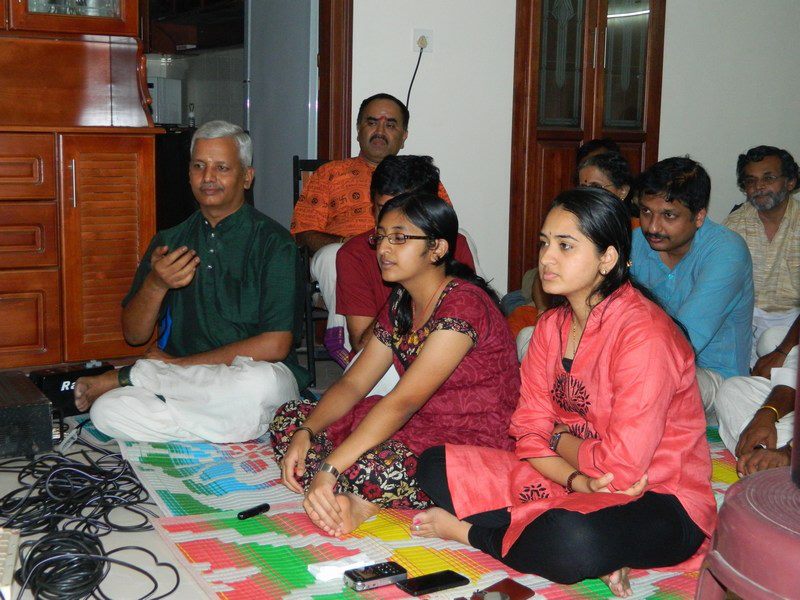 Bhakthavathsalam, a promising drummer aged 26 that time, had come to Kottakkal for a Carnatic vocal concert by T.V. Sankaranarayanan, who was to be accompanied on the violin by Thrissur C. Rajendran. That kacheri was a boost for a nascent cultural organisation called Janaranjini that had Padmakumar among the key functionaries. Today, in hindsight, the organiser-aesthete living near Kochi believes that his Kottakkal days gave him a thorough training on how to host classical-art programmes, particularly music. For the past one decade, Padmakumar has been organising fairly regular Carnatic concerts in the serene locale of Moozhikulam on the banks of the river Periyar east of Aluva in Ernakulam district of central Kerala.

It isn’t just the location that is the highlight of the programmes Padmakumar convenes, spending money out of his pocket—and that after having resigned from Arya Vaidya Sala way back in 2000 and not working anywhere thence. These are invariably small get-togethers, where hardcore rasikas not more than 60 assemble, in what are generally known as chamber concerts. At age 58, Padmakumar thus seeks to bring back to the new-age Carnatic circuit the near-lost charm of the relatively informal style of concert-giving. They promote close interaction between the artistes and the scooped-up audience, making each event an educational experience as well.

“When you say small, it only means we are a small group of listeners,” reminds Padmakumar, who was brought up in the heart of Ernakulam, which is downtown Kochi. “Actually, they are big, going by the duration. We have musicians singing for no less than five hours at our chamber (when the average span of Carnatic concerts is two to three hours). In fact, the young vocalist (Sunil Gargyan) who sang the other day ended up singing for five-and-a-half hours.”

It was in 2012 that Durbar got its present leafy venue in what is a neat cluster of well-built houses called Moozhikulam Sala. The organisation’s first four years were spent in a flat that Padmakumar had bought in Aluva town in 2008, having sold off his Ernakulam property near the vintage Siva temple by the Arabian Sea. “I must say I had had good apprenticeship at Kottakkal as an organiser,” he says with an amused smirk. “If I still know how to organise decent concerts with limited finances, it is from the lessons I got from my Janaranjini days.”

At that Kottakkal organisation that enjoyed no direct patronage from the Arya Vaidya Sala, Padmakumar and his small team of passionate organisers would hold cultural functions at a nearby lower primary school. “We would have a stage arranged by lining and tying up a set of wooden benches. Electricity used to be pulled from an adjacent home of an art-lover called T.S. Madhavan Kutty, who was, incidentally, an ayurveda physician at the Vaidya Sala,” he trails back. “We had very less members, who would typically chip in a donation of Rs 10. It was tough, but Janaranjini lasted for almost a decade.”

Nevertheless, it was an enriching experience with a variety of the arts. Janaranjini did not restrict itself to music; it hosted programmes of other classical genres. Thus were held, say, Kathakali shows by icons like Kalamandalam Krishnan Nair, Keezhpadam Kumaran Nair and Ramankutty Nair and a historic double thayambaka by frontline chenda drummers Pallavoor Appu Marar and Thrithala Kesava Poduval, besides a Koodiyattam evening by stalwart Ammannur Madhava Chakiar. “These are apart from the Carnatic concerts we held as the main stay: the frontliners included Semmangudi Srinivasa Iyer, Maharajapuram Santhanam, Puthucode Krishnamurthy, M. Balamurali Krishna…”

Cut to this decade, it’s mostly young musicians—men and women—that Padmakumar’s Durbar invites. “We ensure that it won’t be the routine concerts you hear elsewhere, including in Chennai,” he says, also bracketing the Tamil Nadu capital where Padmakumar has been a regular at the annual Margazhi music festivals for four decades now. “We would want out guests to deliver rare compositions, unfamiliar ragas, challenging ragam-tanam-pallavi formats and some off-beat things like a double-mridangam concert. Well, the sound amplifiers are ones I bought.”

Padmakumar’s struggles continue to weave interesting stories. It was only ten years ago, at the age of 48, that he decided to learn car-driving. “Not for my private trips, for which I never take my vehicle. It’s to pick the artistes from the railway station and drop them back after the concert. That is essential, you know!”

So, you arrange food from caterers for the musicians? “Not at all,” laughs Padmakumar, a bachelor. “I am not a bad cook. I like the kitchen work in any case. Even for accommodation, it’s mostly at my residence the artistes stay.”

Any regrets? “Well….yes,” he says. “I had these long and beautiful letters that top Carnatic musicians—vocalists, instrumentalists and percussionists—used to write in white papers spilling on to the third and fourth pages. Over time, I lost them.”

Papa You Are Getting Older, Daughter Ziva Reminds MS Dhoni On His 37th Birthday