It depends on the color and the cause... 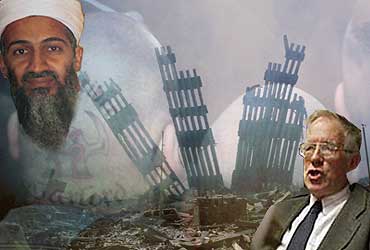 Members of his terrorist organization and network have killed Americans, on American soil. Those inspired by his message have engaged in a mass atrocity: blowing innocent people out of their offices as the building where they worked crumbled to the ground.

He himself has called for total war against the enemy in an effort to "cleanse" the United States. He has said that although innocent people will die in such an effort, "it is necessary, and because it is necessary, it is good." Seven years ago he warned of potential pending attacks when he wrote: "New Yorkers who work in tall office buildings--anything close to the size of the World Trade Center--might consider wearing hardhats to work..."

Osama bin Laden? Not even close. And unlike bin Laden, who is now a marked man despite little concrete evidence linking him to the attacks of September 11th, this individual has not been targeted for elimination by the United States government. No one is speaking of "bringing him to justice," or holding him accountable for the actions attributable to his associates and devotees.

And unlike bin Laden, whose whereabouts are unknown, the address of the person about whom I speak is well known. He is not in hiding, and doesn’t move around. He’s so easy to find that 60 Minutes’ Mike Wallace simply sauntered up to his home a couple of years ago and had a chat with him. His phone number is (304) 653-4600.

His name is William Pierce, and he lives in Mill Point, West Virginia, with a P.O. Box at the post office in nearby Hillsboro. He is a longtime neo-Nazi who calls Hitler the "greatest man of our era" and advocates the liquidation of all non-whites in the U.S.

His novel, The Turner Diaries (written under a pseudonym) apparently served as the inspiration for Timothy McVeigh’s attack on the Murrah Building in Oklahoma City, much the way we are told Osama bin Laden’s words have inspired Islamic terrorism, even if he is not directly involved in the planning process.

In Pierce’s book, white "patriots" blow up a federal building using the same materials as those used by McVeigh, packed in a truck like the one McVeigh used, at the same time of day as the one exploded by McVeigh. They then launch a race war, slaughtering non-whites, race-"mixers," gays, lesbians and Jews, before dropping nuclear weapons on Israel.

McVeigh was, according to former soldiers who served with him in the Persian Gulf, obsessed with the book, and inspired by its author. In the days before the bombing he sent clippings of the book to his sister, explaining that "something big" was going to happen, and when arrested had copies of Turner Diaries’ passages in his car.

Over the years, other followers of Pierce and members of his group, the National Alliance, have engaged in armed robberies, shootouts with law enforcement, and murders in at least a half dozen states. They have plotted to commit mass murder in multiple bombings, foiled only by premature detonation of the devices in question.

The Order--a neo-Nazi gang that committed a series of robberies and killed Denver radio talk show host Alan Berg in 1984--was led by Alliance members, including Robert Matthews who left Pierce $50,000 in life insurance benefits after his death during a shootout with the FBI.

Pierce’s weekly radio broadcasts regularly call for the elimination of anyone who isn’t white, and his group encourages members to raid military bases in search of weapons and ammunition. Yet no one is calling for him to be brought in "dead or alive" as President Bush recently did regarding bin Laden.

While President Bush and media pundits warn of bin-Laden’s associates "living among us," the National Alliance has at least 16 active cells nationwide, engaged in activity in at least 26 states, a membership hovering around 1,000, and thousands more listening to their shortwave radio broadcasts and reading the materials on their website.

On those broadcasts and the website, readers and listeners can see and hear Pierce call for "a racially clean area of the earth for the development of our people," with "no non-whites in our living space." They can hear him speak of the mass slaughter that he terms the "final cleansing," and the need to eliminate all Jews and race "traitors." For these latter groups he says, "we must hunt them down and get rid of them."

On August 15th of this year, Pierce broadcast the following message: "We really have become too civilized and have forgotten one of Mother Nature's most basic rules: Two different types of animal cannot permanently occupy exactly the same ecological niche. One eventually must drive the other into extinction..."

But despite the open support for mass murder, and despite the actual violence carried out by Alliance members and Pierce acolytes over the past two decades, few people are aware of this neo-Nazi terror network, nor does the President seem concerned about it.

After all, when have white guys ever been profiled just because some white guys like McVeigh, or Pierce, or others of their ilk committed atrocities, advocated murder, and engaged in criminal activity? The answer is never, of course.

Profiling and war are things we offer to those who look different from us, speak differently than us, and are easy to identify without inconveniencing the dominant majority. Arabs, Muslims, and people of color generally, make easy targets. Not so white guys. Not so William Pierce.

And homegrown white terrorists can’t be as effectively used to justify huge military buildups, or new powers for the CIA, as a perceived foreign threat can. For an Administration desperately in need of an enemy to justify its desire for massive new military expenditures, only the dark, dangerous image of the outsider will do.

As for Pierce, like bin Laden, he has proclaimed his innocence. Regarding the Oklahoma City bombing, he insists he had nothing to do with it. But also like bin Laden, he has not only failed to condemn the action others have sought to pin on him, but indeed he has all but praised it outright. About McVeigh, Pierce says:

"He did what he did for an impersonal reason, for an ideal...he has acted as a man of principle should act...He wanted to send the government a message that its behavior would not be tolerated. And part of that message would be the killing of the government's secret police agents--FBI and ATF--who worked in the building."

"The fact that his bomb would kill not only secret police agents but also civilians, including the 19 children in the day-care center, was regrettable but unavoidable: collateral damage...however regrettable the killing of innocent civilians in that bombing, Timothy McVeigh is no monster. He is a soldier, and what he did was based on principle."

When Muslim fundamentalists say things like this about terrorism carried out by their associates, we term it "giving aid and comfort" to the enemy, or "supporting terrorism." With Pierce, the same rhetoric is ignored, no matter what his loyal readers and listeners might do.

And while the media was quick to broadcast footage of select Palestinians celebrating in the wake of the World Trade Center attacks, they said nothing about the spirited discussions on National Alliance message boards, where members of the group were expressing elation at the day’s events.

Within minutes of the World Trade Center’s collapse, Alliance members were logging on to the group’s chat room boards to say things like: "the World Trade Centers (and) the Pentagon have had their noses removed from Jewish rectums and smothered in the heap of shit they created! I’m sure like me you are all jumping out of your skin with excitement right now!"

Or this, from a member in New York at the time of the attacks:

"...there is extreme chaos everywhere. Many people are helpless and in a state of panic. I am happy to have a reservoir of deep knowledge about this from all I have learned from the alliance...I AM STRONG, PREPARED AND IN CONTROL!!!"

Shortly after the attack, Billy Roper, the Deputy Membership Coordinator for the Alliance wrote: "the enemy of our enemy is, for now at least, our friends...we may not want them marrying our daughters...but anyone who is willing to drive a plane into a building to kill Jews is alright by me. I wish our members had half as much testicular fortitude."

Beyond merely pointing out that there are indeed white folks every bit as fanatical and dangerous as the members of al-Qaeda, and that indeed some of those were pleased with the most recent terrorist attacks on America, another point should be made.

If, as is likely, the renewed emphasis on "Arab terrorism" or "Muslim extremism" results in heightened suspicion and profiling of those who are Arab, Muslim, or appear to be, the result may be that America will let down its guard to these other kinds of dangers. The Tim McVeighs and followers of Bill Pierce will fly below the radar of the nation’s new security apparatus. No one will be looking for them.

This is not to say that such groups should literally be bombed, their members arrested, and those who look like them profiled. Just as such actions are ineffective and overbroad and authoritarian when applied to presumed Arab terrorists, so too would they be when applied to white supremacists.

But the inconsistency is worth noting, as is the danger that could logically flow from that inconsistency. If a member of the National Alliance, or some other group seeking to foment a race war wanted to commit a major terrorist attack, now would be the time to do it, as they would likely evade suspicion and detection, so busy are folks looking for danger with dark skin, long beards and a turban.

It is in this sense that any kind of racial, ethnic, national or religious profiling is an utter waste of time, and potentially capable of increasing the risks to innocent people, not to mention ethically unjust.

Terrorism has many faces, more than a few of which are white, just like those of most of the folks calling for war against Afghanistan. And yet never have they called for war against West Virginia. Nor did they call for war against Idaho when that state played host to the Aryan Nation’s compound: a place that had nurtured and inspired Buford Furrow, the individual who shot up a Jewish Community Center in Los Angeles and killed a Filipino postman two years ago.

So when you hear the President speak of "bringing the terrorists to justice or bringing justice to the terrorists," just remember that although all terrorists are equal in the eyes of the law, some are more equal than others.

(Tim Wise is an antiracist activist, writer and lecturer. He can be reached at tjwise@mindspring.com. By arrangement with Znet)

India: A Country Of The Future Forever