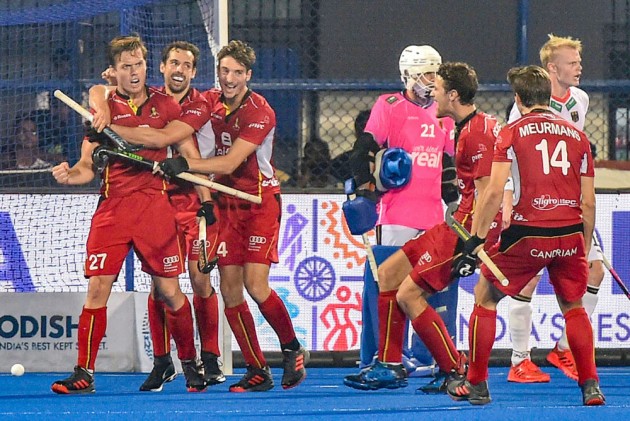 Three-time champions the Netherlands beat India 2-1 in a hard-fought quarter-final match to complete the last-four line-up at the 2018 FIH Men's Hockey World Cup on Thursday.

The Netherlands will play two-time defending champions Australia in a blockbuster second semi-final.

Earlier in the day, Olympic runners-up Belgium beat Germany 2-1 to book their maiden semi-final spot. They will play England in the first semis.

Both the semi-finals will be played on Saturday.

In the fourth and final quarter-final match, India took the lead with a 12th-minute strike from Akashdeep Singh.

But the lead lasted only three minutes as Thierry Brinkman scored a poacher's goal in the dying seconds of the first quarter.

It remained locked at 1-1 for a majority of the match, but with ten minutes left in the match, Mink van der Weerden scored from a penalty corner to give the lead to a more experienced team.

India's cause was further hurt by the absence of Amit Rohidas, who was served a yellow card with seven minutes left in the match.

With that, India's dreams of ending a 43-year long wait also ended in a heartbreaking fashion.

In the day's first match of the day, Belgium defeated two-time champions Germany 2-1.

World no 6 Germany’s lone goal came from the stick of Dieter Linnekogel in the 14th minute.

Belgium will now fight it out with England on Saturday for a place in the final.

The Red Lions were by far the better side on display considering the number of scoring chances they got in the opening two quarters.

Belgium got their first scoring chance in the seventh minute in the form of a penalty corner but they could not capitalise on that.

Germany, however, took the lead against the run of play in the 14th minute when an unmarked Linnekogel scored from the top of the circle after receiving a pass from Tom Grambusch.

Stunned by the goal, Belgium went for the offensive and secured three back-to-back penalty corners just at the stroke of the first quarter but could convert none.

Three minutes into the second quarter, Belgium secured their fifth penalty corner and Hendrickx scored with a grounded flick to level the scores.

The Red Lions earned two more penalty corners in the second quarter but again faltered as Germany defended in numbers.

Four minutes after the change of ends, Germany came close to restoring their lead but Timm Herzbursch’s shot from close range was kept at bay by Belgium goalkeeper Vincent Vanasch.

Ten minutes from the final hooter, Belgium got the all-important winner through Boon who scored from a rebound after skipper Thomas Briels’ initial try was saved by German keeper Tobias Walter.

Thereafter, the Red Lions went into a defensive mode as they decided to sit back and deny and scoring opportunities to the Germans.

Six minutes from time, Germany took out their goalkeeper for an extra player and tried to attack the Belgium goal in numbers in search of the equaliser but the winners defended well to make their first appearance in the semi-final of the quadrennial event.