'High Growth Is A Prerequisite For Inclusive Growth'

'We cannot end up with distributing poverty. We must distribute wealth,' says former finance minister Yashwant Sinha while talking about his recently released his book, My Years as Finance Minister: Confessions Of A Swadeshi Reformer. 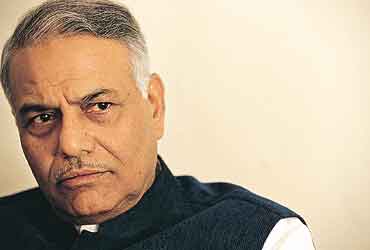 What are you trying to say in your book?

Basically it's an account of my time as finance minister. It's a narrative about the politics of all, the reform agenda, how we could implement it, my views on Swadeshi and a vision for the future. I tried to encapsulate the major systemic changes we made and how we made a paradigm shift in the economy.

Your tenure as FM had more than its share of controversies.

I could have taken them on in my stride but despite two decades in politics, I'm still a sensitive person. I haven't developed the thick skin of a politician. That is why it's more hurt that comes out in the book

What were the major challenges you faced?

The country was faced with unprecedented challenges (during the Chandra Shekhar regime). Never before had we faced economic sanctions. This is one period about which nothing has been written. That is why I have talked about the Chandra Shekhar period in the book -- the Balance of Payments crisis and how we managed it. I thought it was important to touch upon these issues in the book.

The Balance of Payments crisis was by far, the most challenging situation I have faced. If I have less hair and more gray today, it's because of that. It was the worst time to be India's FM because for three months of that tenure we were a caretaker government with no power to take policy decisions in face of such a situation.

That's when you introduced the gold mortgage scheme.

People have blamed me for mortgaging the gold but no one has looked into why we did it. The situation was very difficult and at that time, the country's izzat was more important to us than the gold. The country was on the verge of a default because in the Rajiv Gandhi era, we had borrowed in the short term and we were faced with a sudden death situation. At that time anyone could have declared us a defaulter. Will any family hold on to its gold in place of its izzat

What kind of political pressures did your economic decisions face?

There was pressure from all sides - from all the outfits of the Sangh Parivar like the Swadeshi Jagaran Manch, and the Mazdoor Sangh and also from the allies. Even within the government there were problems as many members were not in sync with our thinking. But full credit to Mr Atal Behari Vajpayee for handling the situation with the greatest skill. But despite reservation and hostility, there was a consensus on the reforms.

Your book says the framework of today's robust growth was laid by your government.

I strongly believe that, not indulging in self-aggrandizement. Today's growth is definitely because of the foundation laid in our time. There were many challenges but economic growth itself was a big challenge. Our Plan document which described our growth vision and targets was described by Sonia Gandhi as "Mungeri Lal ke Haseen Sapne". There was also challenge from outside the country because there was a global economic crisis (1998-2004) in East Asian countries, in Russia and in Brazil. This is when people complained that the 'Feel Good' factor was missing. That came back around 2004 along with high growth but we were voted out of power.

Do you agree with the present government's inflation control methods?

One of our most important decisions that is leading to today's high growth was a massive reduction in interest rates as a result of the strictest control over inflation which we brought down from the level of 14-14.5 per cent to under 6 per cent. This unleashed a consumer revolution, a housing revolution and made Indian industry competitive. Today we are reversing that trend and I feel concerned. I have been pointing out that this will have an impact on demand and so on production.

What are the other areas of concern?

We are getting good growth figures today but we should have managed high growth with low inflation and low interest rates. I am also concerned about the rising trade deficit. We had achieved a surplus in that. Now both Current Account Deficit and Trade Deficit are high and the government would have us believe that it's a virtue. It's not and its going to have an adverse impact on the economy..

How did you tide over the scams in your time, specially the UTI scams?

In the first crisis in 1998, we were able to find a solution as we had time. But in the second - UTI scam in 2001 - if they had come to us with the problem, we could have fixed it. But UTI said things were fine. So I personally felt cheated then.

The tax treaty with Mauritius was also an issue and your family was being dragged into it...

The treaty was signed by Indira Gandhi and the route was opened by Manmohan Singh and the tax case had been settled. Suddenly tax was being imposed on it and the same order was being passed from three different sources. So I had a suspicion that it was a conspiracy. And involving my daughter-in-law in it was the unkindest of all because they lead separate lives and I don't interfere in their work. Nothing came out of it despite my "well wishers" who rummaged through everything to prove it. It caused me a great deal of pain.

There was also a time when there was a demand to split the Finance Ministry itself. How did you stop that?

When I became FM, I heard that Jayalalitha wanted Revenue to be a separate ministry. In 1999, there was also a proposal to split the Finance Ministry three ways. On both occasions, I recorded my protests and Mr. Vajpayee agreed to my point of view. The matter ended there.

You have presented five Budgets. From the point of view of the reforms and the paradigm shift you talk about, which was the most significant?

The 2001 budget was the most significant and is till today, the most competitive agenda on economic reforms. We implemented some of those proposals while some are still unimplemented. And it was well received all over. My regret is that it was not given a chance to perform and show what it could lead to. That is also because we were all taken over by the market scams and many of the reforms could not be pushed.

Many feel that you brought in a new dimension to India's foreign relations as Foreign minister when you introduced the concept of economic diplomacy.

I really did not discover economic diplomacy. But it was the requirement of the time. Most of the diplomacy today is economic diplomacy. In international relations, no two sets of periods are comparable. There were of course other challenges in the foreign ministry, but my experience in the finance ministry and being a part of the global economic debate, it was possible for me to bring it to Indian diplomacy. There are countries with whom you cannot talk military cooperation. That is where economics comes in. I spoke about investment being a two-way street. I believed in smaller groups of countries. The IBSA (India, Brazil, South Africa) group is a concrete example of that and was done entirely by me. Even the India, Russia, China trilateral talks were both economic and foreign relations.

What is the fate of privatization under this government?

There is no privatization. They have put an end to the whole thing. It is just disinvestment by stealth. The policy of disinvestment (to make the Indian PSUs lean, mean and competitive) is gone. We are back to the old slothful days.

In what way do you want to see Swadeshi in India?

It is my firm belief that the weak cannot practice Swadeshi. You have to be economically strong to do that. You should be self-reliant with a capacity to produce and to import what you cannot. Then only we can talk of achieving Swadeshi.

So what is your vision?

I believe high growth is a prerequisite for inclusive growth. We cannot end up with distributing poverty. We must distribute wealth. The government has to ensure that the markets function in a transparent manner and the state has to play a role in removing poverty, not just individual poverty but family and national poverty. You may be a rich family but when you go abroad, you still represent a poor country. That notion needs to be changed.