Michael Hussey, who shared the dressing room with MS Dhoni for the Chennai Super Kings, said the 38-year-old Indian believes in the philosophy that he who panics last, wins the game 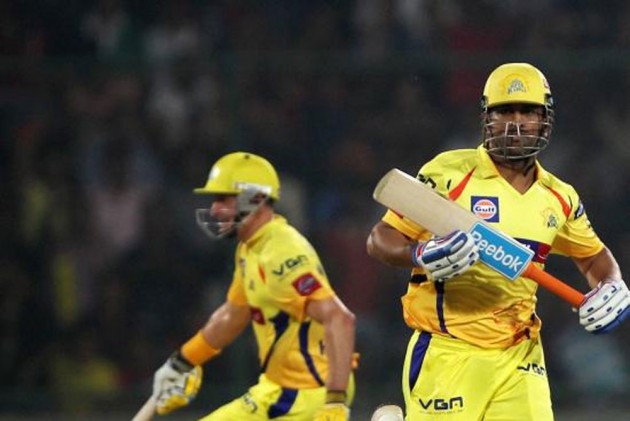 Former Australia batsman Michael Hussey has heaped praise on MS Dhoni, saying the veteran Indian wicketkeeper-batsman is the "greatest finisher" the game of cricket has ever seen. (More Cricket News)

"Dhoni is the greatest finisher of all time that the cricketing world has ever produced," Hussey said while speaking to Sanjay Manjrekar on ESPNcricinfo's Videocast.

"Dhoni can keep his cool and make the opposition captain blink first. Dhoni also has unbelievable power. He knows that when he needs to clear the ropes, he can do it. He has that kind of self-belief. Honestly, I didn't have that kind of belief in myself," he added.

The former Australian batsman, who shared the dressing room with Dhoni for the Chennai Super Kings, said the 38-year-old Indian believes in the philosophy that he who panics last, wins the game.

"I tried not to let it reach 12 or 13 runs an over," said Hussey while talking about his ability to finish the game without much hiccups.

"And I learnt this from MS Dhoni. He is incredible. He believes that he who panics last wins the game. So Dhoni would keep his cool, and keep it longer because the pressure is on the bowler as well," he added.

The 44-year-old believes that the greatest players of the game have a few common traits like "they don't hang on to a defeat for too long. If they lose, they move on quickly. They don't let a loss or a win hamper their thinking".

"They are always consistent, and level headed whether it's MS Dhoni or Ricky Ponting."

Hussey, who played 59 IPL matches for CSK, further revealed the secret about the franchise's success in the Indian Premier League.

"Supportive owners who let coach Stephen Fleming and captain Dhoni decide how to run the team, excellent chemistry between the coach and the captain, Dhoni's leadership and lastly the foresight of the owners, Fleming and Dhoni to pick the best players, particularly the good Indian players and then stick with them for as long as possible."

"This has built an excellent continuity in the team. And once you have continuity, you build relationships and trust that otherwise takes time to grow," he added.

Hussey also said that once Dhoni bids adieu to the game, CSK would probably like to start all over again.

"That's a 60-million-dollar question, and I am equally intrigued. I believe the owners would like to keep Dhoni involved in some way or the other," said Hussey.

"However, whenever the change of guard happens, CSK might want to start all over again, build a brand, new team, and use their existing philosophy as they enter the next decade of IPL. It is definitely going to be more challenging in current times," he added.

Dhoni was supposed to lead CSK in the 13th IPL edition which now stands postponed due to the coronavirus pandemic.