He Taught In A College...

I see that the world continues to move on as if nothing happened, people continue to lead their lives normally, despite the fact that an elderly college professor was murdered in broad daylight by goonda elements. Was the only fault of my father for 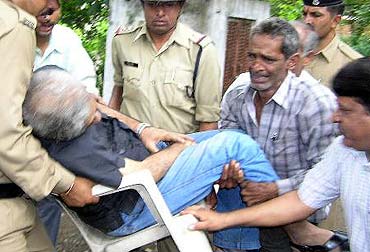 
Nagendar Sharma: What is the main reason behind the threat posed to teachers’ security and respect in institutions of higher learning in India? Is it student politics or indiscipline?

Ragini Nayak: I feel that when we talk about teacher-student relations, which, in India, are traditionally better known as guru-shishiya tradition, then we should be looking at the society in its totality. Changes in social values can be seen in parents- children, husband-wife relations as well. We can always discuss whether changes have been good or bad – but changes have been there, and these changes are also reflected in teacher-student relations. When we look at the recent incidents like those in Ujjain, Chandigarh and Meerut, I have no hesitation in saying, being the elected representative of largest university in the country, that after such incidents, the student community of the country does owe an apology to their teachers. No matter whatever be the reason behind provocation, nobody should have gone to the extent that an elderly college professor had to lose his life. The students are to blame.

Dr Amardev Sharma: Well, the question of teachers' dignity is the main issue today. Having been a teacher for more than three decades now, I cannot live without students as they are an essential part of my life. Now, if they are not behaving in a dignified manner acceptable to society, it means their teachers have been found wanting somewhere. About the Ujjain incident, I am so sad that it would be difficult to translate what I am going through in words. Let me make it clear that I am not against politics, but the question is what is the kind of politics being practiced in campuses? If it is not issue based, and the organisations which claim to be leading students have become insensitive to campus dignity, then we are definitely heading towards a major crisis.

Listener from UAE: I feel that the teachers and political parties are responsible for turning the colleges and universities campuses into political battlefields in the country. Why don’t you have the courage to clearly say politics should be banned in campuses throughout the country?

Ragini Nayak: How can we say that politics should not be allowed in campuses, when the citizens of this country have a right to vote in the general elections of the country at the age of 18? Colleges and universities after all are the places where students get the chance for the first time in their lives to cast their votes and make a democratic choice. In fact, according to me, it is the first training in democracy for young India. We have seen many student leaders who have done well in their lives in politics and other spheres. One or two isolated incidents cannot be —and should not be —used as an example to ban democratic activity in campuses. It is easy to talk about indiscipline among students and how they are no longer the "ideal students" and how they have forgotten their primary duty of studying. Let us also have a debate about how ideal are the teachers now – what kind of examples are they for students to follow?

Dr Amardev Sharma: A larger issue and a bigger question is involved here: Would higher education survive in the country or not? Under attack from Bretton Woods twins — the IMF and the World Bank — governments in developing, and, especially bigger developing countries like India, are being forced to reduce their role and investment in higher education. Now, when the fees is being raised, facilities are being reduced, teachers and students are more likely to protest for their rights. Therefore protest are not wrong, nor is politics — but use of money and muscle power to win students elections by professionals — which cannot be defined as student politics —that is where the root cause of the problem lies. This, in my view, is the biggest challenge faced by student organisations and colleges/universities administrations. If they are able to inculcate a culture of issue- based student politics, it would survive — if not, then I think it is in for bad days.

Listener from Delhi: I feel that it is the teachers who use the students in colleges and universities to further their aims and a law should be brought to ban politics completely from educational institutions and teachers should not be allowed at all to incite students. What do you say?

Dr Amardev Sharma: I can understand there is a feeling in the country that no politics should be allowed at all. The immediate and main reason behind this is the brutal killing of our colleague in Ujjain, with whose family we would stand every inch in their fight. I think it reflects on the organisations behind such unpardonable happenings, and we should not be tarring the entire student community with such a wide brush. Look at the sequence of events in this particular case – first the chief minister of Madhya Pradesh Shivraj Chauhan said it was an accident and then a few days later he said the matter is being looked into. State President and secretary of ABVP, the student wing of ruling BJP in the state were named in the FIR — which shows that violence in campuses has state patronage in some cases, which is a very dangerous trend and that is what I mean when I talk about a distortion in politics. An exchange of ideas in the campus, sharpening oratorical skills, enhancing your general awareness about topical issues and even ideological leaning — I see nothing wrong in all this, but the distortions are a disturbing area and that is where the challenge lies.

Nagendar Sharma: We would now talk to Himanshu Sabharwal, son of Professor H S Sabharwal, who was murdered in Ujjain in a college campus. Himanshu, it is obviously not a good time to talk to you, but please share with us: What is your family going through now?

Himanshu Sabharwal: We are being denied justice and, honestly, I have very little hope that justice would be done to our family. Frankly, how can we expect justice when public prosecutors in the case belong to ruling BJP and leaders of its student wing ABVP are directly responsible for my father's murder?

Nagendar Sharma: You are unhappy with the state government. Are you pointing a direct finger at Shivraj Singh Chauhan government of Madhya Pradesh ?

Himanshu Sabharwal: I can elaborate this by pointing out the way prosecution has been behaving so far. Police shifted the accused ABVP state president Shashi Ranjan Akela from the custody to a hospital claiming he was sick. In such circumstances, how can you expect the police which is totally biased to investigate the case fairly?

Deliberately a weak case is being presented in front of the court, because the motive of the state government, district officials and the prosecution is clear: All of them want to help the accused.

It is extremely surprising and disgusting that the chief minister has changed his stand and, retracting from his earlier statement, he is now saying that there would be an impartial probe, whereas he had earlier declared that this incident was an accident.

Nagendar Sharma: Do you think a fair probe into the murder of your father is not possible? What is your demand now?

Himanshu Sabharwal: How can the probe be impartial in such circumstances when you have a chief minister who yesterday said something else and is now speaking in a totally different language? Not only this, the public prosecutors are biased and instead of helping the case, they are helping the accused.

I have no hope from the state government, therefore I am meeting the state governor on Monday and I am also trying to meet President APJ Abdul Kalam and I would also petition the National Human Rights Commission (NHRC) to demand justice for my family and get the culprits booked.

I have been extremely disappointed with the general response to this entire incident. I see that the world continues to move on as if nothing happened, people continue to lead their lives normally, despite the fact that an elderly college professor was murdered in broad daylight by goonda elements. Was the only fault of my father for which he had to lose his life that he taught in a college?

One would have hoped that people of the country would have taken to streets in protest against such an unpardonable crime committed by those who are being shielded openly and directly by Madhya Pradesh government. It has happened with our family, what is the guarantee that this would not happen to any other family? If people of the country do not wake up, then next could be anybody's turn.

Dr Amardev Sharma: Himanshu, you are not alone. We are all with you. At least on behalf of Delhi University teachers, I can say that we would not tolerate this injustice. We have already condemned this unpardonable incident and the pain of this boy, who lost his father for no fault of his, must be understood by the nation. Ragini Nayak said she represents the students of the largest university in the country, I would like to ask her why did they not take to the streets when the news of this murder first became public? In my view, the students in this country should have sent a stern message that they would not endorse such incidents.

Ragini Nayak: Mr Amardev is telling Himanshu that he is not alone. I feel that more than sympathy, the Sabharwal family needs solidarity. I am not in favour of politicising a teacher’s murder. Who committed the crime is amply clear and the nation knows it. However, in my view, it is more important to go into the reasons behind this and find out why this happened and all efforts should should be concentrated in the direction that such acts are not repeated.

Dr Amardev Sharma: My view is that such acts take place due to lack of issues in student politics, till the time student politics remains issue-less and lacks accountability, such incidents would continue to take place.

Ragini Nayak: I think when the talk is about accountability, it should be in totality. Students have to complete their attendance and sit in annual exams each year — there should also be a talk about teachers' accountability. Delhi University teachers continue to evade the issue of accountability, despite this being on the agenda of council meetings for more than three years now.

Don't Equate It With Patriotism