'He Is Very Approachable' 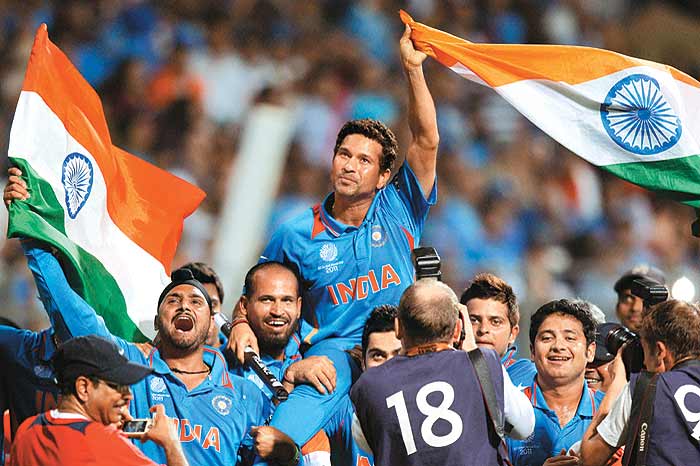 Currently one of the better all- rounders in the world and Sri Lanka’s T-20 captain, Angelo Matthews considers Sachin Tendulkar his hero. Here’s Matthews opening up about Sachin, his impact on Sri Lankans and much more.

Growing up in Sri Lanka what impact did Sachin have on you as an aspiring cricketer if any?

Angelo Matthews: Sachin was definitely the guy you turned on your television to watch and he was the one, along with the likes of Brian Lara, Jacques Kallis, Aravinda de Silva and Ricky Ponting that were the really dominant players when I first started playing school cricket. There’s no denying that he was definitely one of the cricketers who really inspired me to become a professional cricketer.

How was it to look at him as an opposition player playing against your own team— was it that you wanted to see him bat or want him dismissed as early as possible?

Given that he is so good, you obviously want to see the back of him as soon as possible when you are playing against him. I am happy to watch him score runs against other teams though! That’s when you enjoy watching him bat. Against your own team, Sachin staying out for long means he will pile on the misery for you.

Having suffered a number of injuries yourself, how difficult do you think it is to retain this level of fitness at age 40? He too has suffered many injuries but has always made a comeback.

I think Sachin has been pretty clever about managing his workload and looking after his fitness, especially in recent years when he has reduced his workload. He picked his ODI tournaments in the last three years and it was a wise decision. Any cricketer that plays close to 25 years of international cricket is going to have injuries. The key for him will be to work really hard on his fitness and also resting enough to stay fresh.

Having played a lot of ODI cricket against him do you agree that he is the best ever to play the 50- over game?

In terms of batsmen, he is obviously right up there in terms of the greatest, but there are a few other candidates who would need serious consideration if you talk of all round ability. But as I said as a batsman he has little parallel.

When you bowl to Sachin what exactly goes through your mind— what do you think as a bowler is the best way to get him out?

You obviously want to steer clear of his pads as he is exceptionally strong clipping through the on-side. For me I just try to keep a really tight line and make sure I don’t give him easy scoring opportunities. He is so good that even on your best days he can punish you so the key is to be as tight as possible.

Talk a little about any personal interaction you have had with the man?

I have not had a lot of one-on-one personal interactions with him over the years but we’ve had a few conversations and he seems to be a really helpful guy. He is very approachable and that is a quality I seriously admire.

Having played in South Africa recently do you think Sachin can still be successful against the South African bowling attack at 40 plus now that he is almost determined to make the tour to South Africa in November 2013?

Sachin knows his game well enough and if he is fully fit and mentally fresh then with his skill and experience you would expect him to be able to score runs. It will be a great test as the South Africans have a very good pace attack. Will make excellent viewing for the fans all round the world.