Going Around In Circles

Why don't the cerebral citizens of Delhi, happy with CNG, metro rail and radical votaries of Euro V (that would cost the country only Rs 18,000 crores), take a cursory look at any decent map of Delhi and discover its circular railway line? 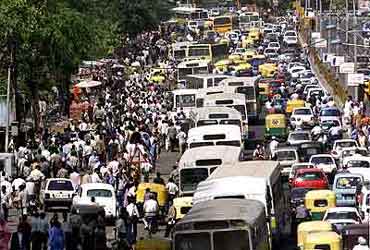 outlookindia.com
-0001-11-30T00:00:00+05:53
Before ASIAD, or Asian Games 1982, New Delhi had a population of 2 million. No one gave much thought to the fact that burgeoning trade and commerce brings in its wake job seekers from Patna to Jammu, maidservants from Murshidabad, labourers from Orissa. Suddenly, post-ASIAD Delhi became a major financial and commercial hub, which saw its population exploding to 10-15 million people.

The wisdom of making the capital city of such a large country its financial hub was questionable (Brasilia, Washington DC are almost 100% government cities), but for the time being let us leave it at that. With the demise of Calcutta, Delhi is the single point destination for the entire 10th class pass category and upwards in northern India. As the city and the commuters grew in an unorganised manner, the powers that be went on adding buses and routes -- in addition to the much maligned DTC, Blue Line, Red Line etc. were brought in.  Bus Drivers holding valid licenses were the exception rather than the norm. In its wake followed new horror stories like children getting run over .

The concerned cerebral citizens of this city suddenly realised that the air had become grey. How? Those blasted buses! When they were not running over people, they were throwing filth in the very air that we breathed, they discovered. Something had to be done.

As an answer, the great worthies from the Center for Environment Studies, TERI, judiciary and Animal Lovers Forum discovered the Euro series (now Bharat series). Great Discoveries bring in their wake even greater discoveries. From Euro/Bharat I we went to Euro/Bharat II to III. We had left Newton, Einstein, Bill Gates and Amerigo Vespucci far far behind.

The other day on STAR TV, one well spoken lady even suggested, with great conviction and vigour, conversion to Euro/ Bharat V costing the taxpayer a mere Rs.18000 crores. All that needs to be done, she offered,  is to scrap the present refineries and get new ones, which will give you very clean fuel, and the car makers can make a matching investment for vehicles that can digest it. She almost had the Petroleum Minister choking (tears or laughter, Rajdeep Sardesai can confirm).

Then came the greatest discovery of all. The cerebral citizens of Delhi discovered CNG. The panacea to our breathing problems was heralded with much fanfare. The fuel to run our buses, taxis and autos, had been found. The fuel with the healthy exhaust had arrived. Visions of people with their noses shoved into the exhaust pipe of a DTC bus, breathing pure air began to capture popular imagination. "This fuel has not been successfully proved in any major city in the world," the skeptics warned. "No problem," countered the experts, "Delhi will now show the world what CNG is all about!"

Another discovery is in the pipeline. The great Delhi Metro Rail is in the offing. Being constructed at the cost of Rs. 300 crores/ km. The whole gig will cover a 100 odd kilometers when completed in 15 years time.

These were heady times. For a country bumpkin a la George of the Jungle, who had just come in from Andaman Islands (we didn’t even have Internet there), this was exciting. We were really going to have an International class city in India. I was thrilled with the very idea.

But, then two things happened that left me ruminating..

The first was when I saw a seventyish Sikh auto driver (or at least one who looked seventyish), queued up for CNG.

Nothing extraordinary in that. Only that the temperature outside was 44°C. The man must have been in queue since morning, and looked another couple of hours away from getting his tank filled. There was this palpable expression of pain on his face. And yet, with a ramrod straight back, the old man was pushing his auto with a great sense of purpose, as if that was the most important thing in the world.

His total demeanour seemed to mock the great cerebral think tanks/decision makers of the city, the ones who discovered the Euro/ Bharat series, CNG and similar discoveries still to come. Did any one ask the wise lady from Environment studies, the spirited campaigner for Euro V, the great defender of CNG, what it's like to queue up for eight to sixteen hours, once every thirty six hours for the greatest fuel on earth?

The second? I bought the Eicher road map of Delhi.

The first thing that I noticed in the early pages is that Delhi has a circular railway line. It is not just a circle, rather a circle with well spaced out spokes (five and a half) going outwards. How come no one talks about this solution for Delhi’s transport problem?

I made a few enquiries. "Why don’t you take the Ring Rail to come to Nehru Place?" I asked some friends from Rohini. No one had even considered this as an option. The reason is not difficult to find. Not enough trains. "You have about 12 local trains running on Ring Rail in the day," the Northern Railways announced proudly a few days back. Bombay has as many running on one track in an hour and it has four such tracks in Western Line, four such in Central Line and two in Harbour Line. That makes it 120 locals in an hour.

Now take a look at the railway stations in the city. Great care seems to have been taken to make them as inaccessible as possible. Safdarjung station  is hidden away somewhere in Chanakyapuri.  Chanakyapuri station is somewhere near Dhaula Kuan.

The commercial complexes are another story. Nehru Place, Aurobindo Market, Bhikaji Cama Place -- to name only a few at random -- are as inaccessible from the Ring Rail as one can be. Even today, there is no dearth of empty spaces near the Railway stations. Nothing stops the railway stations from becoming commercial complexes. In Tokyo, for example, one comes out of the train, and straight away takes an elevator to one’s office. New Bombay is also coming up with this concept. Why can’t Delhi?

Picture this: there is a suburban train stop at all roads crossing the ring rail and its feeders; there is a local train available at all stations every five minutes; all buses in Delhi start from colonies and terminate at the nearest rail station. Changing over from Faridabad line to Ring Rail will then be a five-minute wait at best. Incidentally, the Faridabad line runs very close to Nehru Place. The only problem is to get to Nehru Place from the nearest station.

The papers often bring out articles about a few individual cases who have taken the Ring Rail on a lark and have been pleasantly surprised at the speed and comfort with which they arrived at their destination. That too, at a very nominal cost. But talk about it and chances are you would be told that Delhiwallahs are hardcore car drivers and will drive to office in their Santros, come what may..

The fact is that there is a huge population in the income group of Rs 1.5 lakhs/month who drive to work not because they love it, but because they can’t digest the idea of bus travel anymore. It's infra dig. But the few adventurous individuals who have tried it out during the recent CNG crisis/drama can attest to the relative speed, affordability and comfort of suburban trains.

Why then do we even refuse to give the run of the mill suburban train concept the attention it deserves? The basic infrastructure is in place. The tracks are there, the electrification is there, stations exist. Yes, investment is required in signaling systems, a few more stations at major crossings, bus terminals near each station, some additional manpower to handle more trains and a hundred odd rakes. Pizza stands, tea/ coffee dispensers can come up to spruce up the stations. The total cost will be well under the per km construction cost of the metro.

With office complexes coming up as part of the suburban station, road traffic will cover much shorter distances. Most bus routes can head to the nearest station. Suburban trains being electricity-driven, are the most energy efficient mass transporters. They also do not emit any particulate emissions. What's more, the need to instantly spend Rs 18,000 crores to update (shorthand for scrap and buy new) our refineries will be obviated too. Euro/Bharat V norms can come with sufficient notice (till my ancient Euro I Zen becomes scrap worthy).

Seventyish auto drivers should not be queuing up for eight hours at 44°C for a tank of CNG and then again after 36 hours. Even Mel Gibson took 48 hours.