A former foreign minister of Pakistan and a former Indian high commissioner in Islamabad on whether General Musharraf can be trusted after the latest disclosures in his book. 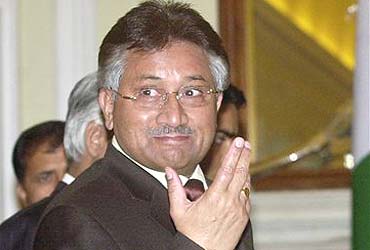 Nagendar Sharma: Can General Perez Musharraf be trusted after the latest disclosures in his book, In The Line of Fire?

Satish Chandra : In my view General Musharraf cannot be trusted and I have firm reasons to say so. In his book he has talked about Indian nuclear programme being based on Pakistani centrifuges, now this is the biggest lie. The fact is that Indian nuclear weapons programme is neither based on their centrifuges nor is it Uranium based—our programme is plutonium based. Next, Gen Musharraf has written a lot of things about Kargil, which are totally untrue and I know this as I was the member secretary of Kargil Committee set-up by government of India. I would like to remind you about the General’s interview to Khaleej Times in May 2001, in which he had himself admitted that leaders have to speak lies at times and that he also has to do it—do not forget, since student days, his friends used to call him Tricky Mush.

Sartaj Aziz : Well, it has become a trend in the world for leaders to write autobiographies, and we should not forget that such books are an exercise in self-protection and promotion. General Musharraf is trying to make use of the prevailing mood in the world against terrorism. So far as Indo-Pak relations are concerned, leaders on both sides must accept the fact that people of India and Pakistan want peace and friendship, and playing the blame-game would not help anyone.

Listener from Ambedkarnagar : Sir, General Musharraf has said in his book that talks between him and Vajpayee had reached a decisive stage at Agra, and that someone above both of them vetoed the outcome of this summit. What do you say? Is President Musharraf referring to hardliners in the BJP ?

Satish Chandra : If there was anyone above two leaders in Agra, it was the almighty God. Despite whatever General Musharraf may have written in his book, the fact remains that no agreement could be reached because Pakistan was not ready to act on terror. General Musharraf insisted on distinction between freedom fighters and terrorists. Tell me, with such a stance, how could an agreement be reached there? It was not because of anyone else, but General Musharraf himself that Agra failed.

The problem here is also the over-enthusiasm our leaders display in being friendly with Pakistan whenever the top leaders of two sides meet. Look at the recent Havana joint statement. Now we have agreed to have a joint mechanism on terror with Pakistan—in my view, this would prove to be counter-productive. It is known the world over that not only today, but since the last 50 years, Pakistan has been openly aiding and abetting terrorist activities in India, and by agreeing to this mechanism we have given away the psychological advantage we had on this issue. By this joint mechanism, we have ended up equating ourselves with Pakistan on terrorism, which was not required. It is Pakistan which has been using terrorism as a foreign policy tool and not India, then why should we have a mechanism with a country which uses terrorism as an instrument as a part of its state policy?

Listener from Mumbai : Mr Aziz, do you agree with what General Musharraf has said with regard to Kargil in his book ?

Sartaj Aziz : Well, General Musharraf’s account does not tally with what India’s Gen V P Malik has said in his book. General Musharraf is right when he says that historically both countries were violating the LoC spirit and also that Kargil was a defensive operation. However, I do not agree with General Musharraf’s view in his book that it was Kargil which helped in bringing back the Kashmir issue to international focus. In fact, Kargil led to disruption of Lahore process initiated by Nawaz Sharif and Atal Behari Vajpayee. The military takeover completely destroyed the process.

Nagendar Sharma : Mr Aziz, General Musharraf has also said in his book that Nawaz Sharif and his cabinet were fully aware about Kargil since the very beginning. You were the foreign minister at that time, what do you have to say?

Sartaj Aziz : This statement of General Musharraf is not correct. He has mentioned about the date of February 5, 1999. I was present in that meeting. Discussion was held regarding the road disruption along Neelum valley and the possibility of an alternate road. Kargil was not mentioned in this meeting. I would like to say that some of the things said about Kargil in the book are not correct. I would agree with some of the things he has written about Kargil, but not all.

I also do not agree with General Musharraf that the political leadership lost the gains made by the Pakistan army during the Kargil conflict. It was Mr Nawaz Sharif who, during his visit to Washington, when the conflict was on, resolved the matter in a way which benefitted both India and Pakistan. The military option cannot solve any problem between the two neighbours, military entry point could not have solved Kargil and, for that matter, this option would not be able to solve anything between the two South Asian neighbours.

Nagendar Sharma : Mr Satish Chandra, when India feels so strongly about cross-border terrorism, then why does it fail to place its view at the international level effectively? Many countries do not accept what India says about violence in Kashmir...

Satish Chandra : Well, India does place its views on terrorism effectively, but the West does not show interest in it because in the view of many countries, Pakistan’s support to terrorist activities in India does not affect them. This is a fallacious impression, as in our view terrorism mutates and it does hurt the West also. Look at 9/11 attacks, I say that the US itself was responsible for those attacks, as it has been historically supporting Pakistan and it was the result of this support that rabid terrorist elements continued to flourish in Pakistan with the active support of ISI, which is the biggest supporter of terrorism in the world.

Nagendar Sharma : But Mr Chandra, why is Indian leadership not consistent in its ties with Pakistan? A look at the past decade shows flip-flops from Indian side. Atal Behari Vajpayee’s Lahore visit was followed by Kargil. Then, later Mr Vajpayee was perhaps the first leader in the world to legitimise General Musharraf’s decision to elevate himself as President just before Agra summit, the failure of which was followed by attack on the Indian parliament, and now barely two months after Mumbai blasts, present prime minister Manmohan Singh signs Havana joint statement. Why?

Satish Chandra : This is because Indian leadership is so keen on good relations with Pakistan, and in this over-enthusiasm our leaders go much beyond what the existing ground realities would permit. It is strange that our leaders in a bid to revolutionise our relations with Pakistan tend to reach the point of no return, as ground situation cannot support their excitement. Aspirations of leaders are divested of reality and that is why India has to meet with failures time and again.

Sartaj Aziz : I would like to say that the Havana joint statement is a good step and should be sincerely taken forward. It is always helpful to have a joint mechanism. Mumbai blasts is a good test case for this mechanism. If a joint investigation could be carried out for Mumbai blasts, then the evidence would be credible in the eyes of international community. If those who have been arrested are made to go through joint investigation, then the case would certainly be solved and both nations would be able to reach to the roots of terrorism. Otherwise if you keep on arresting people and deriving confessional statements, it would not help either country.

Listener from Bhagalpur : Sir, Pakistan has in the past rejected all evidence provided by India with regards to involvement of ISI and terrorist organisations like Lashkar-e-Toiba in acts of terror in India. Would Pakistan this time cooperate in investigation of Mumbai blasts?

Satish Chandra : In my view, history is a witness to Pakistan’s inaction on terrorism. Look at Dawood Ibrahim and Maulana Masood Azhar. Both are wanted in many cases of terrorism in India, and have been roaming freely in Pakistan—is their leadership ready to hand them over to India? So far as the latest case of Mumbai blasts is concerned, even before looking at the preliminary evidence, Pakistan rejected it. So to hope for anything from that country would only be like living in a world of illusions.

Sartaj Aziz : Well, if one was to blame ISI, then Pakistan can also turn around and easily point to the involvement of RAW in sectarian violence in our country. The fact is that India and Pakistan both have been victims of terrorism. We have been facing acts of terror from elements who infiltrate from the Afghan border and commit violent acts in our territory, so pointing fingers would be of no use. The need of the hour is to jointly fight the menace.

Listener from Lucknow : Mr Sartaj Aziz, how do you react to General Musharraf’s assertion in his book that Kargil was a victory for Pakistani forces?

Sartaj Aziz : Technically, in the short run, one may say so. However, it is difficult to establish the victory or loss in a conflict after the ceasefire. From army's point of view, this may be different, but once both countries decided to return to normal positions, victory or loss cannot be claimed.

Nagendar Sharma : How do you perceive General Musharraf's rule?

Sartaj Aziz : General Musharraf is trying to elicit the support of different countries in the world on the issue of terrorism. However I feel that issues concerning Pakistan can only be solved when there would be a true democracy governed by rule of law and supremacy of the Constitution . Unfortunately, General Musharraf's book does not spell out a roadmap for any of these essentials of a democracy.