From The Fire Into The Frying Pan

'The homosexual community in this country would much rather live in quiet anonymity than be misrepresented in such a ghastly, contorted fashion' 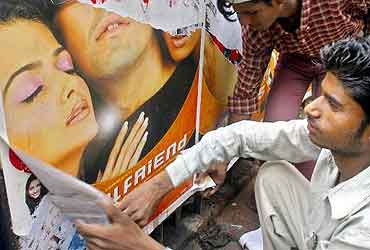 The RSS Chief K.S. Sudarshan went on record on June 14 in Nagpur to argue that the controversial film Girlfriend "seeks to introduce unnatural ideas of homosexuality in our society ... practices that have cost society dear and are responsible for new diseases like AIDS". He was on live TV expressing his "worry" about the effect of the film on the moral character of girls, and argued the movie "would encourage same-sex love, when countries like Australia are trying to pass laws against it...It is against our culture" This outburst came when he was asked for his views on the violent protests led by the moral police headed by Shiv Sena on grounds of the film being "objectionable and against Indian culture".

The contrast with the objections by the Lesbians, Gays, Bisexuals and Transgendered people (LGBT) activists could not have been more glaring.

Text of an open letter to Karan Razdan, the director of Girlfriend written after the premier of the film, much before the protests by the Shiv Sena and other 'guardians of Indian culture' broke out across the country by an LGBT activist:

This was supposed to be a film review. If the Shiva Sena and the Bajrang Dal go on a rampage yet again, to protest your film Girlfriend, and ask for the film to be banned or sent back to the censor board, I might even forgive you.

But I know, that six years after Deepa Mehta's film Fire was released, the right wing will see no reason to protest your film because your portrayal of a lesbian as 'a psychopath, sexually abused, man hating, murderer and killer' fits just fine into their hetero-patriarchal agenda of portraying lesbians and gays as freaks, abnormal and as people who must die at the end of the film, so they are aptly punished for their unnatural existence.

At the outset, it must be stated that the ''Lesbian' issue is a hot topic; it attracts audiences, creates a curiosity and definitely impacts the box office collections. I mean, if you were to tell me that you made this film because you care so much about lesbians and the issues affecting them, that you wanted to bring this issue into the public realm, into every Indian household, surely you mean it as a devastatingly, nasty joke! 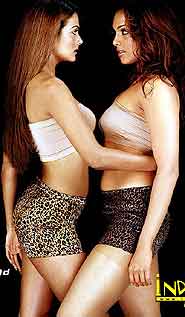 Your film is a presentation of the worst possible misnomers (I consciously refrain from using the word 'stereotype') about anyone who may be attracted to a person of the same gender. The male, macho but normal (read heterosexual) hero has no qualms about playing a hyper-exaggerated, sissy, gay man when he needs to seduce the simple minded, generous at heart, 'one-night' lesbian but basically reformed, heterosexual heroine, Amrita Arora.

The straight heroine who is being continuously misled by the lesbian villain must be saved by the good-boy-hero. In the end, values of heterosexual love, marriage and 'normal' families must be upheld. The character of Tanya, acted by Isha Koppikar is nothing short of a 'lesbian animal' aided as it is by the background score to help us see her as a wild, almost cannibalistic man-eating/man-hating woman who dares to behave like a man, a Sahela. All this of course is explained by the simple truth that she was sexually abused as a child--simultaneously implying that what makes women 'this way' is possibly, abuse at the hands of men!

After watching a film like this, it is impossible for anyone to think of 'women who love women' as normal human beings with two hands and two feet, who may be a friend, a sister, a mother, an aunt, a neighbour, a grand mother and least of all a caring lover.

It must be pointed out that under section 377 of the Indian Penal Code, gay, lesbian, bisexual and transgender people are looked upon as/considered criminals, existing against the order of nature. Hey! and if you thought it was just about 'those guys & their lifestyles', let me remind you that anytime you have non peno-vaginal penetrative sex, you are as much of a criminal and can be put in the prison for seven years or heavily fined or both.

Mr. Razdan, the next time you say that you are taking a neutral position in this film and portraying the case of just one lesbian, let me remind you precisely, that the fiction you are choosing is a cleverly developed and thought out story that carries a clear message. This message is a dangerous and retrogressive one. It is a message that endangers the life of any woman who may look or behave boyish, any woman who chooses to experiment with her sexuality, and any woman who asserts her right to different choices, even those women who are good friends and hold hands when they walk down the street.

Welcome to the world of blatant hate crimes based on your sexual and gender orientation!

As men or women, homosexual or heterosexual, films like these take us many steps backwards. More than two decades of work done by Lesbian, Gay, Bisexual and Transgender groups, feminists groups, human rights groups, women's groups and progressive artists groups, is going to suffer as this film is commercially released in every part of India from small towns to big cities.

Every time I hear of another lesbian suicide, another girl who hanged herself for being teased about her 'best' friend, another hijra woman raped in police custody, another woman sent for shock treatment and aversion therapy to cure her of her homosexuality, another couple put under house arrest by their parents when they find out about their same-sex love, I will think of this film and I will be reminded of the power that Bollywood wields in creating a mass consciousness of one sort or the other. In this case, it will be a conscious, articulated, homophobia.

Thank you very much Mr. Razdan, but we, as progressive citizens are not interested in lip-service. I can assure you of one thing: the homosexual community in this country would much rather live in quiet anonymity than be misrepresented in such a ghastly, contorted fashion. Even a little bit of research on your part would have revealed that there are at least three active lesbian and bisexual women's groups in Bombay city alone and hundreds of 'women who love women' leading their lives openly and happily but that's only possible, when one makes a film on a hot issue (like lesbianism is in India), when you foresee beyond profits and publicity and see real lives and real people who will live the consequences of your doing.

It's time that we stopped separating the issues that films address and their impact on the audience/citizen within a given socio-political context/environment. It is also high time that we stand in protest against any film that causes damage to the rights of any minority group.

Tejal Shah is a visual artist and the co-founder, organiser and curator of Larzish - tremors of a revolution, International Film festival of Sexuality & Gender Plurality, India since 2003

The Hollowing-Out Of Hollywood