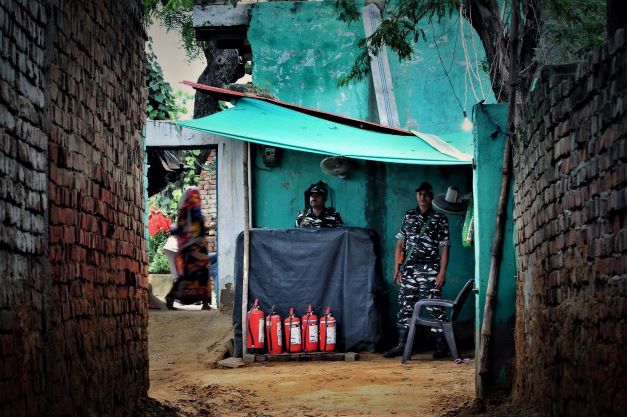 Seema Kushwaha was returning home from the SC/ST Special Court in Hathras in her car on September 18, when she noticed some people following her in a Toyota Innova. It was the third day of hearing in the trial of the infamous Hathras gang rape case. The alleged miscreants continued till the district border. The lawyer, who is representing the victim’s family, immediately reported the matter to Hathras SP Vineet Jaiswal.

Speaking to this reporter days later, she said, “It happened when a police escort was there in front of my car. I reported the matter to the court and the Hathras SP. Young female lawyers in my team, who attend court for the hearings, are very scared.”

Now, the family of the Hathras victim, who has been provided tight security cover by the Supreme Court, has demanded adequate protection for their lawyer as well. They alleged that Kushwaha is under immense pressure and has been threatened to withdraw from the case.

A Year Later, Hathras Victims Family Now Held Captive In Their Own Home

“It is a highly sensitive case. Our lawyer is under threat. If the government can give security to Bollywood actress Kangana Ranaut, then why not my lawyer too,” the victim’s eldest brother said.

The victim’s father has also expressed deep concern about the safety of his lawyer, and said if she feels insecure all the time, she cannot focus on the case. “I plead with the government to provide her with enough security for a fair trial. Along with our safety, our lawyer’s safety is also crucial for us to get justice in this case,” he said.

The case unfolded on September 14, 2020 when a 19-year-old Dalit woman was gang-raped in UP’s Hathras district by four upper caste men. Before she died in a Delhi hospital two weeks later, the magistrate was able to record her statement, in which she named all four accused. The incident hit the national headlines after cops forcibly cremated her body, allegedly without the family’s consent.

Kushwaha has herself made multiple requests for security, even writing to PM Modi and CM Yogi on August 1. “I get a lot of death and rape threats,” she said. “I get calls threatening me from random numbers on both my phone and that of my husband. While I’m in Hathras, I always feel threatened.”

She first alleged she was being threatened—inside court, by a gang of 15 lawyers—the day the trial began on March 5, 2021. “I flagged the issue with every concerned authority. It happened right in front of the judge. The moment court proceedings began, 15 lawyers verbally threatened me and asked me to withdraw from the case. They told me I should not cross my limit,” Kushwaha said.

She eventually brought the issue before the Lucknow bench of the Allahabad high court, demanding a stay on court proceedings and its transfer elsewhere. The high court ordered the district judge and Inspector General (central sector) of CRPF Lucknow to conduct a detailed inquiry and submit a report in a sealed cover. After examining both reports, the high court didn’t find any merit in Kushwaha’s allegations. “…we do not find any reason to stay the proceedings in session trial No. 538 of 2020 (Case Crime No. 0005 of 2020) pending before the Special Court (SC/ST Act), Hathras, nor for that matter to transfer the same elsewhere…,” the bench of justices Jaspreet Singh and Rajan Roy wrote in their order, dated August 26.

Though the court inquiry didn’t find any substance in her allegations, Kushwaha alleges the report of the district judge was biased against her. She also claimed she had received another threat to her life on September 2, the second date of hearing. She says unidentified people warned her to stay away from the case.

Kushwaha says that after multiple follow-ups, the Hathras SP recently intimated her that she would be given an escort, but only for the dates of the hearing, and that they will accompany her to court and back from the district border.

“I go to Hathras not only for the hearing, but also for other purposes related to the case. I go to meet the victim’s family since I’m their lawyer. I have to meet several other people,” Kushwaha said. “How can police think that the threat is only on the days of hearing, and that I can move freely in the district on other days?” she added, demanding regular and adequate security, as her life is at risk all the time.

Outlook spoke to SP Jaiswal, who dismissed all allegations leveled by Kushwaha. According to Jaiswal, Kushwaha never complained to his office in writing about the incident that allegedly took place inside the courtroom on March 5. He says he heard of it only when she raised the issue before the high court.

“Considering the sensitivity of the case, when the trial started on March 5, I decided to provide a police van with four personnel to Kushwaha from Hathras border to court premises and back to the border, for every hearing,” Jaiswal said. “I can only do that which is under my jurisdiction. If she wants some other category of security, she can approach the concerned authority. I’m doing my best so far as ensuring her safety in my district is concerned,” he added.

The investigative agency in this case, CBI, has its own set of lawyers to argue the case for the victim. However, as the victim has a right to have an independent lawyer, the family has chosen Kushwaha to strengthen their case.