'We're not attacking Islam but Islam has attacked us. The God of Islam is not the same God. He's not the son of God of the Christian or Judeo-Christian faith. It's a different God, and I believe it is a very evil and wicked religion.' 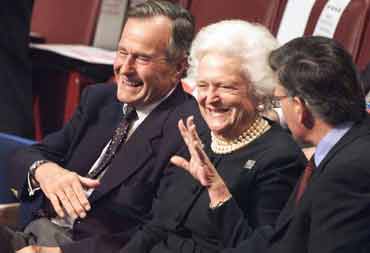 My subject is Franklin Graham, one of President Bush's very-public religious confidants. Franklin's father, Billy, served President Nixon in a similar capacity. Billy's efforts were crowned with a kind of earthly immortality: he's on those White House tapes in the National Archives sharing anti-Semitic remarks with Nixon and never flinching or clearing his throat over the idea of using atomic bombs in Vietnam.

Franklin has pretty well replaced his ailing father in leading the huge Billy Graham organization. You may wonder about religious ministries being handed down like fifteenth-century dukedoms, but the practice is fairly common in America, and several of the nation's big ministries - the type of outfits that might be characterized as Las Vegas Showstoppers for Jesus - have been handed down in this fashion. This happens in American politics, too. After all, a hand-me-down evangelist serves a hand-me-down President who ran against (and lost the popular vote to) a hand-me-down politician from Tennessee.

It's not that Americans accept aristocracy, but in a nation of insanely-frenzied consumers, an established brand name always still has some juice worth squeezing.

The youthful Franklin seems to have been a bit of a trial for his mom and dad, reportedly exhibiting more interest in sowing oats than saving souls. He had an obsession with guns one could interpret as slightly at odds with the message of the Prince of Peace. He may just have been reflecting the quaint traditions of America's Appalachian subculture - his home is the mountains of North Carolina - when he once cut down a tree by blasting away at it with an automatic weapon (I did not make this up). Apparently, he used to be fond of giving automatic pistols as gifts.

Well, at some point, I guess the lad realized he was burning out and going nowhere, and automatic weapons are expensive when you like to give the very best, so Franklin had something like the President's road-to-Damascus experience. I doubt he recalled Henry the Fourth's saying Paris was worth a mass (Henry of Navarre became King of France by adopting Catholicism). It would have weighed heavily that dad's ready-made, super-slick organization offered a handsome, steady income, all expenses paid, especially if Franklin had come to recognize that his next-best career option might be itinerant bingo caller.

Redemption is one of America's great ongoing themes. It's the spiritual extension of all the plastic surgery, injections, drugs, youth-inducing potions, diets, and tales of lives changed by lotteries or get-rich-quick schemes, but it does have to be the right kind of redemption. None of your consolations of philosophy, peace of the Buddha, wisdom of the Great Spirit, or following the Prophet will do. Lives lived decently and peacefully from beginning to end are not admired because they don't make juicy entertainment.

The approved American redemption-story template includes years of inflicting hell on others, often by abusing whisky or drugs, finally being overcome by frightful (drug-induced or otherwise) visions of going to hell yourself, and then spending the rest of your life annoying every person who crosses your path with the opinion that he or she does not know the truth. About 85% of the nation's country-and Western singers and about 95% of its evangelists spend their declining years sharing such tales in magazines, tapes, interviews, and sermons. It's a major industry.

This is all by way of background to Franklin's words about his new mission. I suppose it's possible Franklin thinks Nazareth is a trailer park somewhere in North Carolina or Texas which would account for his thinking that the people in the Middle East haven't heard about Jesus, but, in any event, Franklin is now going to tell them about Jesus, at least his gun-totting Appalachian version. Well, almost, but Franklin has probably been advised that proselytizing for conversion from Judaism is against the law in modern Israel. With a Bush-appointed Proconsul, that kind of law shouldn't get in the way of bringing the good word to Iraqis, although he'll be a bit late to save the souls of those smashed and broken by American bombs.

Franklin's organization, Samaritan's Purse, claims that it intends only to bring relief services and not evangelism to Iraq, but how valid can this claim be? The Billy Graham organization for decades has worked only to convert people to its narrow notion of Christianity. It has been criticized even by other Christians for the nature of its work - cranking out converts like sausages in a vast Midwestern meat-packing plant. Perhaps when Franklin created his offshoot relief organization, Samaritan's Purse, it was in part a response to this kind of criticism.

Franklin's own words on Islam over the last year hardly resemble a second Albert Schweitzer yearning to help fellow beings. His tone is militaristic and has the same nasty, parochial feel as the President's "us and them." One looks in vain for any generosity of spirit associated with the words of Jesus.

"We're not attacking Islam but Islam has attacked us. The God of Islam is not the same God. He's not the son of God of the Christian or Judeo-Christian faith. It's a different God, and I believe it is a very evil and wicked religion."

Franklin here makes no distinction between the nineteen individuals responsible for 9/11 and the world's hundreds of millions of Muslims, yet he seems never to have made the same kind of connections between criminals of other religious backgrounds and the religions themselves. Did the IRA's outrages elicit such comments about Catholicism?

"…the persecution or elimination of non-Muslims has been a cornerstone of Islam conquests and rule for centuries."

I suppose it would be foolish to expect any sensible perspective on history from a man of Franklin's limited learning. The work of people calling themselves Christians in countless wars, religious persecutions, and exterminations just since the Renaissance dwarfs the volume of spilled blood in all the rest of human history. The Holocaust, the African slave trade, and the extermination of many aboriginal peoples were the work of people calling themselves Christians.

"I believe it is my responsibility to speak out against the terrible deeds that are committed as a result of Islamic teaching."

Why should it be his responsibility to speak against these particular deeds and no others? Franklin certainly is not known as an advocate for the world's abused and downtrodden. One does not find him shouldering this responsibility over other terrible deeds, a number of them the dirty work of his own government. No, his time goes to "crusades," the word used for decades by the Billy Graham organization to describe its assembly-line salvation gatherings.

"There is no escaping the unfortunate fact that Muslim government employees in law enforcement, the military and the diplomatic corps need to be watched for connections to terrorism."

These are the words of a man teaching suspicion and fear rather than understanding and brotherhood. One has to ask what such comments have to do with evangelism or Christianity, but American fundamentalists often ignore Jesus' clear teaching on the matter and put their visions of government and secular affairs at the heart of sermons and pronouncements. This suggests that politics, and a particularly nasty kind of politics, is at least as much a driving force here as religion.

Franklin recently gave a Good Friday service at the Pentagon. Reading that, I had the absurd image of an early Christian preacher praying for Rome's Tenth Legion. True, there were probably no Christian legionaries at the time, but the fact remains that the purpose of the Pentagon is exactly the same as that of the legions, professional killing for the state and its policies, a purpose totally incompatible with any words of Jesus.

But of course, the more apt comparison would be a few centuries later when the legions did their bloody work for a so-called Christian empire.