Buoyed by Anil Kumble's 6-78, India added a new chapter to their cricketing history by scripting their first series win in the Caribbean in 35 years with a 49-run victory at the Sabina Park. 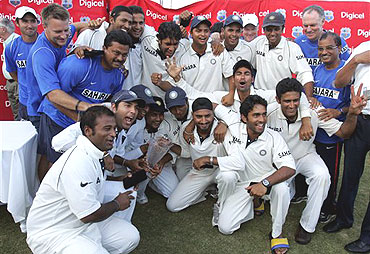 India scripted a new chapter to their cricketing history by securing their first series win in the Caribbean in 35 years with a 49-run victory in the fourth and final Test against the West Indies on Sunday.

The Indians snubbed a late fightback by the hosts who, chasing a target of 269, recovered from a top order collapse and took the attack to the rival camp before being all out for 219 on the third day at the Sabina Park.

Anil Kumble proved to be the talisman once again with six for 78 and single handedly hussled the West Indian lower order into submission to give India a memorable victory with two full days to spare.

India's last series win in the West Indies came in 1971 under Ajit Wadekar.

The 1-0 triumph was also the team's first outside the sub-continent in two decades - with the exception of the victory in Zimbabwe last year - since the 2-0 win over England in 1986.

Nevertheless, the Indians had to endure some anxious moments as the Caribbeans threatened to pull off a coup through a gallant performance by the tail-enders.

Young wicketkeeper batsman Denesh Ramdin hit an unbeaten 62 and lifted the home team from 128 for six through partnerships of 36 and 39 runs with Jerome Taylor (20) and Pedro Collins (3).

The last four West Indian wickets produced 71 runs and some flutter in the stomach for the visitors.

But the resistance cracked under the relentless pressure applied by Kumble who bowled 22.4 overs.

Speedster Sreesanth was another valuable performer with 3-38. The 22-year-old seamer provided the early breakthroughs before Ramnaresh Sarwan (51) and Dwayne Bravo (33) put on 70 runs for the fifth wicket to stem the rot.

Sreesanth triggered the slide with the scalp of Chris Gayle in his very first over and also claimed the other opener Daren Ganga before his first spell was through.

The Kerala youngster returned to get rid of Sarwan with a peach of a delivery which moved off the seam and took the edge of the bat to Rahul Dravid at first slip.

The scalp of Sarwan was the key in the overall context as the right-hander kept the innings glued with an extremely fine innings.

Sarwan first shared an hour-long stand with Shivnarine Chanderpaul (13) before the latter fell leg before wicket to Kumble, making West Indies reel at 56 for 4. 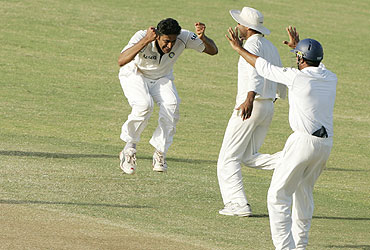 Then Sarwan and Bravo both departed within two runs of each other.

Bravo tried a mighty hoik on the onside against Kumble only to find his stumps rattled.

Bravo had got emboldened when similar tactics against Kumble in his previous over had produced amazing dividends.

He twice lifed Kumble over widish long on for fours and then slogged him on knees at the mid-wicket fence for third straight boundary.

Sarwan raised his half century from 94 balls when he off-drove Sreesanth to the fence.

Ramdin kept the fight going till the end with a lusty 84-ball innings that contained eight fours and a towering six off Kumble.

He nursed number 10 batsman Collins through a potentially match-winning ninth-wicket stand before the latter became Kumble's fifth victim of the innings.

The sixth wicket for the master leg-spinner in the form of Corey Collymore who tried to cut and was caught behind.

Earlier, West Indian pacers Collymore and Taylor cut short the Indian second innings to 171 to give the hosts a glimmer of hope.

Collymore picked his fourth five-wicket haul of 5-48 while Taylor, who claimed his maiden fiver in the first innings, returned with 4-45.

Dravid, India's vanguard of hope who was unbeaten on 62 at the start of the day's play, was dismissed for 68 after a delivery from Collymore kept low.

Collymore accounted for Kumble (10) when he got the overnight batsman to edge a catch to the slip cordon.

Harbhajan Singh struck a couple of hefty blows and Sreesanth actually slogged a six over long on against Taylor.

Sreesanth departed when he came down the track to Taylor and then sparred a catch to Lara in the slip cordon.

Harbhajan was the last man dismissed, in a similar fashion, and it gave Lara his fifth catch of the match.