Soon after Ashutosh Gowarikar's film, came Salman Rushdie's "short fiction" in the New Yorker, also coincidentally on Akbar's Jodha. 'Disgruntled' was how I felt when it was over... 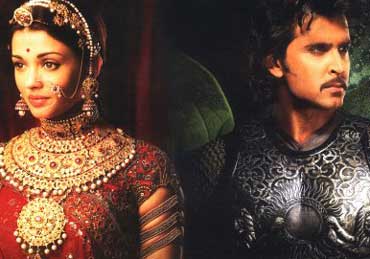 It is rare for a subject of Mumbai cinema and a magical realist writer’s imagination, to coincide, but such an astonishing simultaneity has actually come to pass: Salman Rushdie’s short fiction, "The Shelter of The World,” (New Yorker, Feb 25 2008) and Ashutosh Gowarikar’s film Jodha-Akbar (released February, 2008) came out around the same time. While the average Mumbai cinema aficionado is highly unlikely to have even heard of Rushdie despite his Satanic Verses disrepute, it is equally unlikely for the average New Yorker reader to have an appetite for Indian cinema, the popularity of Indian cuisine notwithstanding. Yet the improbable common audience does exist. It is an esoteric community of South Asian literature fans who communicate with one another through the reified channels of mailing lists, blogs and discussion-boards in the worldwide web. At this point, I must confess that I am one of them. In any case, Rushdie’s "short fiction" caught my eye as soon as I fished the New Yorker from my mailbox. I saved the story for my in between read time, but I must admit that I was tempted to read it all at once. To be as brief as possible, ‘disgruntled’ was how I felt when it was over. I was annoyed by the pulling together of the apocryphal, the reworking of old ideas -- even epithets -- and, frankly speaking, the unabashed cashing in of ‘cultural knowledge’ which is Rushdie’s forte.

“Shelter of the World” is a tale of Akbar’s enthrallment with an imagined wife, a Jodha of fantasy, a mirror image he had created. He wants to relate to her in a manner that was truly ‘himself’ that is an ‘I’ not a ‘We’. The royal ‘We’ represents a King and his subjects as one. Could a King be separate from his subjects and from his mirror image? That is the idea behind this story. But to get to the meat of the subject: the Jodha-Akbar chemistry -- the real or not so real, the allegorical or simply metaphorical nature of the relationship--and this is where the Mumbai film joins the discourse.

I knew of the Jodha-Akbar film through my son’s obsession with Mumbai cinema, and then an acquaintance raved about it after watching it on the big screen. So I made a mental note of renting the film whenever it became available. Up to that point I hadn’t read the Rushdie piece. I didn’t even know that there was such a piece of fiction. There are no theaters showing Indian films where I live. Under other circumstances, if someone had suggested that I traverse two hundred odd miles to go see a film in a theater I, would have rolled my eyes or smiled politely. Yet, now I found myself en route the two hundred mile trip to see the film after discussions warmed up in the esoteric circles I have alluded to above. Akbar's court: fragment from the Akbarnama

Allow me to dissect “The Shelter of the World” first because, to give due credit, it is a complex piece of writing, far more complicated than Jodha-Akbar, the Mumbai film. As a warm up, one has to cut through the Rushdian fondness for absurd wordplay:

And the penchant for pastiche such as: the Nine Jewels of Akabr’s court; anecdotes of Birbal’s wit; Akbar’s illiteracy, the unravelling of Jodha’s historicity-“she was not Prince Salim’s mother,” and so on.

To his own classic/stale/misplaced observations on displacement:

“Travel was pointless, it removed you from the place in which you had a meaning, and to which you gave meaning in return by dedicating your life to it, and spirited you away into fairylands where you were, and looked frankly absurd.” (p. 70)

The patient reader has to really wade through a lot of stuff to get to the heart of the piece, which is one of Rushdie’s favourite themes: the illustration of India’s plurality. The twist which creates the present story is a new facet: Akbar’s engagement with and understanding of India’s plurality.

He had been born into plurality. When he said “we” he naturally and truly meant himself as an incarnation of all his subjects, of all his cities and lands and rivers… […] Perhaps plurality was not exclusively a king’s prerogative[…] the men and women over whom he ruled[…] they too saw themselves as multiple […] they were all bags of selves, bursting with plurality, just as he was.” (p.66) But the critical issue or the “original question” that Rushdie asks for Akbar is: “If his many-selved subjects managed to think of themselves as the singular rather than the plural, could he too, be an “I”? Could there be an “I” that was simply oneself?”

Here Rushdie misses an opportunity to engage with the concept of the self within the Indo-Persian tradition. The “we” is also the “I” because it generally subsumes ourselves and our mental image which can be two different things, as they confront one another, and yet they both exist as one. The common trope in Indo-Persian poetry is the mirror, in which the reflection/image gazes back at the viewer, creating a state of mind described as hairat or “wonder.” There is also the idea that human beings are reflections themselves of another entity in an imaginal world. Thus the element of the “we” exists along with the “I” in all beings, whether kings or commoners, at the phenomenal level.

Had Rushdie’s intimacy with the Indo-Persian universe been deeper, he would have surely explored the idea of self at this point in the story. Instead, he goes off into a grammatical diversion, playing with the second person plural tum versus the second person singular tu. In other words, he indulges his favorite tactic of displaying his knowledge of Indic socio-linguistic culture, which may be exotic for the average New Yorker reader, but comes across as plainly banal for those of us who know better.

Thus the answer to the question “Could there be an ‘I’ that was simply oneself?” is both “yes” and “no.” But Rushdie’s answer is a categorical “no.” Akbar’s Jodha is a mirror of himself. “She was his mirror, because he had created her that way. But she was herself as well.” (p.70) She is the India of his dreams. When he tries to see himself as an entity separate from her, simply an “I” she changes from a perfect into a demonic lover, digging her long curved claw-like nails into the Emperor’s flesh. If he simply wished to possess her everything will change. Akbar learnt his lesson, the story concludes, “plural he would remain.” Now the film. The three hour, thirty minute ordeal of sitting in an uncomfortable seat breathing popcorn saturated air, here is what I got:

The film builds up a romance between Akbar and a Rajput princess who is accepted in marriage by the Mughal ruler. She may have had another name, but she is commonly remembered as Jodha. The princess helps Akbar acquire a better understanding or appreciation of the Indic culture (something he was predisposed towards anyway) which ultimately leads to his acceptance by his Hindu subjects as ‘one of us.’ The Akbar-Jodha courtship as depicted in the film does contain a faint resonance of Rushdie’s Jodha. The film’s Jodha is proud of her Rajput heritage, she is elusive, does not surrender to Akbar, but has to be won. In Rushdie’s words:

She was an impossibility, a fantasy of perfection. They [the other queens] feared her, knowing that, being impossible, she was irresistible, and that is why the King loved her best. (p. 69)

But though the film creates a fantastically perfect flesh and blood Jodha, it takes away from the power of her limitless beauty by placing her in opposition with not the other beauties of the harem who would naturally hate her for winning Akbar’s favour, but against the plain, old and scheming, Maham Anaga (Akbar’s wet nurse). The only other significant female character in the movie is the utterly unconvincing, verging on the ridiculous, persona of Hameeda Bano, Akbar’s Persian mother. One would have expected an astute director as Ashutosh Gowarikar to take full cinematic advantage of the delightful mysteries of the inner palace of the Mughals and weave the musical magic of Tansen’s singing to create a riveting romance like the one K. Asif conjured in Mughal-e Azam. While Rushdie cashes in on the Akbar-Birbal anecdotes, Gowarikar’s film skirts the “Nine Gems” altogether, even in scenes of the royal courts which could have benefited from some serious research on how to depict Mughal court culture. Both film and fiction engage with the plurality of Indian culture. The film fails because it tries too hard to please everyone. Deep down, it is a celebration of Hindu culture: its breadth and depth, its resilience, its glamour. What little we get to see of Mughal culture is the mostly semi-barbaric martial examples such as the chopping of heads of vanquished adversaries, the elephant taming episode, palace intrigues, etc. The film is not about the “glory of the Mughals” thankfully! We don’t need a reprise of the romanticized history. However, it is disturbing to realize that more than just a love story, the film is about Jodha’s Hindu identity cloaked in her femininity; that is, her identity as a woman who is figuring out her relationship with the Muslim man she is supposed to love is actually about a woman relying on religio-cultural difference as a wedge into the heart of the man. The present day Indian audience finds even a cursory reminder of Mughal past glories hard to swallow, even in fantasy.

Even so, the film tackles a delicate subject and opens the door to a historical past that has never really been looked directly in the eye. The Rushdie story affirms its author’s awareness of the literary-culture tradition of Indian literature. In the word play, the reworking and extending of ideas, images and metaphors, Salman Rushdie proves himself a worthy practitionar of the remarkably rich hybrid Indian literary tradition.