Father Of Civil Liberties In India

Till the very end, despite his failing health, which had confined him virtually to his house for the last year or so, he worked and wrote tirelessly for the causes that he held dear, particularly the cause of Civil Liberties. 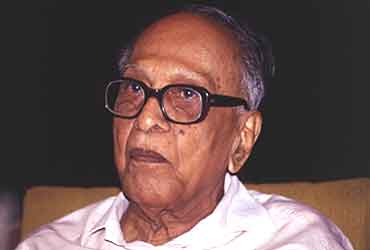 With the passing away of Mr Tarkunde, India has lost the father of the Civil Liberties movement in the country.  He died on March 21 after a brief illness at the ripe age of 94. Till the very end, despite his failing health, which had confined him virtually to his house for the last year or so, he worked and wrote tirelessly for the causes that he held dear, particularly the cause of Civil Liberties.

I first met Mr Tarkunde in 1976 during the Emergency, when Civil Liberties had been extinguished and the Habeas Corpus case was being heard by the Supreme Court, which would decide whether one could even approach the courts against illegal detention by the State, during the Emergency.

At a time when even four out of five judges of the Supreme Court succumbed and got intimidated into holding that fundamental rights and Civil Liberties got eclipsed during an Emergency, Mr Tarkunde with the blessings of JP founded the People's Union for Civil Liberties (PUCL). From then on, till he  died, he worked with exemplary courage, dedication and personal integrity, for the cause of Civil Liberties and human rights in the country, even when it was hazardous and not fashionable.

And, he fought relentlessly against every form of human rights abuse, not hesitating to say what he believed in, even if that offended some of his friends.  He was one of the first outsiders to speak on behalf of the Kashmiri people, saying that they had the right of plebiscite.

When the anti-Sikh riots shook the country after Mrs Gandhi's assassination, he led a team of lawyers to the very heart of places where the carnage was taking place, in an attempt to stop the carnage. He refused to be cowed down even when he was threatened with arrest and his book exposing the human rights abuses in Punjab had been banned.

What distressed him most however was the rise of communal fascism in India with the growth of the RSS/BJP and allied organisations of the Sangh Parivar.  He could clearly see what was coming with the demolition of the Babri Masjid. He told me at that very time that the BJP and the Sangh Parivar represented forces of fascism which would not tolerate Civil Liberties in this country.

He asked me to read Escape from Freedom by Erich Fromm which dealt with the psychological roots of fascism, in order to understand the psychology of members of the Sangh.  He was particularly disappointed with some of his erstwhile friends and colleagues from the Civil Liberties movement who had become the prominent intellectuals, rationalisers, and influential members of the government led by the Sangh Parivar.

It was difficult for him to get over the fact that he had once made Arun Shourie, a general secretary of the PUCL! Given his prescience and understanding of the methods and psychology of the Parivar, I'm sure that he foresaw the Gujarat carnage well before it took place. With the increasing stranglehold on power of the BJP and its allied organisations, the manner in which communalism was being spread with State support, and the manner in which POTA had been used, he was deeply worried about the future of Civil Liberties and democracy in this country, at the time of his death.

As a founder member of the Committee on Judicial Accountability, he actively worked for the cause of judicial accountability till the end.  He had also founded the Centre for Public Interest Litigation, to take up public interest litigation in a systematic manner with proper research.  Since I was looking after the Centre for several years, I recently wrote to him informing him of the recent activities of the Centre and seeking a small donation for the Centre.  He promptly sent a cheque of  Rs. 20,000, and said that though he had not been able to attend the meetings of the Centre because of his health recently, he was very happy with its activities.

I had decided to go and meet him immediately after I received this letter.  Unfortunately however, I kept putting off the meeting, not knowing that he was particularly unwell and in fact in the hospital, which I learnt about only when he passed away.

I will never be able to forgive myself for this procrastination. I hope that someday all the people in this country will realise the enormous debt that they owe to this one man.

A Question Of Arrogance