Contemporary spectator violence is the handiwork not of the lower-stalls, but of the privileged lot -- the educated elite, who with their painted faces and jingoistic instincts have taken over the cricket grounds, argues Boria Mazumdar 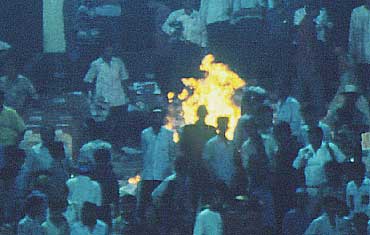 In view of a strange new development, thirst too seems to have become subservient to cricketing craze.

Be thirsty, if you have to watch the Eden Test, that seems to be the bottomline after the CAB officials and the Kolkata police announced their decision that taking bottles of water was forbidden to the Garden of Eden as these are potential weapons of violence with a possibility of ruining the game.

These officials cannot be blamed for their apprehension, for Eden has witnessed some bizarre scenes of late (I for one have no knowledge of a test match played for security personnel only, as the last Indo-Pak one at the Eden was).  But to suggest, as is being done, that this epidemic called 'violence' is another recent virus to have affected the 'gentleman's game is to perpetuate yet another myth, to say the least. While an increased violence is indeed a matter of grave concern, the diagnosis that democratisation of the sport leading to a plebeianisation of cricket spectatorship is its chief cause is grossly untrue.

Spectator violence in cricket dates back to 1776. In that year, in a match between Essex and Kent, the latter were accused of hiring a foreign player, triggering off a major crowd unrest. Both sides went to the extent of bringing out guns resulting in the killing of a police sergeant, and causing injury to many others.

Drawing a leaf from their British counterparts, violence in Indian cricket too is not a rootless phenomena as is often made out to be. Crowd violence and rioting in Indian cricket dates back to the late 1950s and early 1960s. In the 1964 series against the visiting English team, bottles, coconuts and debris were thrown in the ground in Mumbai throughout the match.

In Calcutta, in the same series, large hessian shades were set on fire The Test match at the Eden Gardens later that year, was interrupted four times as frenzied spectators had set fire to the overhead gunny covers. Such activities, contemporary newspapers reported, left the Eden Gardens looking like a shanty town. crowd violence in the 1990s has been stimulated mainly by the membership stands

Any cricket enthusiast commemorates the tragedy of January 1, 1967 with deep shame, when the West Indian players had to flee the ground for safety, when the crowd went wild in retaliation against alleged police oppression, and it was only at Frank Worrell's request that they agreed to let the Test match be completed. On this occasion, Conrad Hunte had to climb up the flag staff to prevent the West Indian flag from getting burnt and Gary Sobers had to run wildly around the maidan to save himself from the wrath of the violent mob.

In comparison however, the stampede of December 16, 1969 in search for tickets was even more tragic. It had left six dead and twenty two injured. While the 1967 riots are at least remembered with shame, the martyrs of 1969, who literally died for the game, have been lost to posterity. (Despite my utmost efforts I have been unable to find their names in any contemporary newspapers) The cause of the violence was an acute shortage of six-rupee daily tickets, once again testifying to the immense popularity of the sport more than three decades ago.

These instances were by no means unique to Calcutta. In Mumbai on November 8, 1969, after the umpire had declared Venkatraghvan out against the visiting Australians, frenzied spectators had thrown bottles on the ground. In Hyderabad in 1969 and in Mumbai again in 1975, instances of policemen beating up spectators led to widespread violence. A large numbers of spectators were injured, and in Mumbai an entire session of play was lost.

Instances of crowd violence, was also not completely unknown to domestic matches. The Ranji match between Mumbai and Baroda was abandoned when the crowd, raging against an umpiring verdict dug up the pitch.

Spectators hurled stones at the umpires, and Mumbai wicket-keeper Kiran Asher was injured in the eye. This outbreak denied Mumbai a chance to chase a meagre target of 168 runs for a semi-final berth. While these instances are indeed comparable to the recent instances of crowd unrest in Kolkata (the 1996 world cup semi-final between India and Sri Lanka and the Asian Test championship match between India and Pakistan) they have faded away from popular memory and are now the part of the dusty shelves of newspaper archives. This is primarily because of the lack of extensive media coverage prior to 1983. As a result, news was confined to small locales. In stark contrast nowadays, the influx of satellite channels and the featuring of cricket news as first page newspaper leads have made even the disinterested audience aware of what is happening on the cricket field.

Are there any notable differences in the nature of spectator violence across time? Even a cursory glance reveals a host of dissimilarities. While earlier instances were fuelled mainly by the cheaper stands infested by the ordinary spectator, crowd violence in the 1990s have been stimulated mainly by the membership stands. This is especially applicable to Kolkata. If we recount the two earlier instances of unrest, we have to accept that the outbursts were triggered by the hurling of Coke and Pepsi bottles from the membership stands.

Infact, in the first instance, i.e. in the world cup match, when sanity seemed to have been restored and the game was about to resume, another spurt of bottle throwing from the life-membership block forced match referee Clive Lloyd to declare the match abandoned and the Lankans victors by default.

The point to note here is the change in the instruments of violence.  Earlier, orange and banana peels together with glass bottles used to cause the problems. Now, empty plastic soft drink bottles have taken over. These are sold by the sponsors inside the ground at Rs 50 a bottle. It goes without saying that a plebeian cannot afford to spend 150-200 rupees a day on soft drinks, clearly a superfluous habit when one operates on a shoe string budget.

The point is that we have wilfully allowed the reality of the situation to escape our attention. Contemporary spectator violence is the handiwork of the privileged lot, the educated elite, who with their painted faces and jingoistic instincts have taken over the cricket grounds.

The critical question which now confronts us is 'why does this educated elite take to hooliganism?' After having spent Rs 300-400 on a ticket, or Rs 12000 on a membership, alongside the amounts on soft drinks, this crowd wants their money's worth in the form of a national victory and nothing else is acceptable to them. Further, cricket matches in India are the only arena for a demonstration of national prowess and pride. It creates a 'spectacle' which makes us aware of our oft-forgotten Indian identity. The perception of being citizens of a developing country which fails to make its presence felt internationally, either in sport or diplomacy, leads a large bulk of the educated mass to flex their muscles in the cricket field, their only available respite.

It cannot simply be explained by suggesting that violence is a product of the democratisation of the game and the plebeianisation of the crowd. In the 1960s and 70s, in all international and domestic matches, the crowd was divided into small compartments separated by ropes. These enclaves were led by the unemployed, yet talented dadas of various localities -- elements who did not have the money for country liquor, leave alone Coke and Pepsi. They, no longer have access to cricket stadiums today, as their domination has been usurped by the moneyed college going "educated",  jingoistic youth. Accordingly, the answer to the question as to how violence can be effectively stopped eludes us.

Stopping people from taking water bottles may in turn increase violence by stopping the plebeian spectator from visiting Eden, knowing his inability to purchase Coke and Pepsi to quench his thirst. His place will be gladly usurped by the moneyed elite, people who cannot, and will not be stopped by the police from purchasing soft drinks. So violence may well be on the cards, if the direction of the cops' wrath towards the plebeian is not changed soon.

With another chicken-hearted performance from the home team this potential has magnified significantly at the end of the second day's play. People in their post-match rides home reflected on the 400-500 rupees wasted, reflections which became violent at the smallest controversy. Traffic rules were violated with elan to show off  their strength against helpless cops who could just look on. With the cops trying to control the huge and depressed masses, the grievance against water is already on the upswing, a factor checked by Harbhajan's hattrick on the first day, and plans to overcome checks against carrying bottles are well underway.

Having interviewed a series of spectators from the membership blocks on their way home I was amazed at the intricacies of their plans. They have decided to get food from the best known restaurants of  Kolkata in aluminium foils, food the police will allow into the ground without questioning. With a layer of food on top, the second layer at the bottom, the conversations revealed may well be stuffed with inflammatory crackers. Having spent 500 already, another 500 won't do them much harm these men consistently reiterated. What if some costly food is wasted? It will enable them to teach the cops a lesson, seems to be the underlying sentiment. No wonder Jagmohan Dalmiya while visiting the press box in the second afternoon, anxiously asked after Saurav's tame dismissal, " Mathe botlle ba bom porlo na to?" (There weren't any bottles or bombs thrwon on the field, I hope?)"

Despite being relieved so far, another top level security meeting may well be on the cards, given the volatile Kolkata crowd.