The legal team of actor Shah Rukh Khan’s son Aryan Khan were seen getting clicked together with the superstar after the actor’s son was granted bail by the Bombay High Court in the ongoing drugs-bust case. 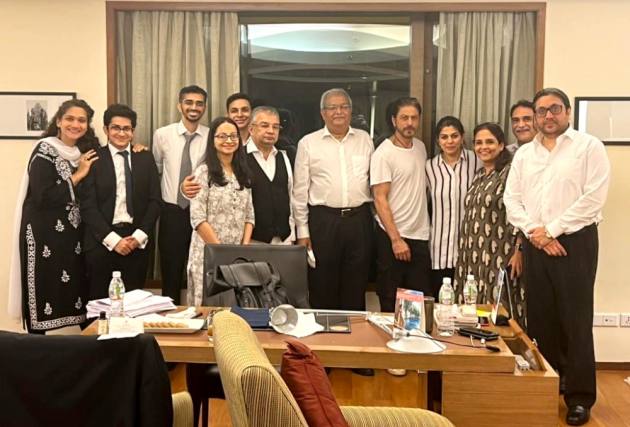 Actor Shah Rukh Khan’s son Aryan Khan was finally granted bail by the Bombay High Court earlier today. The star kid spent more than three weeks in the custody, and it will still be a day or two before he can be back to his home. The legal team of Aryan Khan was seen celebrating this victory in their own little way.

Pictures of senior advocate Amit Desai, advocate Satish Maneshinde and the legal team of Aryan Khan was seen posing with Shah Rukh Khan. The pictures have gone viral on social media now. Have a look at them here:

For the unversed, Aryan Khan was arrested during a cruise ship drugs bust by the Narcotics Control Bureau (NCB) on October 2.

Satish Maneshinde in a statement to the media after the bail grant said on behalf of his team, "Aryan Shah Rukh Khan has ultimately been released on bail by the HC. No possession, no evidence, no consumption, no conspiracy, right from the first moment when he was detained on 2nd Oct 2021… Nor is there anything as of now. We are grateful to Almighty that our prayers were accepted by Mr Justice Nitin Sambre and granted bail to Aryan. Satya Meva Jayate."

The verdict has been welcomed by SRK’s fans and also many friends of the family from the entertainment industry. Many celebs have taken to social media to thank the court and applaud the bail judgement. While fans who had gathered outside Shah Rukh Khan's residence in Bandra, Mannat, to show their support, celebrated the verdict today by hoisting banners and bursting firecrackers.