Saying It With Music

Two contrasting shows, each reaching out with strong messages wrapped in hope! 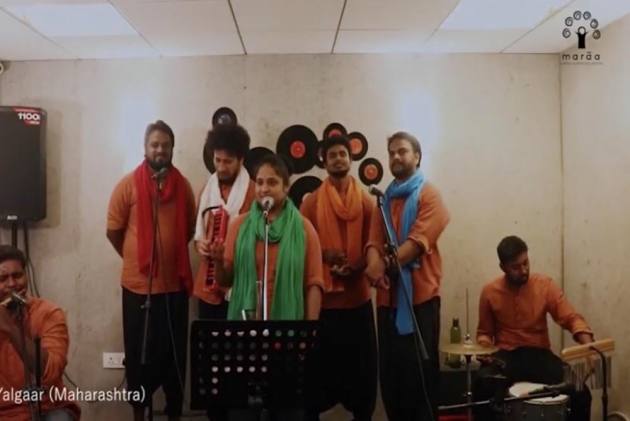 As part of its online shows, the Royal Opera House recently held a selected retrospective of Geetu Hinduja’s work that celebrated life.

Geeta Hinduja, a folk-singer who has trained in classical music, wears many looks, each suited to the shape of her song. Her compositions in the selection ranged from a windswept video shot by the gentle sea where she sings “I’ll never be defeated” to happy collaborations celebrating sisterhoods day serious classical compositions tuned to the words of Adi Shankaracharya and Avalokiteswara.

With practised dexterity, Hinduja turns her voice to suit the tunes, keeping it light and lilting in the sisterhood numbers and using the deeper registers for the slogans and hymns. The settings too match, as do her many looks, from free-flowing robe-like tunics to saris in heavy silk.

As important is the infectious quality of her passion for music, which prompted her to give up her pursuit of art and her art gallery to be a full-time musician-singer. The song of sisterhood had her collaborating with Kelli Eagan from Boston and Alisha Pais from Mumbai to write the song for a few performances held in Mumbai. The new shape of the song, as seen in the video was a natural progression with seven women joining in to create the audio-video version for online transmission. It is a rousing, happy, hope-filled song ideal to lift the spirits in these times. And you can listen to it as well as the other, equally stirring compositions in Sanskrit and Oriya, in which language she sings a devotional number. Do tune in for an aural treat. Melodious, soothing and uplifting.

Protest has many voices, many languages

Very different in tone, voice and spirit was the show that went live on November 21 “in solidarity with political prisoners, the missing and the dead” and those persecuted on the basis of caste, religion. Organised by Maraa (meaning many things, including death, tree, river, depending on the language of the reader of the word) the media and arts collective’s show was titled IDEAS WILL NOT BE ARRESTED.

The show also highlighted the plight of performing artistes robbed of avenues and audiences due to the pandemic and appealed for help from the audience, as all ticket money would go directly to the artistes.

In the traditional way of all artistic protests, the show combined song and skit, rap and powerful lyrics blending with melodious tunes to take the message forward. Performers included Chhattisgarh’s Kakadas Dehariya of the RELAA protest music collective, whose poem about mitti could not but move any listener. As he recited his words, “Main mitti hon,mujhse sabh hai, sabhse main nahin/Loha bada itrata hai, use pasta nahin ki mere garb se he paid a hula hai./Sona, Heera....bhi...”

The plaint of mitti went on to say how it envelops rubbish and gives shelter to corpses, but is also the base material that helps men fashion gods in his own image. That without mitti, there would be no river or mountain or canal....Thus making a powerful environmental appeal to stop the plunder of nature, the deforestation in the name of progress. Simple instruments like the dholak added their poignant tones to the message.

Wanadaf of Bangalore, represented by two rappers who admitted their discomfort with conversational Hindi but rapped in powerful words in the same language, said they owed their vocabulary for the songs to Bollywood, and preferred rapping in Hindi as it would reach out to those who needed to hear the message.

Yalgaar from Maharashtra added their voice with singing and an entire folk orchestra with a very melodious flautist weaving pathos through the entire song. Dedicated to Savitribai Phule, crusader for women’s equality, the song highlighted the need to educate girl children and let them realise their potential. Police atrocities in all parts of the world were decried next with guitar and voice raised robustly against those who use their uniform and lathis to commit atrocities, covering moments in history from Jallianwala Bagh to attacks on minorities all over the world, including India. A skit that had a dialogue between two -- me, one a labourer and the other wearing a saffron shawl, ended with the labourer who “only wanted to go home to his family to escape hunger” being advised to find release and salvation by “sleeping on the tracks”.

Narayanaswamy of Karnataka sang in Kannada in the style of the wandering minstrels with free and impassioned voice, beating time on his one-stringed instrument. A streamer with a translation would have reached out to many more, but his appeal was compassion for all those pushed into the fringe by the pandemic, and against atrocities against protesters. Listening to him, as he sat cross-legged in a coat and shirt, singing the close-to-the-ground music one could not but be drawn into the mood of his song, even if the words were not comprehensible. Such is the power of music from the heart.

All told, the 90-minute packed powerful stuff, to awaken many a conscience slumbering in the grip of Covid-induced inertia. Will you take up the challenge and listen?