The film revolves around the old topic of caste-based oppression but the splendid vision of the director proves Karnan is a film that is going to stay for a long time with the audience. 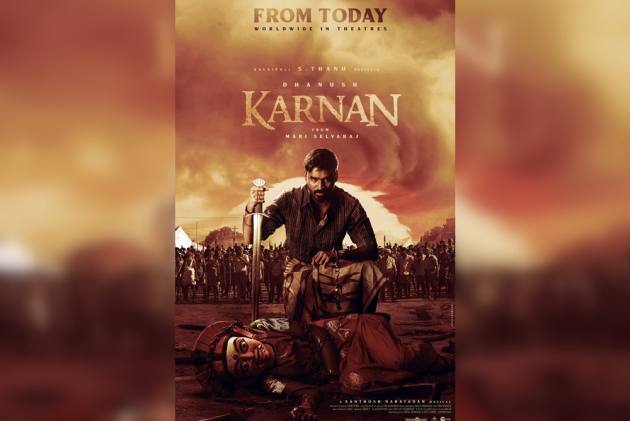 Karnan is a motion of defiance against oppression and gives one a cinematic experience of a lifetime. After making a remarkable directorial debut with Pariyerum Perumal, Mari Selvaraj drops another brilliant masterpiece to the Tamil film industry. The film revolves around the old topic of caste-based oppression but the splendid vision of the director coupled with authentic performances by the entire cast proves Karnan is a film that is going to stay for a long time with the audience. With a running time of 159 minutes, the film captures attention from the very beginning with its daunting depiction of hollowness in death even when viewed in the public. It takes no time to transfer its audience to a space of deep anxiety and makes one inconceivably attached to move ahead with the storyline. The film captures the trauma and humiliation faced by the villagers in the remotest village of Tamil Nadu in its most authentic demeanour. The execution of every single frame and shot has been done with undisputed perfection and is a treat to the eyes.

The story revolves around a secluded village in Tamil Nadu where its members faced routine humiliation and difficulties due to the non-availability of a bus stop in their village. As the story unfolds it explores issues of caste distinction, internal conflicts, jealousy, illiteracy, poverty and the struggle of the villagers to gain recognition and police brutality.  It deals with the raw anxiety suffered by the villagers when cornered and dehumanised by an agent of the state and their violent outpour as a consequent result. Karnan, played by Dhanush, is a fearless young man from a remote village in Tamil Nadu, who consistently raised his voice to counter the injustices faced by his people. The film portrays the internalised caste humiliation by members of the village who think that their positioning in the society is given and the only way to survive is to be in peace with the society and the system at large. Karnan consistently raised his voice against this normalisation of humiliation and most often than not silenced by other members of the village. The final battle showcases, on one hand we see the generational oppression faced by the villagers and their fight against the system as a last resort to make their voices heard and on the other hand, the collaboration of power, state instrument and society who works in consonance to suppress those voices.

The vision of Mari Selvaraj, writer and director of the film, has provided the audience with a cinematic exposure that is both visually and emotionally loaded and goes beyond the bracketed categorisation of an action-thriller. The continuous rift between the two villages depicts the real nature of caste oppression in India where the presence of the oppressed is crucial for the survival of the oppressor. The capturing of details- the symbolic grab of the eagle, the fish hook, the portrayal of the donkey and the desire of the young boy to raise a horse as a pet- and its culmination manifesting the everyday humiliation faced by the people in the village is a work of pure brilliance. The film forces its audience to think about the persistent violence that has been normalised in our everyday lives. The aspect of the otherworldly spiritual transcendence has also been depicted well in the film by the periodic reoccurrence of the lead’s younger sister who died at an early age.

The scenes are daunting and impactful that leaves one in deep thought and anxiety even after the film gets over. The film is a cinematic masterpiece and director Mari Selvaraj deserves a standing ovation for its execution. The usage of every element in the movie has a purpose be it the animals, the sword, or the wall painting. It depicts the generational injustices suffered by the villagers and is in sync with the existing caste-based inequalities in the Indian society. Some of the scenes ignite uncomfortable emotions of anger and exhaustion in the mind. The entire film is loaded with surreal symbolism through which it portrays the struggle of the members of the lower caste to climb the social ladder. In the beginning of the movie, one can see a donkey with its front legs tied as the owner fears of its escape. Throughout the movie, the metaphor of the donkey has been beautifully used to reflect the suppressed and restricted movement of the villagers and a blatant refusal of the system to make space for the villagers as well. Towards the end of the movie, Karnan riding the horse can be viewed as the oppressed finally making its way to break the chains of its oppression. The starring goddess makes a daunting connection between the spiritual and the psychological and enthralled the audience to keep looking for more.

The 159 minutes marks a magnificent cinematic experience and bestows us with questions of deep-rooted caste-based discrimination in society. The Tamil film industry has time and again given us gems that deal with topics of social issues and this has been another masterpiece added to the list. The entire cast has done a splendid job in portraying their character with complete honesty including the child actors. The capturing of raw emotions and an authentic village set-up made the storyline more real and the experience psychedelic. The writer has brilliantly used the names of the characters to appropriate the reference of their mythical significance and to highlight the politics of hypocrisy following the same in a real-life setting. Dhanush like always has surpassed the expectations and has done a mind-blowing job in portraying Karnan. After bagging a national award last year, he is definitely rooting for another with this venture. The movie exposes the hidden disciplining of the body and mind of the villagers and the process of normalising their oppression and the subsequent struggle of the same to break away from such disciplining act.

Overall the movie brings to light the age-old uncomfortable topic of caste-based discrimination existing over generations. The consistent fight for recognition and conditions to empower the self stands in direct contradiction of the failure of the state and the society to provide for inclusion and their blatant refusal to share a common space has been portrayed with utmost sincerity. The vision in this film moves beyond conventional mediums of reforms and participation and resort to violent means which can appear problematic for some but this movie comes at a critical juncture of time when the question of Dalit entitlement is securing central attention and is a definite must-watch for those who want to experience a masterpiece in its truest sense.