If Comedy Offends Somebody, Do More Comedy: Vir Das 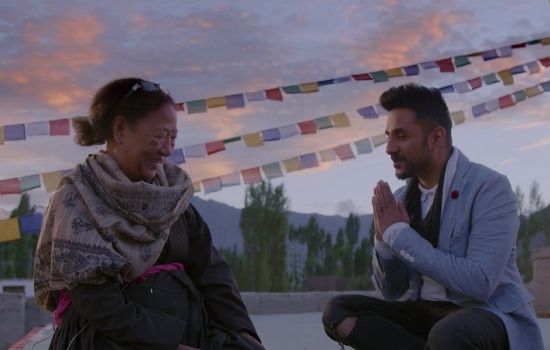 Vir Das, who earned international fame for his stand-up comedy is back to doing what he does best. But this time around, he has mixed it up with travel to offer a delectable fare called Jestination Unknown, based on his funny experiences through his journeys, which he undertook to six cities across the country – Lucknow, Mysore, Jodhpur, Patiala, Leh, and Kumarakom -- with a gang of fellow comedians such as Suresh Menon, Shruti Seth, Anu Menon, Ashwin Mushran and a few others. In conversation with Giridhar Jha, Das says that his latest show streaming on Amazon Prime Video now is a totally unscripted, out-of-the-box attempt to gauge the humour quotient of people in different Indian cities.  Excerpts from the interview:

You have been doing different things for different shows over the years. What’s the USP of Jestination Unknown, you latest, which has started streaming on Amazon Prime Video?

It is a travel-meets-comedy show. I had been thinking of doing a travel show for a very long time. But I always wanted to travel with the comedians because I feel our minds are somewhat warped and we see similar things. It is a kind of show that combines travel, sketch, documentary and a little bit of stand-up comedy as well. We decided to go to a city, meet locals, find out what they find funny, experience the place, shoot sketches, find a venue do a show, write some local jokes and so forth. In that sense, it is a mix of different genres, which I don’t think have been mixed before.

Also, its biggest selling point is that its script is totally unscripted. Unlike other comedy shows, which are very polished and edited, it is all raw. It is reality television in a sense and that makes it very watchable and engaging.

You have chosen to travel to six cities in different parts of the country for the first season? Did you find all of them to be the same or different on fun and humour quotient?

They are all very different and funny for very different reasons. In Punjab, they are very funny and the people there will take a joke on themselves. Kerala is the land of very educated people, so they like very different kinds of jokes. In Ladakh, the terrain is very rough so you have to mostly do story-telling types of humour. In Lucknow, it is all about Urdu sher-o-shayari and hasya kavi sammelans. It changes from place to place.

And how funny did you find the country as a whole?

India as a nation is very funny. We have got a wonderful sense of humour and a wonderful audience. I really believe that.

India has traditionally been known to be a funny country with the ability of its people to even laugh at themselves. But in recent times, people seem to have become thin-skinned and even take an exception to humorous comments, even the ones made without malice.

I don’t think so. If you come to my live shows, you will see left-wingers, right-wingers, college kids, middle-aged people, older people, uncles, their sons and daughters, all kinds of people from different sections of society. You will see girls in mini skirts and salwar-kameezes also. They are all there ready to laugh. I always think that if a joke does not work, just do more jokes. If I am doing 200 jokes on a show, plenty of them may not work. Maybe 20 of them might upset you. But if the rest clicks, then I am okay with that.

In recent times, some comedians have landed in trouble for making seemingly innocuous remarks on their shows, which offended somebody somewhere.

You cannot control what people will take an offence at. India is like a very big joint family eating on a big plate which has a variety of dishes. Somebody, maybe an uncle, may not like bhindi and you cannot do anything about it. You cannot control him. If people get offended, the answer is to do more comedy.

As a stand-up comedian, do you have to politically correct these days so as to not tread on the shoes of such people? Or, you have managed to remain as irreverent as ever?

No. I crack a joke and if it is not a good one, the audience will tell me immediately. More than anything else I trust the judgement of the audience. They will tell where have you gone far.

You are widely considered to be a pioneer in stand-up comedy. At least it became a trend with your arrival on the scene.

It is incorrect that I have pioneered this trend. In India, Hindi stand-up comedy had been happening way before I came. There were people like Surender Sharma, Jaspal Bhatti and Johny Lever. In English stand-up comedy, there were Bharat Dabholkar, Boman Irani, Ash Chandler, Papa CJ, all these people have been doing even before I came.

You have been doing it for the past 11 years or so. What changes did you notice in the stand-up comedy scene in Indian since then?

I think I had to earn my fans the hard way at the start through live shows only. Now, you have YouTube, Facebook, Twitter, Amazon Prime Video, Netflix. There are so many avenues at your disposal where you can put out your content for the entire world to see. In fact, it is getting better by the day. I am excited to be a comedian in the digital age today.

The advent of over-the-top platforms such as Netflix and Amazon Prime Video has made its reach truly phenomenal. Isn’t it?

True, but every Friday you will still find me in a theatre doing my shows. If I have a film on Friday, then you will find me doing it on Saturday. I will keep doing that. That will not go anywhere.

Do you think the content has to be universal in the OTT platforms given its global viewership?

Ours is an Indian show in that sense. I feel if somebody is interested in Indian culture, they will definitely come to watch.

What are your views on conventional comedy which has been part of Hindi cinema over the years? Many consider them to be generally over the top or blamed them for perpetuating many stereotypes.

I have been part of over-the-top comedies and also done stand-up and other types of comedies. There is an audience for everything in this country of more than a billion people. I don’t think over-the-top or slapstick comedies are bad. They are, in fact, very tough to do. If you ask somebody from a comedy club to do a Priyadarshan film, he may not be able to do it. I think what Johnny Lever or Anupam Kher does is an art form. I respect them and want to try all types of comedy.

But the roles for the traditional comedians are limited now?

It would be hypocritical, ungrateful and ungraceful of me to claim that comedians have been restricted in any way given the number of opportunities I have received as a comedian. The world of opportunities has opened to me that would not have had it not been there.

But there was a time when ‘comic relief’ was considered to be an integral part of mainstream Hindi cinema. That seems to be missing in the new-age cinema now.

I don’t think so. Look at Stree (2018) or Hindi Medium (2017). Actually, it is a very good time to be a comedian. Of course, the fixed slots which were there for a comedian, a villain and so forth have changed. That line between characters has blurred.

What next after Jestination Unknown?

I will be going away on a world tour with my next stand-up show followed by a fiction series. Plus, I also have a Bollywood film.

You are a multi-tasker doing a variety of things at the same time. How do you juggle your different, demanding roles?

I have ideas and touch wood, I have a very good team, which executes them. I am at a point where I can give my idea to my team. All I have to worry about is the craft.