No longer are the items numbers just about the sexy actress dancing with lots of men objectifying her and a crassly written song. Here’s looking at the change in them over the years. 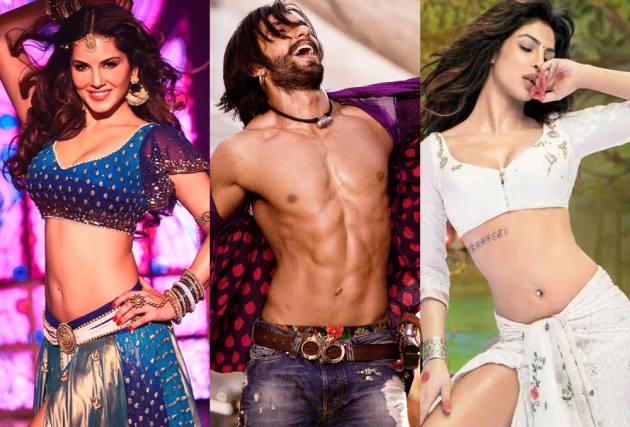 You’re watching a movie. Suddenly on the screens, the lights go off, the music starts thumping, and you can pretty much feel the intoxication seeping into the air. The hero and heroine vanish and centre stage takes a female actor with an hourglass figure or their male counterpart, who is shirtless and flaunting his bulging muscles and six-pack abs. It’s as if these people walked out of your dreams and once you’re done watching it, you’ll have to invariably wake up the dull hero and heroine with their regular boy-meets-girl, dishum dishum and I love you-laden story.

So, it’s this item song that provides you with a means of escapism from the already escapist movie that you’re watching.

What Exactly Is This Item Number?

It’s sort of a promotional music video for the movie. Sort of a sexist exemplification of women subjected to the male gaze or the chiselled male subjected to a jarring hoot by all the ladies in the house. Or well, in today’s open society, it could be the other way around, depending on your sexual preference.

But overall, item song is the objectification of the human form for utter visual entertainment. In most cases, it’s a heightened reality which no one can have. Just as Sheila says, “I know you want it, but you’re never gonna get it.”

Where Did It Begin?

Well, it was pretty much always there. Just that it has kept changing its ways with the changing society. In the movies of the 1950s-60s, it used to be a dance video in the middle of the movie where a girl, who’s not the heroine, just grabs the limelight for a five-minute sequence where she breaks out into a solo performance just to satisfy the male gaze. However, that has slowly and steadily in the 2000s turned into a fully grown profession.

Ever since the 1940s till the late 1990s, the item song used to be predominantly the women. From Cuckoo Moray to Helen to Aruna Irani to Neena Gupta to even leading ladies like Vyjayanthimala, Zeenat Aman, Parveen Babi, Madhuri Dixit and many others have been the centrepiece for such break-out dance numbers. However, the term ‘item numbers’ or ‘item songs’ hadn’t luckily been coined till then. That meant that the songs got a dignified stance in the scheme of things.

Make no mistake; the items songs have had a transformation in themselves in this new millennium. From being just the solo dance number which could be enjoyed by even sitting with your parents (considering the music and lyrics of these songs were that good) these slowly shifted towards just being crass lyrics with one punch line and a semi-naked female actor trying to raise your testosterone levels. From Mallika Sherawat to Aishwarya Rai to Yana Gupta to Bipasha Basu to Amrita Arora to Priyanka Chopra to Rakhi Sawant to Malaika Arora to Katrina Kaif to Gauahar Khan to Deepika Padukone to Sunny Leone to Jacqueline Fernandez to Nora Fatehi – everyone has done it at some point or the other. To add to these sexily clad women would be the gross lyrics of some of these songs which, at times, make it very difficult to listen to them if you are in a family gathering, and the song just simply pops up on the telly while browsing channels.

Is It Still All Sleaze?

Partly, Yes! But definitely, there has been a plethora of changes to this genre in the past decade.

One of the prime examples of this change is the equal weightage of both men and women in doing item numbers. While previously it was just the female actors, now it has even superstars like Akshay Kumar, Shah Rukh Khan, Aamir Khan, Amitabh Bachchan, Ranveer Singh and many others coming in to do a one-off item song, and that has resulted in it becoming more of a promotional track rather than being centred all on sleaze.

It’s not that the sleazy ones have stopped getting made. They’re still very much in demand, and audiences still just lap up to them. But their numbers have reduced considerably. While previously we used to see 10-12 massively popular sleazy item songs throughout the year, now we probably see two of them getting that immense popularity. Thereby, it has led to filmmakers slowly moving away from it.

To be fair, the shoot of the items songs are lavish and involves a huge cost. At times, just one song shoot can cost about Rs 3-4 crores, and if the return on the investment isn’t that high, the producers definitely will think twice before making another one for their next project. The more we see the audiences move away from such objectifying songs, the lesser they get made, and the world becomes a slightly better place to live.