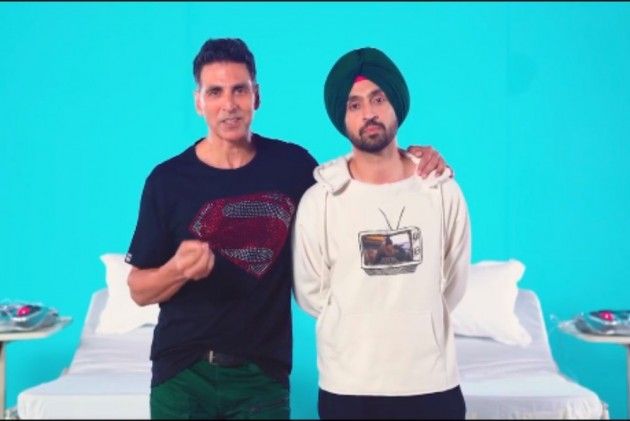 Diljit Dosanjh plays a loud Punjabi man in Good Newwz which released just two-three days ago. The actor is ecstatic about sharing screen space with Akshay Kumar, Kiara Advani and Kareena Kapoor Khan in the comedy flick, which has been produced by Karan Johar, Akshay Kumar among others. The film has opened to a good weekend business. In an exclusive chat with Pinkvilla, we asked Diljit what makes him choose a script, working with Akshay and what did he learn from him.

A small step to understand what mothers go through by @diljitdosanjh & me. Dil se - RESPECT to all the mummies out there, delivering #GoodNewwz is harder than anyone can imagine!♥ï¸ @dharmamovies

About what makes him choose the script, Diljit said, "When I had heard about this film, I was certain I want to do it. I laughed the most when I heard the script. It was such a fun character.
That day itself I got a call from Karan Sir and I said I am on for the film." He went to explain that the best part of working on the project is that he got to learn so much from his co-actors.
"Akshay sir's comedy timing is very good, especially after 2012-13, he is choosing different subjects and it is very inspiring. Akshay sir is very good at comedy. He has so much energy in him. He not only expresses with his dialogues but also his body. He is like Mr Bean. It is very difficult to pull this off and Akshay sir can do it extremely well."

Further, he added, "This film is about IVF (In vitro fertilisation), even I did not about IVF before I signed the movie. I googled it. When the trailer came out, many friends of mine told me thatthey had a baby via IVF and I was stunned because I never knew about it. So, I am glad that there will be a certain level of awareness because of this."

Lastly, we asked him about the video Akshay and he shot for where they went through pain to experience what women go through during labour. We asked him if hurt him as much as it did Akshay, and Diljit laughed, "They have cut a lot of parts where I have abused a lot because I couldn't just take it. I got to know that women have so much resistance and power, a man can't do this. Akshay Sir ki hala kharab ho gayi, imagine. He is so fit."