The result of the deepening and subsequent fragmentation of Mandal has been the formation of two rival power centers in Bihar — an upper caste center and an upper OBC center. 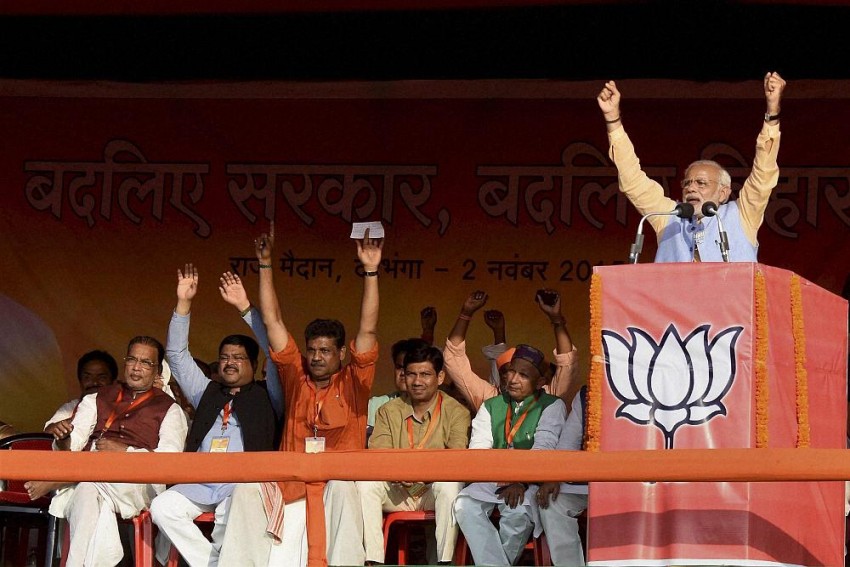 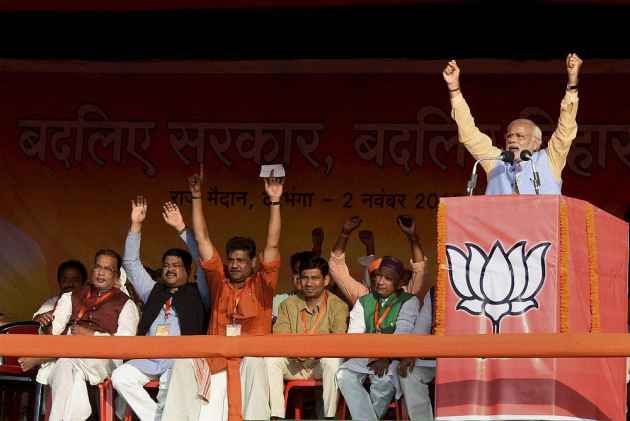 While scattered, 30 per cent of the Extremely Backward Castes will be decisive, the emergence of Narendra Modi has profoundly influenced the political landscape in Bihar. In 2014 upper castes and a majority of the OBCs voted for the BJP. If this trend is repeated in the assembly election, would it mean that the politics of Mandal is over?

The assembly election in Bihar was shaped by the collision of two very different political movements, one national and one regional. The first is the rise of the BJP under the leadership of Narendra Modi and the second is the politicisation of "lower backwards" and Mahadalits in Bihar. The intersection of these two trends is profoundly reshaping Bihar's political landscape, and perhaps India's. Let's start with the "Modi wave" and what it means for Bihar.

Bihar is being seen as a litmus test for whether the BJP's can consolidate the gains it made in the 2014 lok sabha elections, especially since losing the Delhi elections earlier this year. The BJP needs to win Bihar in order to keep its momentum alive. And to eventually gain control of the Rajya Sabha in order to push through new legislation. But Bihar is witnessing India's new national politics clash with regional realities, a test of whether the BJP can create the kind of pan-India dominance that the Congress once enjoyed, and whether this is even possible in post-Mandal era of regional parties and leaders.

It is instructive to consider how many recent developments would have been difficult to even imagine a few years ago. Until 2014, the BJP in Bihar had long been viewed as a predominantly upper caste, urban-centric party. Since Bihar is largely rural and has a politicized lower caste majority, the BJP remained a relatively marginal party. Hindutva had never been a real factor in state politics except as an outside force (to consolidate Muslims). The politics of Mandal insulated Bihar from the politics of Kamandal. The "Modi wave" has, in a remarkably short period of time, transformed the BJP from a junior coalition partner — a role it played from 1996 — into a dominant political force in the state.

The most dramatic impact of this development has been the formation of the "Grand Alliance" of the JD(U), RJD and Congress. Considering that for twenty years the central political rivalry in Bihar has been between Lalu Yadav and Nitish Kumar (and before this between the Janata and the Congress), their coming together reflects how profoundly the Modi wave has shaken up political dynamics in Bihar.

As part of this rapidly shifting political landscape, two Dalit parties, Ram Vilas Paswan's LJP and Jitan Ram Manjhi's HAM have joined the NDA. While Paswan has previously been in the NDA, he left in the wake of the Gujarat riots. Furthermore, Paswan's earlier efforts to forge a Dalit-Muslim coalition compelled him to refuse joining hands with the BJP in 2005 after a fractured mandate in an alliance that would have made him chief minister. Returning to the NDA under Modi's leadership reflects a profound rethinking of the LJP's political positioning in the wake of an ascendant BJP.

Manjhi was installed as chief minister by Nitish Kumar in the wake of the 2014 BJP sweep as a potential revolt by upper caste party members threatened to split the JD(U). Coming from the Musahars — the poorest, most marginalized caste in Bihar — Nitish rightly calculated that no one would be able to openly oppose Manjhi. Since the Musahar's enjoyed little political power and Manjhi had never had a large profile, it was assumed that Manjhi would be a loyal proxy. But Manjhi utilized Bihar's shifting political landscape in order to aggressively pursue a Dalit agenda, compelling Nitish to dislodge him as CM. An independent, outspoken Musahar leader with the tactical willingness to shift sides is a very new development in Bihar and reflects the process of caste-based politicization that is currently playing out.

Perhaps the most surprising development has been an unprecedented upper caste consolidation behind the BJP, without the kind of "backward caste" backlash that Bihar's political history would lead us to predict. According to the CSDS post-poll survey for the 2014 Lok Sabha elections, 78 percent of upper castes voted for the BJP, the strongest upper caste consolidation that these surveys has yet captured. But this happened at the same time as the BJP won a majority of OBC votes and even Dalit votes (in alliance with Ram Vilas Paswan). Given the long history of backward caste politics — going back at least to the backward caste movement of the 1960s — how has this been possible? Does this mean that the politics of Mandal is over?

The muted reaction to the BJP's upper caste consolidation reflects both the success of Mandal in shifting political power in Bihar — creating a rival center of OBC power — and a progressive fragmentation of the lower OBC vote as a result of a deepening of lower caste political empowerment.

The sociological factor underlying this fragmentation is the ubiquitous importance of caste networks. For getting a government job, access to credit, accessing development resources, dealing with criminal groups, and even to successfully migrate (as economists have shown) — caste networks matter. The key point is that these networks operate at the level of individual castes and are built around caste leader politicians. There is no OBC network, there is a Yadav and a Kurmi network. There is no Dalit network — but there is a Paswan and a Chamar network. There is no EBC network — but there is a Kanu and a Teli network.

As the process of lower caste empowerment has moved "downwards," from the upper castes to the upper backwards and now to lower backwards and Dalits, it is inevitable that historically marginalised castes will not be content to be part of an alliance that does not generate influential leaders from their specific caste and the networks that come with that.

The progressive impacts of reservations have made this shift more pronounced. Although precise data on this is unavailable, the Bihar bureaucracy is becoming increasingly backward caste as public employment has expanded over the last decade. OBC reservations in Bihar favors Annexure One castes (Extremely Backward Castes) over Annexure Two (upper backwards) — a legacy of Karpoori Thakur who was himself an EBC and the Mungeri Lal Commission which resulting in reserving 20% of positions for EBCs. This has resulted in an expanding class of EBC bureaucrats. As with OBC reservations more generally, well positioned castes such as Kanus have benefited the most, generating demands for greater political representation.

One of the first things that Nitish Kumar did as chief minister in 2006 was to match the EBC reservations in the state bureaucracy with 20% reservations in panchayat institutions, including the key post of mukhiya. This has produced a class of village-level EBC political leaders, who now have to be taken into consideration during the campaign. The result of this has been a caste-by-caste completion for EBC votes and the loyalty of EBC leaders. The battle for Bihar will be determined by which alliance proves to be the most successful in attracting these leaders and their supporters. Geographically scattered EBCs are often reluctant to openly state voting intentions, making predicting the election especially difficult and perhaps explaining the often-wild inconsistencies of pre-poll survey predictions.

The result of the deepening and subsequent fragmentation of Mandal has been the formation of two rival power centers in Bihar — an upper caste center and an upper OBC center. Nitish Kumar's break with the NDA and later joining of hands with Lalu has solidified a Yadav, Kurmi-Koeri, Muslim alliance against the NDA's Forward-Dalit alliance. The extent of consolidation of these two alliances, of course, is an open question. For instance, the BJP has fielded 22 Yadav candidates in an effort to poach the RJD's core supporters, and the Grand Alliance could receive a significant percentage of Dalit votes excluding Paswans and Musahars.

But leaving the question of relative consolidation aside for the movement and adding up the "caste arithmetic" of each alliance, it is clear that the EBC vote, at around 30% of the electorate, will decide the election. Since the grand alliance, if it can hold its social base together, has a slight advantage, the NDA will need to receive a greater share of EBC votes in order to emerge victorious. But if the 2014 elections are any indication, this is a very real possibility.

So the Bihar election is not at all about "caste versus development" since most people still prefer Nitish Kumar as a development-oriented CM. And respondents to the CSDS pre-poll survey who listed "development" as their major issue split their support evenly between the NDA and Grand Alliance. While some younger voters - particularly those who have spent time outside the state — may care less about caste than their older relatives, there are no real indications that the youth vote will be a decisive force in the election.

Both campaigns began by centering on branding Narendra Modi and Nitish Kumar resepectively as "men of development." Lalu Yadav quickly unsettled this strategy, describing the elections as a backward versus forward struggle (ye ladaai hai backward aur ahead ki), capitalising on RSS chief Mohan Baghwat's repeated calls for a review of caste-based reservations. And after reports that the NDA performed worse than anticipated in the first two phases, the BJP also moved from a Modi-centric campaign to emphasizing local leaders, especially from the lower castes.

But the "Mandal II" that Lalu Yadav has repeatedly invoked should not be read as a return to the early 1990s. Rather, this reflects an attempt to consolidate the new upper OBC power center and draw votes from EBCs and Mahadalits in villages where upper castes remain dominant. But continued upper caste influence in the bureaucracy, media and criminal worlds make it problematic to govern without upper castes as part of the ruling alliance. Indeed, the alienation of the upper castes is the primary reason for the collapse of governance during the Lalu period. Nitish Kumar has been faced with the unenviable position of relying on an upper caste dominated inner circle to govern even as upper castes have totally abandoned him electorally. There are already indications that Lalu Yadav has forced a shift — the two most important Bhumihar strongmen have been expelled from the JD(U). So one test of this election is whether the grand alliance can win and then govern without the upper castes.

And while there are contradictions within the NDA — with alliance partners HAM and LJP both calling for caste-based reservations in the private sector, something the BJP's upper caste base strongly opposes — their status as junior coalition partners makes these tensions manageable.

What is clear is that both the grand alliance and the NDA represent alternative formations of dominant castes. This explains the absence of issues such as land reforms and NREGA — appealing to tenants and laborers respectively — in the campaign so far from either side. And while EBCs and Mahadalits are enjoying unprecedented electoral attention as both alliances fiercely compete for their votes — their choice ultimately ends up being between two dominant groups that they will have to live with. For instance, while nearly 50% of the BJP's candidates are upper caste, only 14% are EBC. And the grand alliance has allotted less then 9% of their tickets to EBC candidates but 45% to upper backward Yadavs, Kurmis and Koeries.

Whichever way the election plays out will reshape Bihar's political geography is profound ways. But while EBCs and Mahadalits will decide the result of this election, a long struggle remains for these castes to achieve meaningful political empowerment.

A political anthropologist, Jeffrey Witsoe has studied caste empowerment in Bihar and was associated with the Centre for the Advanced Study of India at University of Pennsylvania