The Kolkata giants become the first Indian club to win a tournament on foreign soil by beating favourites BEC Tero Sasana of Thailand in Jakarta, which once again proves to be a happy hunting ground for Indian soccer 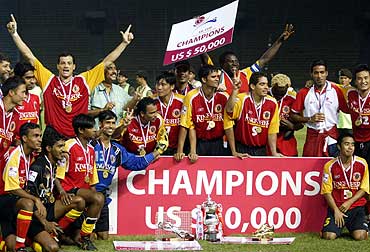 East Bengal became the first Indian club to win an international tournament on foreign soil when they beat favourites BEC Tero Sasana of Thailand 3-1 to lift the LG Cup ASEAN club football championship in a thrilling final in Jakarta.

The hard earned victory against the Asian Champions' League finalists made East Bengal richer by $50,000. It was a sweet revenge for the Indians who had lost 0-1 to the Thais in the league phase.

Leading by a 28th minute Mike Okoro goal at the break, East Bengal stretched their lead to 2-0 with golden boot award winner Baichung Bhutia taking his tournament tally to nine in the 48th minute.

Alvito D'Cunha sealed the issue in the 69th minute after the Thais tried to come back through a goal by Panai Kongpaphan in the 58th minute.

Bhutia, who was declared the man-of-the-match, continued with his rich form and ended the tournament on a high with his solo second goal which put the Thais firmly on the back foot even as they were trying hard to nullify Okoro's strike.

On a quick counter attack, Bhutia snatched the ball from Thai defender Thanongsak Pajakkta after a one-to-one battle. He went inside the box, pulled the goalkeeper out of position, and regaining his step after a slip, found the net with a firm right foot shot.

The Geloran Senayan Stadium once again turned out to be a lucky venue for Indian soccer, where India had won the Jakarta Asian Games gold medal in 1962.

The two teams began with a couple of raids on either end with Therdsak Chaiman, the most valuable player of the tournament, and Okoro caught in the offside trap in the early minutes of the match.

Even as Sasana looked like taking control with greater possession with more of action in East Bengal's half, the Kolkatans came back with some intellingent bout of passing which unsettled the Thais.

Soon East Bengal went into the lead through a snap goal which totally caught the Thais off guard in the 28th minute.

Lurking near the rival danger area, Okoro latched on to a guided through pass from the centre circle by Brazilian Douglas De Silva. Wriggling for space between the rival defenders, Okoro, starting only his second match of the tournament, found the target with a powerful right footer that crashed into the net.

Returning from an injury and repaying coach Subash Bhowmich's faith in him, Okoro then ran to the sidelines and did a Bebeto style craddling. Soon the other players including Douglas, Bhutia, Alvito D'Cunha, skipper Suley Musah and Sashti Duley joined him in the celebration.

With their tails up, East Bengal mounted further pressure but efforts by Surkumar Singh, Alvito and Duley did not bear fruit.

At the other end, Sasana were desperate to equalise before halftime and Nigerian Adu Sunday Omojola threatened twice but was crowded out by the alert East Bengal defenders.

In the first half injury time, Anuchai Katpongsri really threatened with a quick move, which the Indian team averted by conceding a corner kick.

Rattled, the Thais began the second session determined to make amends and immediately went in search of the equaliser. But Bhutia, who had other ideas, spoiled all their plans putting East Bengal 2-0 ahead three minutes into the half.

Five minutes later, the Kolkatan outfit got a fine opportunity to increase the lead when Douglas put Bijen Singh through, but the Manipur lad's effort went just wide.

The Thais were now fighting with their backs to the wall and replaced Omojola with Wuttiya Yongant. The move paid off quickly as the substitute combined with Kongpaphan to pull his team back into the match with 32 minutes of play left.

The Thais, who upset Asia's star clubs enroute to the AFC Champions' League final, were now really on the boil and tried to even the contest.

Chaiman came close in the very next minute but after surviving the onslaught for the next ten minutes Alvito left his indelible stamp on the final scoring with a thundering right footer from just outside the box.

Receiving the ball on his left leg, following a quick sally by Surkumar through the right, he quickly changed the ball to his favourite foot and blasted home giving no chance to 'keeper Phansa Meesattham.