Dreams Do Not Die

khwaab marte nahiiN... Faraz is gone. And this may be a good time to salute that gang of Pakistani troublemakers who shaped its progressive Urdu aesthetic, and who continued to sing and write poems about the commoners in their distinctive met 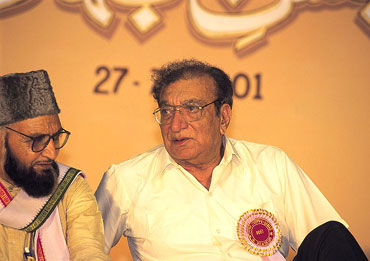 With the passing of Ahmed Faraz, Progressive Urdu poetry in Pakistan arguably finds itself at the same crossroads that its Indian counterpart found itself in May 2002, when the final tributes were being paid to Kaifi Azmi. The last stalwart of a great generation has passed, and while the traditions of the progressive aesthetic continue to be important, there is no one to pass the baton to. And in mourning the loss of this final pearl, it is time to look back appreciatively on the necklace, or the community of troubadours that had acted as the interlocutors of Pakistani society on behalf of the masses, and of the socialists.

To remember Faraz is to invoke the memory of Habib Jalib (d. 1993) and of Faiz Ahmed Faiz (d. 1984). Their stories are stories of hope and exultation, but also stories of exile and incarceration, and of the multiple tragedies that befell the progressive movement in Pakistan over the past five decades.

It began soon enough after the formation of Pakistan when Faiz found himself interred in Lahore’s Montgomery Jail in 1953, accused of treason by a government that was alarmed at the popularity of the socialist movement, and its littérateurs. To the young Faraz, this was an especially impressionable moment, when a staunch patriot was ironically accused the crime of treason. Faiz’s anguished cry became a powerful inspiration to him.

I offer my self in sacrifice to you, my dear nation
Where it has been decreed that none should walk with heads held high

Faraz’s youth was shaped in the company of these stalwarts. He must have been in his 20s when Habib Jalib, the fearless critic of Ayub Khan’s martial law (and his emerging economic policies of elitist neoliberalism) had written and sung:

A lamp that sheds light only on palaces
That caters to the whims of a chosen few
That flourishes in the shadow of compromise
This system, this light-starved morning
I do not accept! I do not accept!

Jalib’s multiple incarcerations had the effect of steeling Faraz’s resolve, especially during the period in Pakistan when Zia-ul-Haq’s undemocratic rule threatened the polity like no other. The venality of Zia’s regime forced Faraz into exile, and in his poetry, he imagined himself besieged, at the receiving end of an implacable foe:

My mortal enemy has sent me a message
That his soldiers have me surrounded
That every roof and minaret of my city
Is ringed by his archers, awaiting me.

It is safe to assume that Faraz did not take well to dictatorship. In 2006, the veteran and respected poet returned the prestigious Hilal-e-Imtaz award to protest the dictatorial regime of Parvez Musharraf. Faraz’s engagement with the Pakistani polity was understandably muted in his last years due to his failing health, but this one act brought back the memories of an engaged artist, and immeasurably helped legitimize the anti-Musharraf sentiments in Pakistan.

Faraz’s poetry often dripped metaphor to the point of crossing the line into a melodrama that invoked an earlier age. Consider the lines from his poem chaNd naadaaN, chaNd diiwaane (A few passionate novices), where the spirit of revolution is invoked in language that could well have come from the 1930s:

In the murderous darkness
Having lit the torches of their determination
Carrying the sparks of rebellion in their hearts
In the intimidating shadows of danger
Heads high, lives on their lips, and eyes on the palace
Carrying red, bloodstained banners
They march with frenzy
A few passionate novices.

Aesthetes of the Urdu ghazal tradition will always remember him for the extraordinary poignancy of his love ghazals. Who can forget these lines made eternal by Mehdi Hasan’s extraordinary voice and echoed later by Talat Aziz, Runa Laila and a variety of singers:

If it is grief so be it, come to break my heart again
Do come, if only for the act of leaving me again

Faraz’s poetry worked simply because he was willing to let the metaphysical intrude into his politics and his poetry, but without forsaking the demands of rhythm and meter. His ghazals were always marvels of crafting, with their obligatory references to lost loves and the joys of union. His politics shone through in his poetry though, with powerful indictments of militarism and the undemocratic phases that Pakistani polity tended to fall into with distressing regularity. Faraz was especially disenchanted with the passion-less landscape that Pakistani politics had turned into, with its distressing turn toward conformism. These two sh'rs are illustrative:

Somebody, write the story of this passionless era
Of bodies like ice, of blood like water
Of how hands were separated from bodies
And why the pen ceased its journey on paper.

The death of Faraz has silenced one more pen that was intent on writing the new history of Pakistan, with flair, and with honesty in its advocacy for the wretched of the earth. Whither progressive Pakistani poetry now? Well, any literary tradition that boasts of Fehmida Riaz and Kishwar Nahid does not need to worry about its immediate future. And the hegemonic power of the progressives can be counted on to continue its influence on Urdu poetry, and its prose. But the moment is at hand. Faraz is gone. And this may be a good time to salute that gang of Pakistani troublemakers who shaped its progressive Urdu aesthetic, and who continued to sing and write poems about the commoners in their distinctive metaphor, in the most challenging of conditions. Alvida.

Mir Ali Raza helps edit Samar, the South Asian Magazine for Action and Reflection. He is also the co-author of Anthems of Resistance: A Celebration of Progressive Urdu Poetry