Zardari's declarations of intent notwithstanding, the nightmare that is Pakistan cannot be transformed unless the country's political establsihment and Army join forces in an unambiguous repudiation of terrorism as an instrument of state policy. 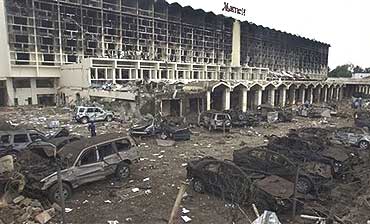 "I have a dream", Pakistan’s new President, Asif Ali Zardari intoned in his first address to the Joint Session of Parliament on September 20, 2008, "My dream is to free this great country from the shackles of poverty, hunger, terrorism and disunity… to heal the wounds of the past, to restore the trust in the Federation…" Warming up to his theme, he declared, "We must root out terrorism and extremism wherever and whenever they may rear their ugly heads."

Just hours later, and a stone’s throw from the setting of the President’s address at Parliament, a truck-full of explosives was driven into the Mariott Hotel, a popular landmark in the heart of Islamabad’s most exclusive – and securitized – neighbourhood. On last count, at least 53 persons – including the Czech Ambassador to Islamabad – had been killed, and 266 injured (a significant number of people remain ‘unaccounted for’ and the death toll is expected to rise). The six-wheel truck was variously estimated to be carrying 1300 pounds of a cocktail of TNT, RDX, mortar shells and aluminium powder, and left behind a 25-foot deep crater. The Mariott was completely gutted in the explosion and the raging conflagration that followed.

No group has, yet, claimed the attack, but Pakistan’s Interior Minister, Rehman Malik, pinned the blame on the Tehrik-e-Taliban Pakistan (TTP), which has been responsible for a succession of terrorist attacks across Pakistan after the Army operation since late 2007, including, most recently, the suicide bombing at the Pakistan Ordnance Factory in the cantonment town of Wah, some 30 kilometres from Islamabad, which killed at least 70 persons in what has been described as the deadliest attack on a military installation in the country’s history. The TTP has also led a campaign of attrition against the Army and paramilitaries in the Federally Administered Tribal Areas (FATA) region and parts of the North West Frontier Province (NWFP), particularly Swat.

The Mariott bombing is also being seen as a retaliatory attack in the wake of ongoing military operations in the Bajaur Agency, which have killed at least 778 militants since the launch of the campaign on August 6, 2008 [in addition to 49 civilians and 27 Security Force (SF) personnel; data compiled by the South Asia Terrorism Portal]. A total of 865 militants, 114 civilians and 45 SF personnel have been killed across the FATA region over this period, even as another 576 persons have been killed in the North West Frontier Province (NWFP, 300 militants, 228 civilians and 48 SF personnel). Total fatalities in on-and-off military campaigns and terrorist operations in the NWFP and FATA areas through 2008 amount to 3,356 (till September 21), including 516 civilians, 144 SFs and 553 militants in NWFP, and 445 civilians, 158 SFs and 1,540 militants in FATA. A bulk of ‘militant’ fatalities have been inflicted through air operations, and there are widespread apprehensions that a large proportion of the ‘terrorist fatalities’ would, in fact, comprise civilians. [Total fatalities may also be higher, given the limited access the Press has to the regions of conflict and the Government’s proclivity to suppress information].

On August 5 – a day before the latest military operations in the Bajaur Agency were launched – the TTP had warned that it had prepared highly motivated ‘boys and girls’ who were ‘eager’ to mount suicide attacks all over the country, targeting high-profile Government functionaries and establishments, if the SFs did not immediately halt operations in Swat, and the Government did not reverse its decision to launch military operations in other tribal areas. At this stage, TTP cadres were also threatening Khaar, the regional headquarters of the Bajaur agency, which appeared to be confronting imminent collapse.

Worse, the virtual meltdown in the FATA and NWFP regions is part of a widening crisis across the country. According to one media estimate, as many as 354 explosions have been engineered by Islamist terrorists in Pakistan in year 2008 alone (till September) with at least 781 persons killed in these attacks. Of these, 33 were suicide attacks, with the three worst hitting the national capital, Islamabad.

The new dispensation at Islamabad has little to offer as solution or relief in this context and, as Ahmed Rashid notes, "the radical threat is now beyond easy military solution". In his address to Parliament, President Zardari once again trotted out the ‘comprehensive three-pronged strategy’ that has been the stock in trade for several years now, has been inherited from the predecessor Musharraf dictatorship, and has demonstrably and repeatedly failed in the past. Neverthelesss, Zardari outlines this ‘strategy’:

First, to make peace with those who are willing to keep the peace and renounce violence.

Second, to invest in the development and social uplift of the local people and,

Third, to use force only as a last resort against those who refuse to surrender their arms, take the law into their hands, challenge the writ of the Government and attack security forces.

That this strategy will have little positive impact on the ongoing and escalating conflict is not only a consequence of the historical record, but of inherent contradictions that the establishment in Pakistani refuses to address. The critical issue, in this context, is Pakistan’s continued engagement with terrorism as an instrument of state policy, and its efforts to retain the Taliban as its proxy in Afghanistan, as well as a range of terrorist groups – prominently including the Lashkar-e-Toiba (LeT), the Jaish-e-Muhammad (JeM), the Harkat-ul-Jihad-al Islami (HuJI), the Hizb-ul-Mujahideen (HM), and other constituents of the Muttahida Jihad Council – as its cat’s paw against India. Unfortunately for Pakistan, the clear distinction it sought to maintain between its ‘loyal’ groups and those that had turned renegade and joined forces with the al Qaeda and hostile elements of the Taliban is no longer sustainable. Mobilised on a pan-Islamist ideology, a majority of these groups see common cause with the al Qaeda, and are incensed at Islamabad’s perceived perfidy in collaborating with ‘satanic’ Western forces, led by the US along the Pakistan-Afghanistan border. Their virulence has escalated manifold with increasing US-NATO attacks across the border into Pakistan, and including at least one such attack, on September 3, 2008, that involved ground forces.

Significantly, there is wide consensus that Pakistan has simply failed to build up its counter-terrorism capabilities over the past seven years of generous US assistance, and that an overwhelming proportion of the USD 7 billion military aid package has been diverted to the acquisition of heavy arms, aircraft and equipment essentially for conventional warfare against India. The result, as one unnamed Western military official at Islamabad expressed it, is that the paramilitary forces, including the Frontier Corps, who are the principal ground forces for the counterterorism campaigns in the FATA and NWFP regions, are left with little more than "sandals and bolt-action rifles".

Politically correct rhetoric on ‘rooting out extremism and terrorism’ cannot alter the reality that the Pakistani Army, the Inter Services Intelligence (ISI), and powerful lobbies within the political establishment – including elements within the ruling coalition – continue to regard Islamist extremist mobilisation and terrorism as necessary elements, not only for the projection of Pakistani ambitions in the external environment, but of internal politcal management as well. Zardari’s declarations of intent notwithstanding, the nightmare that is Pakistan cannot be transformed unless the country’s political establsihment and Army join forces in an unambiguous repudiation of terrorism as an instrument of state policy. The intensity and magnitude of the attack at the Marriott may serve as an urgent warning to the establishment of the ruination they have brought on themselves and on their country. It remains to be seen, however, whether it will be sufficient to break old habits of response, and deeply ingrained – though perverse – systems of belief that have been the fountainhead of policy and of terror in Pakistan.