Congress pulls off a surprise verdict as Asom Gana Parishad (AGP) battled suspicions that it was moving too close to Assam United Democratic Front (AUDF), and, ironically, that it may have actually had a secret understanding with the BJP. 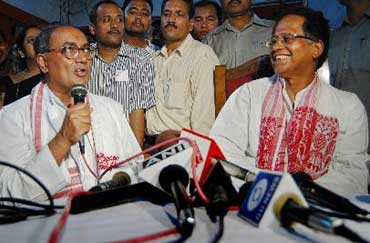 Creating history, leading the Congress to victory in succession, Tarun Gogoi seems once again set to assume the hot seat in Assam, dashing the hopes of the opposition Asom Gana Parishad (AGP) and the baby on the block, the Assam United Democratic Front (AUDF) which wanted to play kingmaker.

What is truly significant is that while the state delivered a fractured mandate, and the Congress had a loss of as much as 18 seats compared to last elections, and a swing of 11.4% away from it, it is the fractured nature of the opposition that allows it to cross the magic half-way figure -- its 53 seats in the 126-member assembly, with the support of Bodoland People's Progressive Front (BPPF), with which it had a pre-poll understanding would enable it to reach the majority mark of 65.

‘The verdict is an endorsement of my party’s governance. Our focus on peace and development has paid off," Gogoi told outlookindia.com. The Congress’ individual tally has been impressive for a party seeking re-election, and, therefore, the party may not need to rope in other parties other than its ally, the Bodo People’s Progressive Front (Hagrama faction), except a few independents.

The AGP accepted defeat, but several of its leaders said the party had to pay the price for the ‘wrongs’ done by the party government headed by former chief minister and founder president Prafulla Kumar Mahanta, who had walked out to form the AGP (Pragatisheel). ‘We spent much of our time repairing the damage done by our earlier leader,’ AGP spokesman Apurba Bhattacharya said. 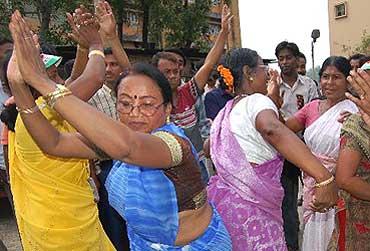 On a day when the Congress reversed Assam’s 20 year old electoral history of a see-saw verdict, the party received a shock with Pradesh Congress president Bhubaneswar Kalita losing his seat in Rangiya, in Kamrup district. Kalita was hoping to be chief minister of a Congress-led coalition in a scenario if the party required support from parties like the AUDF.

Officially, however, the party had not declared its chief minister, projected anyone for the top post in its campaign but with the defeat of state Congress chief Bhubaneswar Kalita, the incumbent chief minister seems all set to retain his job. Three senior leaders including Mohsina Kidwai and AICC General Secretary Digvijay Singh have been dispatched to Guwahati and the meeting of the newly elected Congress Legislature Party will be held at Guwahati on May 13 to elect its leader.

Top Congress dissident leader Devananda Konwar also lost the polls, but what came as yet another surprise for the party was the defeat of Transport Minister Anjan Dutta, credited with reviving the ailing Assam State Transport Corporation back on rails after this PSU was in the red. Several ASTC employees had committed suicide before Dutta succeeded in turning it around.

The Congress had approached the polls on a positive plank, seeking votes on the strength of its peace and development agenda. When it won the 2001 polls, the state treasury was faced with a Rs 500 crore deficit. ‘Today, we have a surplus of more than Rs 1300 crore," said Himanta Biswa Sharma, Minister of State for Finance in the outgoing ministry and Gogoi’s main troubleshooter.

Aside from the AGP itself, major parties to be disappointed at the regional party’s rout will be the Telegu Desam and the Samajwadi Party. That is because, the two parties had the AGP in mind, aside from parties like the National Conference, while pushing ahead with its ‘third alternative’ plan. But SP leader Amar Singh said its ‘third alternative’ plan will remain. ‘We have a bigger role in mind, not just winning elections," he said.

Among the reasons for the AGP’s defeat is the impression that the party was moving dangerously close to the AUDF, a party seen to be interested in protecting the interests of the Muslim settlers. Ironically, the Congress campaign that the AGP could actually be having a secret understanding with the BJP may have also made the party (AGP) suspect in the eyes of the Muslim voters.

Results At A Glance