The Supreme Court stays implementation of the 27% OBC quota policy and asks the government not to divide the country because of its "vote bank" and to "determine who are the socially and economically backward". 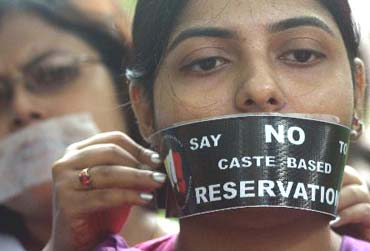 The SC Bench comprising Justices Arijit Pasayat and L S Panta today ruled on the batch of petitions filed by various organisations and individuals challenging the 2006 Act as being ultra vires the constitution. These organisations had further challenged the centre's decision to implement the quota, claiming that there was no relevant data on the number of OBCs in the country.

The Bench ruled, "We are of the view that the impugned notification and enforcing the reservation for OBCs in the educational institutions must be put on hold as the government has failed to provide any authentic or reliable data to justify its policy of reservation. What may have been relevant in 1931 census may have some relevance but cannot be the determinative factor.

The lawyer for United Student's Forum, one of the petitioners against the Act, M L Lahoty, said that the Bench had reprimanded the centre by saying: "Don't divide the country only because of your vote bank ...the consequences of this quota would be very bad'."

"Reservation cannot be permanent and appears to perpetuate backwardness," the Bench observed, pointing out that the centre should stay away from dividing the society on caste basis and should behave in a more responsible way, and that the government's decision to implement the quota system was full of flaws.

Today's order effectively puts into jeopardy government's plan to implement the new quota regime in the elite institutions and central universities from the coming academic year; coming as it does just before the UP elections, the political cost of the Supreme Court justice is immediate.

The judgement has therefore predictably come under immediate attack from pro-reservation parties who have called it "retrograde, uncalled for and unfortunate" while those opposed to the Act are understandably relieved. HRD Minister Arjun Singh, the so-called brain behind the law, meanwhile maintains that Parliament will stick to the provision.

Who Are The Backwards?

The centre had maintained that in the absence of data after 1931, there was no alternative but to project population proportion of socially and educationally backward classes and OBCs from the only source available. Holding that the government failed to explain as to why a firm data base could not be evolved first, the Bench kept on hold the operation of the relevant provision of the Act dealing with reservation for the OBCs.

Disposing off the petitions against the Act passed in December last year, the court said it will examine on merits the constitutional validity of the Act in the third week of August. However, it allowed the government to initiate the process for determining on a broad-based foundation as to what constitutes "Other Backward Classes".

"The centre has to determine who are the socially and economically backward people of India, before the Central Educational Institutions Act can be given effect," the Bench stated. "We are of the view that the impugned notification and enforcing the reservation for OBCs in the educational institutions must be put on hold as the government has failed to provide any authentic or reliable data to justify its policy of reservation". It, however, clarified that the benefit of reservation for the Scheduled Castes and Scheduled Tribes could not be withheld and the centre can go ahead with the identification process to determine the OBCs.

"...It would be desirable to keep on hold the operation of the Act so far as it relates to Section 6 thereof for the OBCs category only. We make it clear that we are not staying operation of the statute, particularly, Section 6 so far as the SC and ST candidates are concerned," Justice Pasayat, writing the judgment for the Bench, said.

The Court said that while dealing with reservations, the concept of "creamy layer" becomes important as the centre has maintained that it was applicable to only Article 16 (4) and not Article 15 (5) of the Constitution.

Observing that the concept of creamy layer cannot prima facie be considered to be irrelevant, the court said "it, therefore, needs no reiteration that the creamy layer rule is a necessary bargain between the competing ends of caste based reservations and the principle of secularism. It is a part of Constitutional scheme".

Although the state, the Bench clarified, is constitutionally empowered to enact affirmative action measures for backward classes, "differentiation or classification for special preference must not be unduly unfair for the persons left out of the favoured groups".

With the final hearing postponed till the third week of August, the government is faced with the task of providing adequate and sufficient data on OBCs to the Supreme Court. Would the government be able to do within four months what it has not been able to do for the past so many years? Clearly, the UPA government's main agenda for wooing the OBCs has hit a constitutional road-black.

But the government cannot act surprised or shocked. After all, the constitutional provision is well-known and a similar court decision had forced the government to take the Parliament route to pass the OBC quota law. In August 2005, in the Inamdar Case, the Supreme Court had quashed quotas in unaided minority and non-minority institutions, pointing out that it was a violation of their autonomy and freedom.

The politicians had reacted by passing a unanimous resolution calling for OBC quotas in unaided institutions. That is when Mr Arjun Singh got into the act in 2006, who introduced the 93rd amendment in the form of a bill granting 27 per cent OBC quota. It had led to resignations by the country's most respected intellectuals from the Prime Minister's Knowledge Commission. This bill was referred to a parliamentary standing committee, which had recommended that the creamy layer be left out, as per the well established law in the Indra Sawhney case. It was pointed out that quota for the creamy-layer would be patently unconstitutional, and initially the CPM had also opposed the inclusion of creamy layer. Eventually, however, populism had won the day and the government went ahead by including the creamy-layer as beneficiaries as well.

Typically, the politicians would want to make it into one more case of judicial intervention in its domain and instead of providing data that could satisfy the court, the political class may cynically respond by bringing an amendment to over-rule the SC's stay. But that is bound to be challenged in court, and the court could well once again strike it down. However, if the government is really interested in uplifting the lot of the "backward" it would do well to exclude the creamy layer and to provide authentic data to the court so that those who genuinely need reservation could actually be granted the benefit.