This was the first ever visit of the defence minister to the DBO sector and to one of the highest posts in Eastern Ladakh. 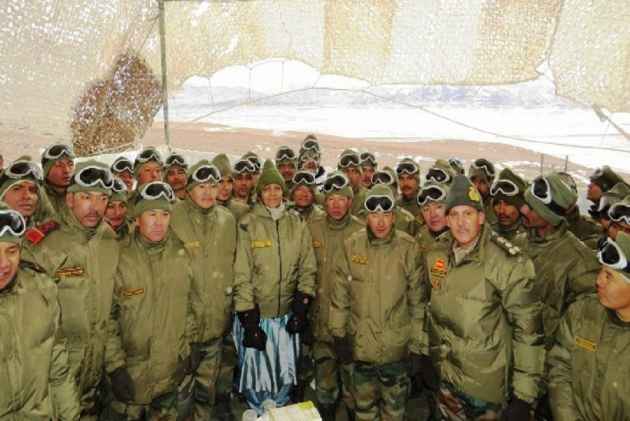 Defence Minister Nirmala Sitharaman has visited the forward posts along the Sino-India border in the Ladakh region of Jammu and Kashmir and interacted with the jawans deployed there.

Sitharaman visited Daulat Beg Oldie, the world's highest airfield, situated at a height of 16,700 feet in eastern Ladakh, where the temperature plummets as low as -55°C in winters in the area, on Saturday.

A defence spokesperson said, "The Defence Minister had earlier arrived at Thoise, a base-camp of the Indian Army along the India-China border, where she was briefed on the operational preparedness by the officers of the Army. She then visited the highest post in the Daulat Beg Oldie (DBO) sector and Chushul along the Sino-India border in Eastern Ladakh and interacted with troops".

This was the first ever visit of the defence minister to the DBO sector and to one of the highest posts in Eastern Ladakh.

"She was flown in an Army Aviation advanced light helicopter (ALH) helicopter. Lieutenant General D Anbu, Army Commander Northern Command and Corps Commander of the Ladakh Corps, accompanied her during the visit," the spokesperson added.

Sitharaman complimented troops for their steadfastness and dedication despite the harsh climate and terrain. Her visit has further boosted the morale of the troops deployed at these extremely difficult snow-covered locations in Ladakh.