Terrorism cannot be defeated unless costs – indeed, unbearable costs – are imposed on its state sponsors, who are only encouraged by concessions. Increasing external and internal pressures is the only way to dissuade Pakistan. 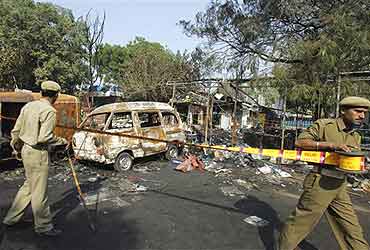 The serial bombings at Delhi on October 29, 2005, were described by one commentator as an ‘attack on the spirit of the nation’. Three days before the Hindu ‘festival of lights’, Diwali, days traditionally reserved for shopping for the celebrations, terrorists planted three bombs in crowded public places – the Sarojini Nagar Market, the Paharganj Market, and a public transport bus in Govindpuri – killing at least 59 persons and seriously injuring over 155.

No official determination has still been made regarding the group responsible for the attacks, but an analysis of preliminary evidence and past trends in terrorist activities – including the continuous succession of arrests and seizures of arms and explosives in and around Delhi – pointed unfailing to one or another of the many terrorist groups supported and sponsored by Pakistan. And the needle of suspicion becomes the more steady with the statement by the Islami Inqilabi Mahaz (IIM, Islamic Revolutionary Movement), claiming responsibility for the Delhi serial blasts.

While the claim is still to be verified, sources indicate that it is useful to note that the IIM is a front organisation of the Lashkar-e-Toiba (LeT), now renamed the Jamaat-ud-Dawa or JuD). Indeed, sources indicate, when the Lashkar first commenced operations in Jammu and Kashmir (J&K), it chose to initially operate under the banner of the Lahore-based IIM. While no extraordinary operations are attributed in India to the IIM, several of its cadres were arrested between 1993 and 1996, and these included Zulfikar Ali Shah, a Pakistani National, arrested in February 1993, who figured on the original list of prisoners whose release was demanded by the IC 814 hijackers in December 1999 (the list was subsequently pared down, and Shah was left out).

The IIM also featured in the US Patterns of Global Terrorism, 1997, Report in connection with the killing of four US citizens in Karachi:

In November (1997) four US employees of Union Texas Petroleum and their Pakistani driver were murdered in Karachi when the vehicle in which they were traveling was attacked 1 mile from the US Consulate in Karachi. Shortly after the incident, two separate claims of responsibility for the killings were made: the Aimal Khufia Action Committee – a previously unknown group – and the Islami Inqilabi Mahaz, a Lahore based group of Afghan veterans. Both groups cited as the motive for the attack the conviction of Mir Aimal Kansi, a Pakistani national who was tried in the United States in November for the murder of two CIA employees and the wounding of three others outside CIA Headquarters in 1993. Kansi was found guilty and sentenced to death.

It is significant that the charges for these murders were eventually pinned on two members of the Mohajir Qaumi Movement (MQM), Saeed and Salim Ganja, by an Anti-Terrorism Court at Karachi, and a sentence of death was handed down in August 1999. However, a Karachi court subsequently acquitted the accused, and the actual perpetrators of the 1997 killings have yet to be found.

Available information, consequently, suggests that the 29/10 attacks were, in fact, engineered by the LeT, which has sought to distance itself from the incident by claiming the incident under this long-dormant identity – a practice that it has followed in the past with several other identities, including Al Mansoorian, Al Afreen and the Salvation Front. And it is significant to note that the LeT’s founder and Amir (chief), Hafiz Mohammad Saeed, operates freely in Pakistan, and has recently been much in the news leading the most prominent jehadi initiatives in the earthquake relief operations in Pakistan occupied Kashmir (PoK). There is no secret about his presence and freedom to operate in Pakistan, and his unambiguous links with the terrorist LeT. The LeT/JuD remain the most prominent representatives of the gaggle of sarkari jehadi groups in Pakistan – groups that enjoy the protection and patronage of the state and its covert agencies.

While definitive identification of the group responsible for this most recent atrocity must wait on the investigations currently under way, it is essential to recognize that this incident confirms the strategic continuity of Pakistan’s broad orientation towards India, and its sustained enterprise of encirclement, penetration and subversion, with an objective to do as much damage as is opportunistically possible, under the cover of (no doubt diminishing) credible deniability. It is useful to recognize, here, that the present attacks fall entirely within past patterns, and there have, in fact, been at least 25 occasions since 1997 on which bomb blasts have been executed in Delhi by Pakistan-backed groups, though this attack has been by far the worst in terms of casualties (followed by the Parliament attack of December 13, 2001, in which 11 persons were killed and 20 were injured).

There have, further, over just the past two years, been dozens of arrests of Pakistan-backed terrorists, and seizures of large caches of arms and explosives in and around Delhi. The groups connected with these arrests and seizures have prominently included the LeT, Hizb-ul-Mujahiddeen (HM), Jaish-e-Mohammed (renamed Khaddam-ul-Islam), Al Badr, Hizb-e-Islami, as well as Khalistani groups, particularly the Babbar Khalsa International (BKI) that was responsible for the May 22, 2005, serial blasts in two cinema halls in the city, and whose entire top leadership is headquartered in Pakistan.

It is important to recognize that, despite the very high toll in life inflicted by the present attack, it does not reflect very high levels of capability. Terrorist groups, when they are well entrenched in a particular area and have evolved sophisticated capacities, will attack strategic targets and vital installations; it is ordinarily when capacities are incipient, or have been significantly degraded by counter-terrorist and intelligence operations, that a group goes in for mass casualty soft targets of the kind witnessed on 29/10. Indeed, the long list of arrests and seizures connected with Pakistan-backed terrorist groups in and around Delhi over the past many years – and, indeed, across India, outside J&K and the Northeast, numbering at least 44 modules over just the 2004-05 period – are a measure of the many other potential threats that were neutralized by intelligence and enforcement agencies before they could be translated into action.

There is, however, no scope for complacency here. Apart from the tragic loss of life, given contemporary technologies, terrorists always retain a residual capacity for generating a major strategic threat, and this cannot be ignored. Regrettably, India’s responses have been restricted to mere policing and intelligence work, and these can never suffice in neutralizing terrorism that enjoys external state support.

India’s policies have, moreover, encouraged Pakistan in keeping a twin track of negotiation and terrorism simultaneously open, and Pakistan knows that, as long as it verbally denies involvement and issues strong statements condemning specific terrorist incidents – Musharraf was quick to describe the 29/10 attacks as ‘criminal and barbaric’ – it can keep the larger enterprise going without danger of Indian retaliation, or even any significant shift in or derailment of the peace process.

This reality was confirmed when, even as news of the enormity of the blasts was building up, several Indian leaders sought to reassure the media, and through them, Pakistan, that the incidents would have no impact on the course of the ‘peace process’, and a settlement was reached with Pakistan during the very night of the attack, on the opening up of five points along the Line of Control for relief to the earthquake affected populations in PoK.

Terrorism, however, cannot be defeated unless costs – indeed, unbearable costs – are imposed on its state sponsors. Regrettably, the Indian leadership does not appear to have the will, the imagination or the capacity to evolve strategies to do so, and will continue to hope that it can buy peace with Pakistan’s current dictator by offering more and more by way of economic benefits and political concessions. Historically, however, terrorists and their sponsors have only been encouraged by concessions.

It is important, within this context, to recognize that the ‘peace process’ between India and Pakistan has had no impact on the trajectory of terrorist violence in J&K – and in other parts of India. This trajectory has demonstrated a steady downward trend since 9/11, irrespective of the alternating tensions or détente between the two countries, and is essentially related to a continuous diminution in capacities to engage in terrorism under cover of credible deniability as a result of increasing external and internal pressures on Pakistan. It is only by sustaining and augmenting such pressures through all means available that Pakistan will, eventually, be dissuaded from its enterprise of terror.