He was firm but loveable, good-natured and real. Like my own grandad. 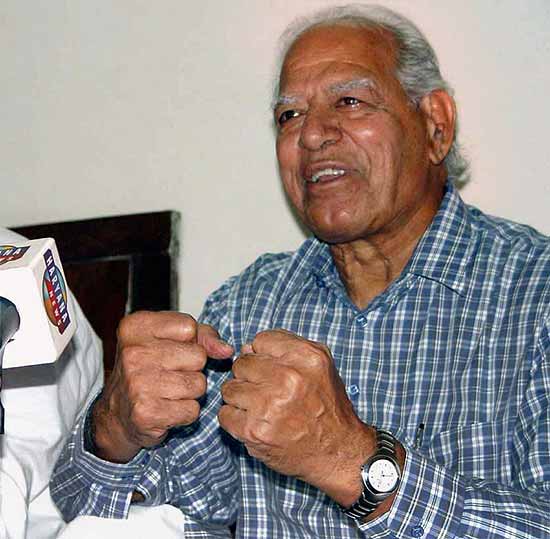 My earliest memory of Dara Singh is as Hanumanji in the Bollywood mythological Jai Bajrang Bali which we kids of the family saw together in a rapture on Doordarshan one afternoon. He made a jolly good, unusually comic Monkey King. One who didn't just fly all the way to Lanka to convey Ram's message to Seeta and set Raavan's city on fire but also sang merrily: Tere prabhu jaante hain baat ghat ghat ki, bajaye ja tu pyaare Hanuman chutki:

Dara Singh's Hanuman didn't just sing and dance, he was also a glutton who emptied Seeta's larder by perennially asking her for more food. "Mattaji prosiye" (spoken in thick Punjabi accent) was his constant demand to Seeta in this scene (1.06 onwards):

Dara Singh's interpretation of Hanuman was not classicist, nor picture perfect. It was about being himself in front of the camera. Dara Singh's Hanuman was bholaa bhaalaa. So was he himself. And we couldn't help warm up to the extremely funny, endearing, affectionate, guileless and innocent presence. We laughed uproariously and instantly fell in love with him. Dara Singh later went on to become Hanuman for an entire generation and played the idol in blockbuster TV serials like Ramayan, as also in one short scene in the Mahabharat:

He was firm but loveable, good-natured and real. Like my own grandad. In Kal Ho Naa Ho (2003) he was the famous Chaddhaji of the Queens whose sweet, autumnal love story with Dadi Sushma Seth could bring a smile to the most humourless of audiences.

Be it as Hanuman then or as a patriarch later, Dara Singh was not a method actor who tried to get under the proverbial skin of the characters. He just brought a lot of himself to them, played it easy, simple and straight.

That's because Dara Singh was not an actor to begin with. He was a champion wrestler in the 50s and the 60s who participated in more than 500 bouts but never lost any -- that the matches were fixed or not didn't really matter. What mattered was that people wanted him to win -- and he did, convincingly. The Rustam-e-Hind's akhara adventures were keenly followed by the entire nation. How he threw King Kong out of the ring is stuff legends were made of. He defined macho in those days when WWF had not yet been conceived nor the term coined. His strong body, built on milk, butter and almonds than steroids, was what the Indian male aspired for long before six pack abs became a fad. He was the one to have taken his shirt off unpretentiously on screen before Salman Khan made a silly statement out of it.

In fact the wrestler took to films in 1952 very reluctantly and on the condition that he'd never play a negative role, will always fight for the good and win over evil. So his earliest avatar on screen, that of a superman or he-man in films like Samson, King Kong, Hercules, Faulad was founded on his victorious innings in wrestling. And in most of these films he had the nubile Mumtaz as his arm candy. It wouldn't be wrong to assert that it was Dara Singh's persona that anticipated the Dharmendra and Akshay Kumar of later generations.

Action sequences like these in Trip To Moon held the audience in thrall. Leave alone humans even aliens couldn't pin Dara Singh to the ground...

And he battled beautifully even inside a flying plane:

In fact this combination of macho films and excellence in wrestling made him an icon who wasn't just an object of fantasy but believable and convincing too. He was an icon who was both fictional as well as rooted in reality. No wonder his stunts on screen were never questioned, never dismissed off with disbelief. There is an anecdote about why Manmohan Desai chose him to play Big B's father in Mard. It was because no other actor would have been credible and compelling enough in the scene where he had to stop a whole big aeroplane with ropes and his two hands (3.26 onwards):

The strong man with a soft heart Dara Singh could make anything possible, seemed invincible. Even at 84 you felt he would win his duel with heart attack. But then perhaps death appealed to his soft, emotional side, persuaded him that it was time to go. And he relented in his usual good-natured and affable way.

Beyond Good And Evil