CPI(M)-BJP Clash: 10-Month-Old Baby Thrown Out Of Car By His Father's Political Rivals 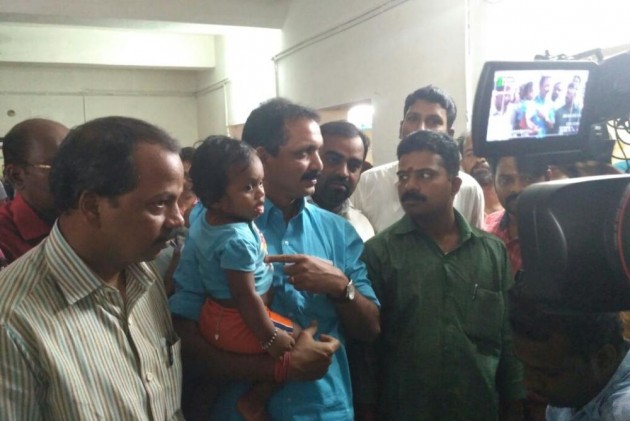 A 10-month-old baby belonging to a dalit family was thrown out of a car by her father’s political rivals in Kerala’s Malappuram district.  The incident occurred in Tirur when CPI(M) workers allegedly attacked a BJP worker.

Circle Inspector of Police in Tirur confirmed to Outlook that the police have received a complaint in this regard. “The baby has been discharged from the hospital and a medical statement is awaited,” he said, adding that a case has been booked against three CPI(M) workers.

BJP Kerala General Secretary K Surendran, who visited the family, said that the child, Kasinathan, was sitting on the lap of his father, Suresh, in the driving seat when the CPI(M) workers attacked them. “They threw the child out of the car while attacking his father,” he said.

The area had been tense due to political clashes in the recent past. A day before the attack on the father-son duo, the area had witnessed an open clash between CPI(M) and BJP workers.

Narrating the incident, Babu K, an RSS worker from the area, said that the child was saved because he fell on the sand on the roadside. The car was parked near a river when the attackers came as the father-son duo was waiting for someone. They broke the car’s window glasses.

Babu, whose leg was broken in a political clash in November 2015, said that the political clashes here have got a communal element as well. Last November, a man was killed in the same district allegedly by RSS workers for converting to Islam.

Recently, Kerala has witnessed a spate of political violence between CPI(M) and BJP workers. On Friday, a BJP worker was burnt to death in Palakkad allegedly by CPI(M) workers who set his house on fire.

Sources in the police said that the three CPI(M) workers involved in attacking the father-son duo are infamous in the area for their political violence with similar cases already existing against them. A police officer on the condition of anonymity said that the police personnel were forced away by CPI(M) workers when they tried to arrest these three culprits from their hideout. “They were about 500 against five policemen. The accused managed to escape in the meantime,” the officer said.

Police sources also said that prima facie they had not found any deliberate attempt to attack the baby, adding that the baby might have been hurt in the attack. Meanwhile, BJP workers including women held protest march to the police station demanding “peaceful life” in the area.