Paradoxically, the keepers of India's cattle themselves perpetuate the worst cruelties against cattle. 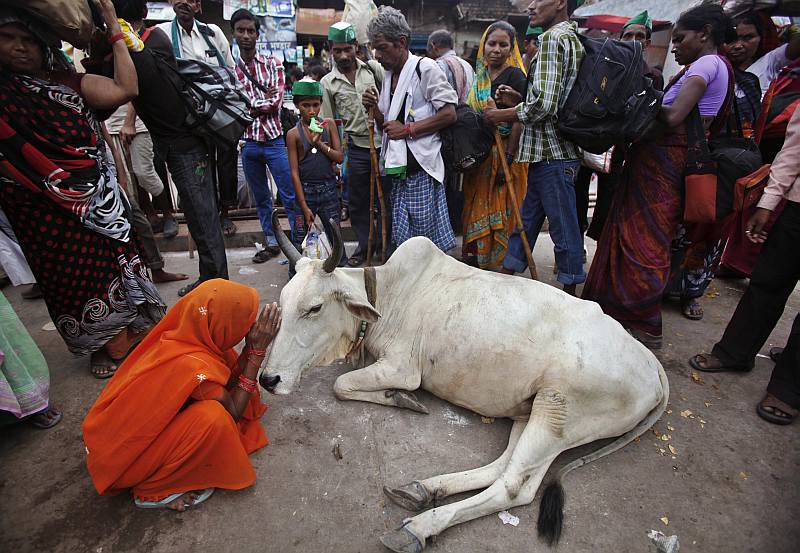 The recent lynching of a poor Muslim at Bisada near Dadri for allegedly possessing beef has been justified as being a matter of religious passion. Religious sentiments have also triggered the meat ban imposed during the Jain festivities though the Bombay High Court passed an interim order lifting the ban imposed by a municipal corporation. The Jains then came to the Supreme Court where Justices Thakur and Kurian bluntly told them "a meat ban cannot be forced down citizens' throats...be tolerant to diversity."

Although there is nothing remotely spiritual in the things people eat, beef has become a red rag igniting unprecedented communal fury. The bigots need to however understand that there is much more to beef than just sentiment. The image of 'Gaomata'...the white 'Mother Cow' with soulful eyes...is beloved to many Hindus but the RSS, BJP and other opponents of cow slaughter would be shocked to know that cows account for only 12% of all the bovines in India. They are also not the main producers of milk because female buffaloes account for 66% of India's milch cattle that produce over 75% of the milk.

The 19th Livestock Census of India, 2012 also shows that India's cows and other female bovines are in no great danger. This census shows that their numbers increased by 7.16% to 216 million since the previous census of 2007. It is the males of the species that are threatened as their numbers declined by 18.6% to 84 million in the same period. As male bovines today account for just 30% of the cattle population it clearly shows that it is the bulls and not cows that are being butchered.

Cattle are a huge economic asset to almost every rural family and the meat industry including bovines, sheep, goats, pigs and poultry put money into the pockets of nearly every rural household and they will suffer great economic loss if India's legislators ban or restrict the slaughter and sale of meat products. Some 40% of the value of livestock comes from meat. Beef, that costs a third of mutton, is also the poor man's protein and is consumed by some 200 million Dalits and other tribal communities. Religious ideologues do not understand that there will be a strong political backlash if religious sentiments take precedence over economic realities. Anyone familiar with rural India knows that while there are many Muslims in the meat business the majority are Hindu.

The census clearly shows that two-thirds of India's cattle is female. This is because the value of male bovines that used to be valuable as draft animals or for meat is declining very rapidly. Few people are aware that it is male animals (or birds) that are mostly used for meat as the females are more valuable as breeders and for milk or eggs. If males are not being used for ploughing or transport they are only useful for their meat or hides. This gender imbalance is increasing rapidly and a recent report from the Central Institute of Agricultural Engineering Bhopal shows that the share of draft animals for farm power on Indian farms declined from 44% in 1971-72 to a shocking 4% in 2012-13 as tractors and electric and diesel pumps had replaced them. Bullock carts are now rare in many rural areas.

The census data shows that millions of male animals have been quietly culled. Male buffaloes declined 17.8% to 16 million while females increased 7.99% to 92 million. There are therefore nearly 6 female buffaloes to every male. It is only in the states where beef is being eaten that this gender imbalance is less pronounced. Paradoxically, the keepers of India's cattle themselves perpetuate the worst cruelties against cattle. As the females are valuable and the males are worthless even though they need food and fodder that costs over Rs. 100 a day, they are killed for meat where it is allowed while in other states they are callously driven away to be devoured by dogs or wild animals.

Several million pregnant female bovines are brought into Indian cities for fresh milk. Half the calves they deliver are males that are an economic liability so they are killed as soon as the milking steadies. They are not humanely slaughtered but are usually tied in the sun to slowly die of thirst and hunger. The state wise data shows that that economic compulsions outweigh religious sentiment in almost all urban and rural areas despite claims to the contrary.

India also has a serious problem with roughly 80 million old and unproductive cattle that are driven away until they die of hunger or illness. They do not harmlessly forage on barren land but, driven by hunger, raid productive farms and face the wrath of farmers who mercilessly beat and even kill them. They are a huge economic liability that takes food and economic opportunities away from millions of needy people. India's 299 million cattle also need roughly 30 million hectares for their grazing as well as an equal amount of additional land for their fodder requirements. This is a huge chunk out of India's 190 million hectares of cropped land. If states legislate against beef consumption if will add many more unproductive cattle demanding land that is not available.

There is no Hindu scripture that is opposed to the eating of meat or even beef. In fact Indra, the tawny bearded supreme Vedic god, was specifically offered the best sides of beef. The Vedas, Mahabharat, Ramayana, Shastras and other ancient texts all endorse eating meat and beef was even specified as the daan, or offering, reserved for Brahmins.

The sentiment against beef is essentially political as it was associated with Muslims. Cow protection became a religious statement when the first movement to protect the cow was started by the Sikh Kuka (Namdhari) sect in 1870. In 1882, Dayanand Saraswati founded the Gorakshini Sabha that challenged beef eating provoking a series of communal riots in the 1880's and 1890's. These led to further communal clashes where many were killed in Azamgarh in 1893, Ayodhya in 1912 and Shahabad in 1917. Beef eating thus quickly moved from being a matter of diet to a defining icon of Hindu versus Muslim identity. Hindu chauvinism could however also make the ban on beef into an symbol of Brahmin tyranny over Dalits for whom beef is their main protein source. There is a strong religious sentiment but politicians as well as officials, and intellectuals need to consider this complex subject before rushing into hasty legislation.