For millions of us, the 1983 win was — literally — a historic event. As a friend said, "I was getting sick of seeing those black and white pictures of Kapil Dev holding the Cup" 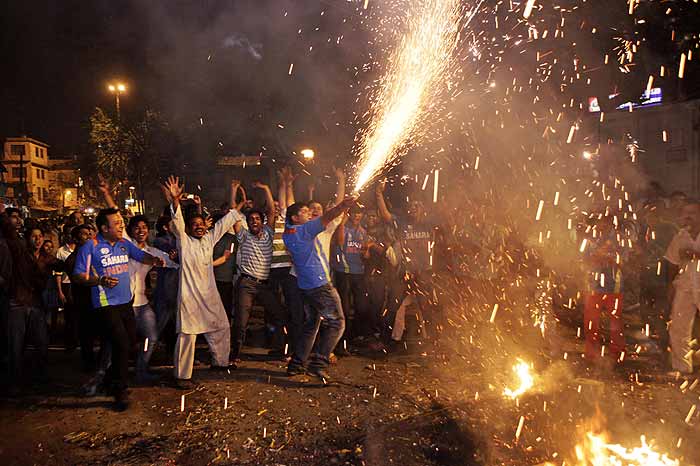 I was alive when India won the Cricket World Cup!

This is precisely how I feel about the win that the Indian cricket team clinched on 2nd April 2011 in Mumbai.

And it's not just me. Hundreds of thousands of people born in my generation -- in fact all those born after that historical win of 25th June, 1983 -- would, I am sure, echo the exact sentiments. Literally.

The ultimate rush of the World Cup fever began to be felt after the victory over Australia, slating India to clash with Pakistan in the semi-finals. For those few days before the 30th of March, the finals simply did not matter. Thrashing Pakistan was the only goal in sight.

And suddenly when even that was achieved and India saw itself in the finals along with Sri Lanka, we wanted that next big thing too. And why not?

I've heard many people around me wonder: Why the craziness? Why the madness over a ball and bat game? Why the effusion of sentiments, emotions and excitement over a mere cricket match?

They forget that, love it or hate it, in India cricket probably has a bigger following than any other religion; in fact, it is a religion by itself. And, of course, for all of us born after 1983, a world cup win was something we only read about as it was something that happened before our lifetimes.

Yes, we got into the finals in 2003 too, but it ended in heartbreak; it was a case of so close and yet so far. Winning the World Cup was something we only dreamt about.

As much as all of India wanted another one of those World cup trophies, it still basked in the glory of the 1983 win -- something that, for millions of us, was literally a historic event. As a friend of mine said after the win, "I was getting sick of seeing those black and white pictures of Kapil Dev holding the Cup."

And so when Dhoni catapulted the ball into the stands for a victorious six, the whole of India cheered. But for this generation, it was special: We finally knew what it felt to win the world Cup! The spontaneous celebrations we burst into was for Dhoni and team letting us share the thrill and exhilaration of being the world champs.

Having watched the finals at a cafe in Khan Market, my friends and I got caught in the mayhem that was building up right in the middle of the city. I have never ever seen the streets of Delhi bursting with celebrations of this kind. The traffic went for a toss. The round-about outside the Taj Mansingh hotel was jammed. But no one seemed to mind it. There was not one car which didn't have its occupants leaning out of their windows, screaming and waving the Indian flag; some people sat on the roof of cars; some people sat on the bonnets.

At the Taj Mansingh chowk, people got out of their cars, had their stereos up to the highest volume and joined hundreds others in dancing away India's win. Strangers hugged, shook hands and cheered. It didn't matter whether you were a cricket fan or not, whether you were young or old, poor or rich. Everyone got together and partied. Later, on heading to India Gate, we saw a similar scene unfolding there as well. What made it ten times more significant was the monument, which stood witness to the city cheering and shouting in joy. 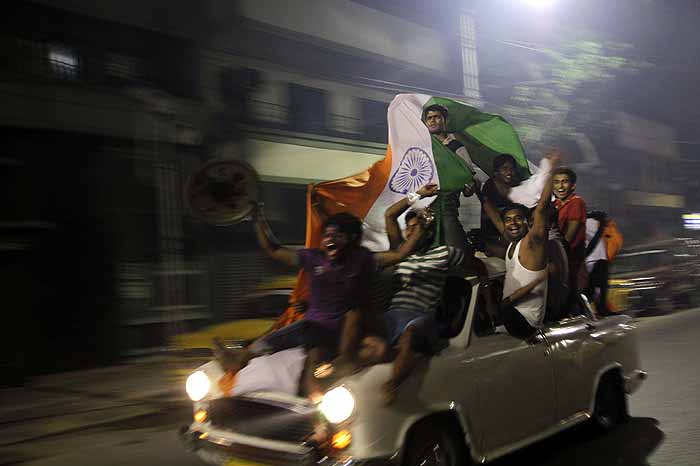 Similar scenes were apparently witnessed throughout the country. This is Kolkata, same night

There were tears of joy, whoops of victory. Later, I learnt that Delhi was not alone, but all of India celebrated pretty much in the same manner. The feeling of spontaneous celebratory insanity had engulfed not just Delhi but the entire country.

And yes, I was alive when India brought home the Cricket World Cup.