Sri Lanka continues to deny any link between its Army and the breakaway Karuna faction of the LTTE. Karuna meanwhile has confirmed that his group is "involved in civil administration" in the Eastern Province of Sri Lanka and that it has a 'close rela 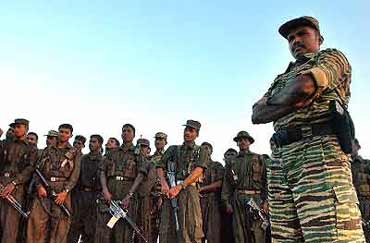 The leader of the breakaway faction of the Liberation Tigers of Tamil Eelam (LTTE), Vinayagamurthy Muralitharan alias Karuna, also known as 'Colonel' Karuna, has finally openly accepted that he has areas under his control. Karuna, who heads a political party, Tamileela Makkal Viduthalai Pulikal (TMVP), and a military setup (often labelled 'paramilitary') now admits that his group is "involved in civil administration" in the Eastern Province of Sri Lanka. In a telephonic interview with The Sunday Times of Colombo March 11, 2007, Karuna said:

"We are indeed functioning in this area for the past two years although it is not known. We reached an agreement with the UNICEF last month, for them to visit our camps in the East. We are involved in civil administration in the areas under our control. We have no intention of having a massive military build up in the areas under us nor are we going to fight the government forces. We have cadres in these camps only to defend ourselves against LTTE attacks. We have a strong political base and we have opened many political offices in Batticaloa and Trincomalee. Today we represent a section of the Tamil people."

Karuna accepted that the TMVP has a ‘close relationship’ with the government and that his party’s members have a close relationship even at a ministerial level. He, however, declined the charges that the group operated as a ‘paramilitary’ and claimed that they functioned independently. On this, he echoes the government position. Speaking in a 'Hard Talk' program with the BBC World Service on March 15, 2007, Sri Lanka’s Minister of Foreign Affairs, Rohitha Bogollagama, refuted the charges that Karuna’s forces were operating as a paramilitary organisation on territory controlled by the Sri Lankan government and claimed that the TMVP was a ‘political party’ registered with the government.

Karuna’s split with the LTTE goes back to his March 3, 2004, refusal, as the LTTE’s ‘special commander’ of the Batticaloa-Ampara region, to send an additional 1,000 troops to the North as requested by the rebel chief, Prabhakaran. Sources suggest that, since there was no operational requirement for this transfer, unless Prabhakaran was planing the resumption of hostilities against the Sri Lankan Army about which he had not consulted Karuna, the latter suspected that this was possibly a prelude to his removal from the leadership of the East, and he consequently revolted. Operations carried out by Pottu Amman, chief of the LTTE's intelligence wing in the East, without consulting Karuna, had also angered him. Soon after defying Prabhakaran's directives, Karuna simultaneously informed the Sri Lanka Monitoring Mission that he and his Eastern troops would thereafter act independently. Later, in a leaflet dated March 4, 2004, Karuna set out his faction's grievances against the Vanni leadership. Among them were:

Further, on March 7, 2004, in an interview with the BBC Tamil Service, Karuna stated that, as a condition for a settlement, Prabhakaran should remove his intelligence chief, Pottu Amman; financial chief, Thamilenthi; and police chief, P. Nadesan.

The Eastern component comprising Batticaloa and Ampara was almost indispensable to the LTTE. The active cadre strength of the LTTE was about 18,000, of which 7,500 were drawn from the Batticaloa and Ampara Districts. More than 2,000 cadres had been recruited or conscripted from the Eastern region after the cease-fire came into force. Being the battle-hardened leader of the East, Karuna was a prize scalp for the government, which was trying to pressure the LTTE.

In April 2004, when the LTTE launched a searing attack against the Karuna faction, he disbanded his forces and escaped with a small group of supporters, allegedly to be welcomed in Colombo. According to a BBC report of June 24, 2004, he was helped to escape by opposition United National Party (UNP) Member of Parliament, Ali Zahir Mowlana. It was also reported that Karuna was seen in hiding in Army safe-houses in Colombo for more that two months, masterminding a series of killings of LTTE cadres and their supporters in an attempt to weaken the outfit. The government Information Minister Mangala Samaraweera also accepted the allegation and admitted that Military personnel were involved, adding, however, "I mean that we cannot deny, but not with the knowledge or connivance of the government."

The ‘close ties’ between the Sri Lanka government and TMVP are said to have been the decisive factor behind the recent successes of the Sri Lanka Army (SLA) in Mavil Aru and Sampur in the Trincomalee District and Vakarai in the Batticaloa District. The government forces are also making inroads with the ongoing operations in the Thopigalla jungles and other LTTE-held areas. The SLA has used Karuna’s knowledge of the hinterland to weaken the LTTE and go for a final assault. According to sources, Karuna cadres, including children, helped security forces push North through the mined no-man's land, allowing the Army to claim about 600 square kilometres of territory from the LTTE so far. Sri Lanka, however, continues to maintain that no link exists between the Army and the Karuna faction. According to a March 17 report, Sri Lanka's National Security Minister, Keheliya Rambukwella, said, "It can be inevitable assistance. (But) it is unplanned. We don't request assistance from an illegal organisation."

Estimates regarding the military strength of the TMVP range between 300 to 700. The TMVP reportedly aims to increase their number to 2000 cadres. E. Pradeep, the political leader of the TMVP in the East, ‘Commander Pillaiyan’, and ‘Senior Commander’ Jeyam, are some of the top leaders of the group. The group is active in all three districts of the Eastern Province – Ampara, Batticaloa and Trincomalee – as well as in Polonnaruwa in the North Central Province. The TMVP has three military camps in Mutugalla, and one each in Maduarrangala and Karopolla as disclosed by an aid worker, according to the Human Rights Watch (HRW) January 2007 report. The report further claimed that the group was active in abduction and conscription of children in Mankerni, Valaichechenai, Kumpurumollai, Korakallimaddu, Maavidivembu, Vantharumoolai, Chenkalady and Eravur areas. The political wing of the group has its offices established in Valaichechenai, Korakallimaddu, Morakkottanchenai, Chenkalady and Batticaloa Town. All these places where TMVP has its presence – political, military or operational – are allegedly closely connected with security forces check posts, giving credence to the claim that they have tacit support from government troops to carry out their ‘limited operations’ to nullify the LTTE’s advantage.

Apart from the tactical advantages brought in by the Karuna faction, his renunciation of the idea of a separate state is in perfect rhythm with the official vision of a conflict-free Sri Lanka. While addressing a passing out parade of his cadres at an undisclosed military base in the East on March 3-4, 2007, Karuna declared:

We believe, today, in the rule of law, democracy and pluralism. Sri Lanka is our Motherland. We want to live equally with the majority Sinhalese and minority Muslims. We consider that it is our duty to respect the country's Constitution and also the President and the government of Sri Lanka. The TMVP is thankful to the Sri Lankan government and the Sri Lankan Security Forces for liberating the Tamil people who were held as human shields at Vaharai. The Tamils should remember the few hundred soldiers who sacrificed their lives to liberate Vaharai from the ruthless Vanni Tigers…. When we left the LTTE on March 03, 2004, we decided to enter into the main stream politics of Sri Lanka. When we left the LTTE, we also gave up the policy of separate State or Tamil Eelam. We do not believe in such a utopian politics any more.

Using faction against faction, however, could prove a double edged weapon. The government is currently using the Karuna faction’s strength to advantage in the entrenched battle to regain lost territories from the LTTE, but the future is fraught with risk. Karuna, the most dreaded and ruthless of the LTTE ‘commanders’ before he split from the mainstream ‘Wanni faction’, has already adopted his former leader, Prabhakaran’s, methods in the areas of his dominance. He has reportedly banned several Tamil dailies in Batticaloa for not carrying the TMVP’s propaganda and allegedly truing to ‘create conflict’ among the Tamils and Muslims in the Eastern Province. Reports indicate that the TMVP is going the same way as the LTTE, levying taxes and harassing people.

Karuna, who encouraged some 2,000 child soldiers to return home in 2004, once again began to abduct children and forcibly recruit cadres into his forces around June 2006. According to UNICEF data, they had recorded 208 complaints of children and adults having been abducted by the Karuna Group in 2006. HRW claims the actual number could be three times higher, since victimised families are often to frightened to lodge reports. Evidence received by HRW indicates that the abductees were first held in political offices operated by the TMVP in the townships, which were guarded by Sri Lankan Security Forces personnel, and further, that such a large number of abducted persons could not have been taken past numerous military checkpoints en route, without the knowledge of the Sri Lankan forces. Both HRW and Allan Rock, a UN Special Envoy on Children in Armed Conflict, who visited the country in November 2006, have pointed a finger at the Army for enabling the abductions. Although the government has denied these allegations on numerous occasions, these charges will eventually hurt the government in its dealings with the International community in long term.

The TMVP says it sees itself as the regional government of the future. "Karuna is the leader of the political and military wing, he is the overall leader now and forever," E. Pradeep, the political leader of the TMVP in the East, declared on March 17, 2007. The government needs to be wary cautious in its dealings with an organisation that is still being led by one of the toughest separatist extremists – though he has declared a shift in his agenda. There is no guarantee that he will not switch his game plan once again, if he sees an advantage in, or a threat from, a different direction.