The Durham player's maiden Test ton not only bailed England out of danger but also steered them to a competitive 393. In reply, India were 136-1. 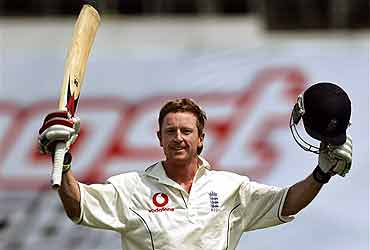 Paul Collingwood cracked a maiden unbeaten century to lead a brilliant English fightback as India allowed the game to drift out of their control in the first Test today.

The 29-year-old Collingwood played the key role in England's recovery act with a gritty unbeaten 134 and got ample support from the tailenders who frustrated the hosts by adding as many as 147 runs to the overnight tally before the first innings folded up for a competitive 393.

India began the run chase in right earnest, reaching 136 for one at stumps on the second day with opener Wasim Jaffer making a memorable return to Test cricket by remaining undefeated on 73 on a placid track at the VCA Stadium.

Captain Rahul Dravid (40) was the other not out batsman with India still trailing England by 257 runs in a match which was evenly poised at close on the second day.

The day clearly belonged to Collingwood who showed remarkable poise and temperament to not only bail the visitors out of danger but steer them to a relatively safe total.

The Indian bowlers, who were hoping to polish off the remaining three wickets quickly, were made to wait for a painfully long time before the innings ended about 40 minutes after lunch.

The dogged resistance by the English tailenders may have surprised the hosts who would now have to open up a sizeable first innings lead to harbour any hopes of victory.

Debutant paceman S Sreesanth was the pick of the Indian bowlers with four for 95 while Irfan Pathan (3-92) was the other successful bowler.

Jaffer, who last played for India in 2002 at Trent Bridge against the same opponents, showed remarkable concentration in the company of Dravid to pull India around from a shaky 11 for one. The Mumbai opener had faced 170 balls and hit 13 fours while Dravid's unbeaten knock included six fours and came off 114 balls.

The second wicket partnership has already raised 125 runs in 273 balls by stumps with Jaffer playing some pleasing clips off his toes and pads as well as drives to the off.

In the morning, Collingwood, who had come in at the fall of the third wicket yesterday, guided the tail-enders in superb fashion during his nearly six-hour vigil at the wicket.

The Durham player's composed innings, which came off 252 balls and contained 13 fours and four sixes, helped the visitors rally from a shaky overnight total of 246 for seven.

The England innings ended 40 minutes into the second session and then it was pace bowler Matthew Hoggard who struck an early blow by sending back Virender Sehwag for 2.

Sehwag, who had not played competitive cricket since February 11 when he hurt his left shoulder during the second ODI against Pakistan at Rawalpindi, spooned a drive to cover fielder Kevin Pietersen.

Dravid and Jaffer joined hands to steady the Indian reply with some cautious batting.

Earlier, England batted out the entire morning session and were dismissed when Madhusuden (Monty) Panesar was trapped leg before by another player turning out for his first Test, Sreesanth, after the number ten batsman had added 66 runs with Collingwood.

Collingwood, basically a one-day player, finally ran out of partners to remain unbeaten.

The Durham player, who used his feet beautifully to the spinners to compile his first three-figure innings, reached the maiden hundred in great style. He hit Harbhajan Singh for a soaring six over long off to shoot his way from 93 to 99 and then hit the bowler for three runs to long on to complete his century.

The last-wicket stand between Collingwood and Panesar was only four runs short of the record stand against India between Bob Willis and Paul Allott at Lord's in 1982.

Their stand also exposed the inadequacies of the Indian bowling attack led by Pathan who finished with three wickets.

Collingwood lost his overnight partner Hoggard in the second over after the second new ball was taken, but then added 60 runs for the ninth wicket with Steve Harmison (39 in 42 balls) in 58 balls.

Harmison also impressed and paid to the home team's aspirations of dismissing England for less than 300. He hit Sreesanth for three fours off successive balls -- a cover-drive, a streaky shot to third man and a hook -- to raise the 300 of the innings in the 104th over.