The former Pakistan prime minister, accused of corruption charges, is pessimistic about Musharraf-Vajpayee summit in an interview to The Dawn of Pakistan 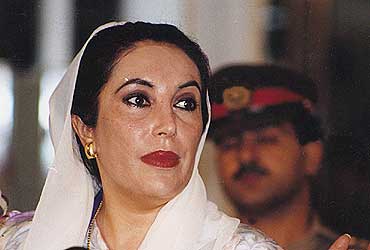 On Musharraf and Vajpayee Summit:
"The PPP advocates dialogue between India and Pakistan for a resolution of outstanding disputes between the two countries, including Kashmir. However, it is double-minded about the world's largest democracy talking to a dictator.

"The end of the ceasefire by India is indicative of the level of violence in the valley continuing unabated despite the ceasefire. In calling off the ceasefire, Prime Minister Vajpayee could be placating his hardliners who resisted talks with the architect of Kargil due to whom many Indians lost their lives.

"As far as I can see, the visit will enable Musharaf to have coffee with Vajpayee, send smoke signals of peaceful intent to the west, visit his old home and do some shopping. I am willing to be proved wrong but I doubt that the visit will lead to any substantive agreement regarding Kashmir."

Since Musharraf lacks the mandate to represent the people of Pakistan, his position is weak in negotiating lowering of tensions between the two countries, she said.

Kashmir:
Bhutto said in order to resolve the Kashmir issue, PPP has advocated a formula to have an open and safe borders between India and Pakistan without prejudice to the UN resolutions with a view to building a South Asian trading block.

On Hurriyat:
Asked whether Pakistan should involve Hurriyat conference to the summit meeting, she said "I am unable to comment on this as I am not privy to discussion on this issue. I understand that the military regime has announced it will not meet Hurriyat leaders during Musharraf's visit to New Delhi".

"The APHC is a party to the dispute and if Musharaf regime can have negotiations with New Delhi without the APHC, its leaders may feel that they too can negotiate with India without Islamabad."

Pakistan:
Commenting on a question about the political future of Musharraf, she said it is now clear that he needs to get elected to carry on in power in the future."But to get elected you need political support", she said.

The PPP opposes formalisation of the military's role in the political affairs of the country. That formalisation under the eighth amendment led to the destabilisation of democracy since 1985 and misery of the people, she said.

Asked why she can not return to Pakistan from her self exile like the former chief of Pakistan navy, admiral Masoorul Haq, who was recently brought back from US to face charges of corruption levelled against him, she said the admiral has admitted his guilt and returned on a plea bargain. Whereas she and her husband Asif Zardari were innocent and persecuted for political reasons.