After getting a foot in the door through Kumble (4-70), Munaf Patel (4-25) ensured there was no let-up, England being skittled out for 181. The target of 144 was achieved with the loss of Jaffer as Sehwag returned to form with a 76 in the company of 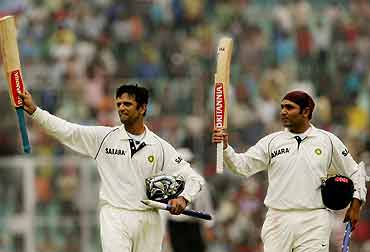 Patel and Kumble provided a lethal combination as the duo snapped up four wickets each to dismiss the visitors for a paltry 181 in their second innings to set the stage for a remarkable Indian victory.

Needing to score 144 runs for victory, Virender Sehwag marked his return to form with a blistering unbeaten 76 as the hosts surpassed the target without much fuss on a thrilling final day to take a 1-0 lead in the three-match Test series.

Sehwag hit the winning shot by taking a single off Monty Panesar to send a vociferous home crowd into a frency at the PCA stadium.

Resuming at 112 for five, Patel (4-25) and Kumble (4-70) wrecked the English innings this morning despite stand-in captain Andrew Flintoff's defiant 51 which helped his team to delay the inevitable.

Sehwag then took centrestage with his characteristic flamboyance as he rattled up the required runs in quick time while captain Rahul Dravid (42 not out) gave him company till the end.

Dravid played a typically solid knock as India, who took a 38-run first innings lead by making 338 in their first innings, ensured they go into the third Test in Mumbai with a huge psychological advantage. It was India's 13th Test win in 48 Tests against England at home and Dravid's fourth win as captain in 13 Tests.

The contribution of the bowlers to the victory was immense. Kumble, who picked his 500th wicket on the third day, finished with a match haul of nine wickets while debutant paceman Patel also impressed, bagging four crucial second innings wickets to add to his three scalps in the first.

Kumble was also named man of the match.

India started the run chase confidently before Wasim Jaffer was leg before to Matthew Hoggard for 17 (3x4, 32b) with the team total reading 39.

But the modest target meant Sehwag and Dravid carried on effortlessly.

Sehwag picked Paul Collingwood for special treatment, hitting him for a four followed by a six over mid-on the very next ball to take India within 18 runs of victory.

The opening batsman brought the winnings runs by stepping out and pushing Panesar for a single to long off. 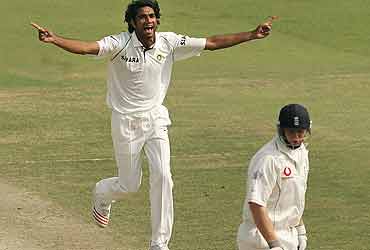 Earlier, the 22-year-old Patel used reverse swing to devastating effect while Kumble and Piyush Chawla also chipped in with a wicket each as India bowled out England for 181.

The only defiance for the visitors, who could add merely 69 runs to their overnight total of 112 for five, came from skipper Flintoff who top scored with 51 and put on 42 runs for the ninth wicket with Stephen Harmison.

Nervous England lost a wicket in the very first over the day when Geraint Jones played back defensively off Patel to see the ball spin back onto the stumps.

The wicketkeeper-batsman could add just four runs to his overnight score of one.

Before England could recover from the twin blows by the 'Bharuch Express', Patel came back to dismiss Hoggard with a toe-crushing yorker.

The three-wicket burst saw the debutant return an enviable first spell of 8-2-15-3.

Flintoff and Harmison then took it upon themselves to defy the Indian attack and hit a couple of boundaries to consolidate their measly lead.

The indomitable England skipper duly completed his 20th Test 50 with four fours and off 99 balls.

Harmison (13) was stumped by Mahendra Singh Dhoni off Kumble.

After having shown tremendous patience, Flintoff skied a sweep to backward square fielder Patel who made no mistake in taking a fine catch.