This was the third non-sarkari report on the November 1984 carnage, not by human rights activists but impeccable "establishment" figures headed by former chief justice of India S.M. Sikri, that added to the pressure on the then recently installed Raj 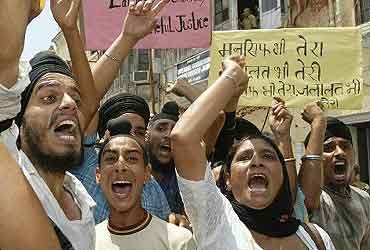 The dastardly assassination of Shrimati Indira Gandhi was unfortunately followed by unprecedented violence and lawlessness in Delhi and elsewhere. The targets of the violence were essentially the Sikhs. The nature, scale and intensity of the outrages, though directed against identifiable citizens who were made scapegoats, were an ominous warning to all peaceful and law abiding citizens. The virulence of the violence and the pattern it took caused widespread concern and alarm to all who cherish the unity and integrity of India. Some of them, among the most experienced in public service and unconnected with factional politics, invited us to serve as a 'Citizens' Commission' to enquire into these events. We readily accepted the task in the spirit of the statement issued by them on 16 November 1984, out of a sense of public duty and to demonstrate actively our sense of solidarity with and concern for the security and welfare of the affected community.

Our task has been handicapped by the lack of access to official sources. Our requests for interviews with the Prime Minister and the Home Minister remain unfulfilled. We had thus to rely principally on sources enumerated in the introduction to this Report.

We should like to acknowledge and record our appreciation for the cooperation and assistance of several voluntary organisations and numerous citizens, both those afflicted and others, who have given their time to place before the Commission accounts of their experiences, incidents they witnessed and their observations.

Our special thanks are due to all those who devoted time, energy and skill in assisting us in organising our work schedule, in making office arrangements and in preparing our programme of visits and interviews.

We thank our staff members, Shri T. D. Chawla and Shri. P. N. Gulati, for the efficient manner in which they performed their duties.

We earnestly hope that as a result of our efforts, the authorities concerned will be moved to undertake speedy corrective action along the lines recommended by us. We equally hope that our report will help the general public to perceive the stark facts of the situation in their correct perspective – which is that of safeguarding national unity and integrity.

Was It A Communal Riot?