The Nobel Prize in Literature 2005 goes to Harold Pinter "who in his plays uncovers the precipice under everyday prattle and forces entry into oppression's closed rooms". 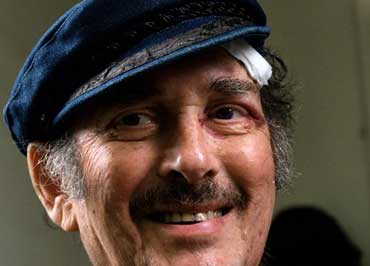 I believe that these assertions still make sense and do still apply to the exploration of reality through art. So as a writer I stand by them but as a citizen I cannot. As a citizen I must ask: What is true? What is false?

Harold Pinter was born on 10 October 1930 in the London borough of Hackney, son of a Jewish dressmaker. Growing up, Pinter was met with the expressions of anti-Semitism, and has indicated its importance for his becoming a dramatist. At the outbreak of the Second World War, he was evacuated from London at the age of nine, returning when twelve. He has said that the experience of wartime bombing has never lost its hold on him. Back in London, he attended Hackney Grammar School where he played Macbeth and Romeo among other characters in productions directed by Joseph Brearley. This prompted him to choose a career in acting. In 1948 he was accepted at the Royal Academy of Dramatic Art. In 1950, he published his first poems. In 1951 he was accepted at the Central School of Speech and Drama. That same year, he won a place in Anew McMaster's famous Irish repertory company, renowned for its performances of Shakespeare. Pinter toured again between 1954 and 1957, using the stage name of David Baron. Between 1956 and 1980 he was married to actor Vivien Merchant. In 1980 he married the author and historian Lady Antonia Fraser.

Pinter made his playwriting debut in 1957 with The Room, presented in Bristol. Other early plays were The Birthday Party (1957), at first a fiasco of legendary dimensions but later one of his most performed plays, and The Dumb Waiter (1957). His conclusive breakthrough came with The Caretaker (1959), followed by The Homecoming (1964) and other plays.

Harold Pinter is generally seen as the foremost representative of British drama in the second half of the 20th century. That he occupies a position as a modern classic is illustrated by his name entering the language as an adjective used to describe a particular atmosphere and environment in drama: "Pinteresque".

Pinter restored theatre to its basic elements: an enclosed space and unpredictable dialogue, where people are at the mercy of each other and pretence crumbles. With a minimum of plot, drama emerges from the power struggle and hide-and-seek of interlocution. Pinter's drama was first perceived as a variation of absurd theatre, but has later more aptly been characterised as "comedy of menace", a genre where the writer allows us to eavesdrop on the play of domination and submission hidden in the most mundane of conversations. In a typical Pinter play, we meet people defending themselves against intrusion or their own impulses by entrenching themselves in a reduced and controlled existence. Another principal theme is the volatility and elusiveness of the past.

Pinter has also written radio plays and screenplays for film and television. Among his best-known screenplays are those for The Servant (1963), The Accident (1967), The Go-Between (1971) and The French Lieutenant's Woman (1981, based on the John Fowles novel). Pinter has also made a pioneering contribution as a director.

It is said of Harold Pinter that following an initial period of psychological realism he proceeded to a second, more lyrical phase with plays such as Landscape (1967) and Silence (1968) and finally to a third, political phase with One for the Road (1984), Mountain Language (1988), The New World Order (1991) and other plays. But this division into periods seems oversimplified and ignores some of his strongest writing, such as No Man's Land (1974) and Ashes to Ashes (1996). In fact, the continuity in his work is remarkable, and his political themes can be seen as a development of the early Pinter's analysing of threat and injustice.

Since 1973, Pinter has won recognition as a fighter for human rights, alongside his writing. He has often taken stands seen as controversial. Pinter's interest in politics is a very public one. Over the years he has spoken out forcefully about the abuse of state power around the world