Why turn something that is messy and primal and full of tears and blood and cusses and unbearable pain and heartbreaking joy and shorthand it into lace and storks and cute fantasy animals?? 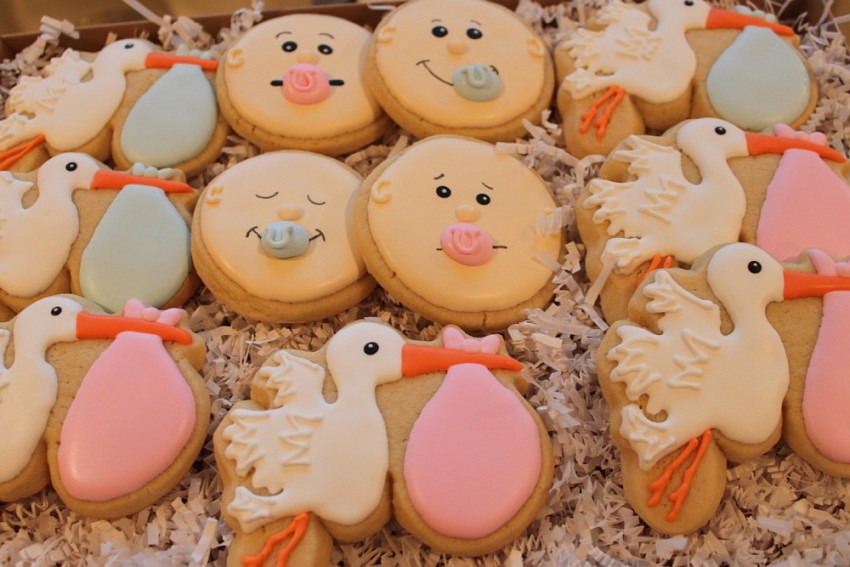 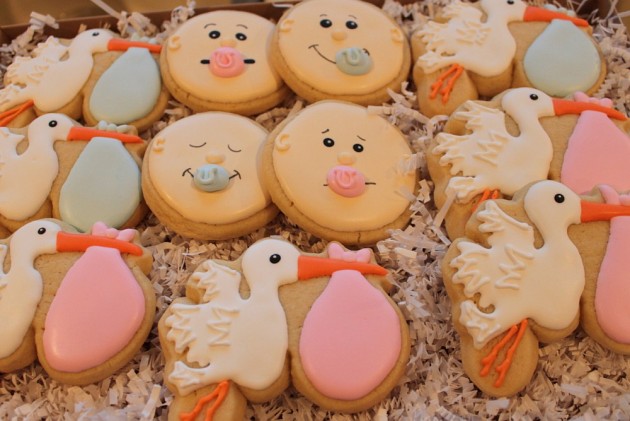 The other day someone we know had a baby and sent over this incredible hamper full of adorable little things. There was all nature of yummies ?— ?twee cupcakes with swirly frosting announcing gaily ?'?it's a girl!?', a cookie tin in candy cane pink covered with actual lace (and the cookies were pretty divine too)?;? and a card (in which fairies and storks and pink and lace and curlicued letters featured prominently) from the parents announcing (yet again) that it was in fact, a girl! (May I just say for any of my friends and acquaintances reading this who are about to have babies and send me intimation of it — that?'?s the way to do it, you cheap penny pinching buggers?, not with a mass text. I now refuse to accept any birth announcement that doesn't come with an adult's body weight in sugar, butter and processed flour that can fulfil the weekly calorific requirement of a small African village.)

"Did you send a birth announcement like this when I was born?" my daughter asked, her mouth full of pink cupcake frosting. I had to stop and think ?— ?would her father racing off to play golf an hour after her birth and arriving 18 holes and 8 beers having-told-the-entire-golf-course-later, count? "Not exactly like this, but close," I said cagily.

How could I explain to my sprog that actually there are many things about the process of childbirth that I would have liked to share with everyone in the whole wide world, but somehow curlicued letters, candy canes and pink lace would not have provided the correct syntax for my observations? That during the birth many thoughts and ideas were swirling around in my head, but cookies and cupcakes would not have been the logical outcome of any of them.

Between wondering if there was a way I could physically hack off the part of my body that was contorted in pain and run away to Brazil and still be able to do the salsa with many hot Brazilian men and thinking grimly what a beastly joke it was that something that started with you writhing in one way ended up nine months later with you writhing in quite another way, I somehow lost the will to inform everyone I knew (in pink letters and confectionery) that a baby that looked alarmingly like Winston Churchill had managed to wriggle her way out of me.

This is something I have noticed in every area to do with babies — there is a persistent and deliberate obfuscation of the reality with imagery that has nothing to do with babies or the process by which they come into this world. So there is an abundance of animals in cute representations (so as to make them completely unrecognisable), balloons and butterflies, rainbows, flowers, lace and other frou frou things rendered in pastel shades — things that have as much to do with labour or babies as they do with bridge construction or the conflict in Rwanda.

Show me a mother who has thought pastel shade thoughts at childbirth and I will show you a lucky sod who got high on her epidurial. And of course, every new mother battling painful cuts and stitches in unmentionable parts, sleepless nights, poo filled nappies and dribbling bodily fluids from every orifice has thought to herself ?— ?my life looks exactly like a cross between a beautiful rainbow and a kind idiot savant bear and a sweet piglet who are unlikely BFFs, so let me spend the next few years surrounding myself with only this imagery.

Why then is this fraud perpetrated on everyone? Why do we sanitise and bowdlerise childbirth and babyhood? ??Why turn something that is messy and primal and full of tears and blood and cusses and unbearable pain and heartbreaking joy and shorthand it into lace and storks and cute fantasy animals?

Personally, I think the butler did it. When you consider the closest that most men will come to the pain and trauma involved in childbirth is probably going 18 rounds with a heavyweight champion, stopping between rounds to have the most delicate part of their anatomy kicked by a flyweight wearing football shoes ?— ?the comparison becomes interesting. Somehow I don't see men rushing out to make the announcement of this experience ?— ?exhilarating and earth shattering as it may have been ?— ?through all nature of frilly frothy pretty things. Blood and sweat and tears wouldn't be represented by an elephant with darling ears with a knot in its tail, it would be represented by er... blood sweat and tears.

To mark having made it through the ordeal alive, men would display all their scars as red badges of courage, not hide them away behind balloons and rainbows. And to celebrate, they would drag their broken body to the nearest pub even if they had to lie down on the nearest barstool and talk about it in loud self congratulatory tones and amplify the hairiness of the whole ordeal and then would drink enough till the specific gravity of the alcohol consumed propped them upright again and they could stagger back home. And you know what, they would have jolly well earned the right to, and no one would mind and everyone would buy them a few rounds as well.

By contrast, women opt for a rueful lobotomised silence, for lace and cutesiness and send baked goods to others and drink ajwain water to reduce bloating. Who should one blame for this if not Jeeves?