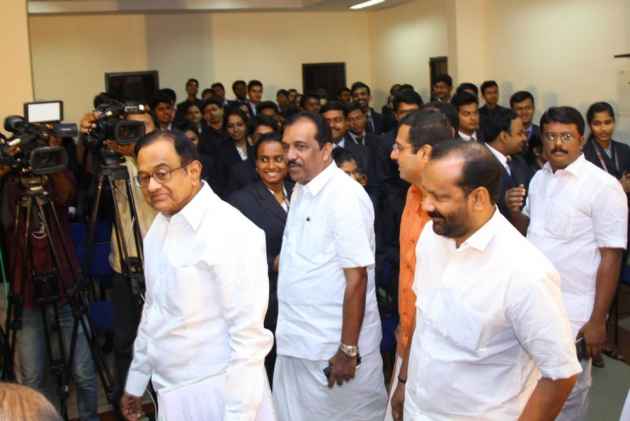 Former Union finance minister and senior Congress leader P Chidambaram today hit out at the Centre saying it is sucking people's blood by constantly raising the excise duty on petrol and diesel.

A day after Finance Minister Arun Jaitley claimed in the Rajya Sabha that the economy was in the hands of a "terrible doctor" during the 10-year UPA rule, Chidambaram hit back at the BJP-led government, saying it had been a "terrible patient, unwilling or incapable of listening to a good doctor".

Claiming that key sectors, including health, education, agriculture and jobs, had not shown any growth under the BJP rule, Chidambaram alleged that the major challenges remained unaddressed, while there were only grand announcements and grand schemes.

"The government is simply sucking your blood by constantly raising the excise duty on petrol and diesel," he said, addressing a seminar on the "State of Indian Economy" in view of the Union Budget, organised by the Rajiv Gandhi Institute of Development Studies here.

Alleging that the country's economy was limping under the NDA rule, he said the government would contribute a new word to the Oxford English dictionary -- "jumla" (gimmick).

Referring to the Congress leader's quip that the chief economic adviser -- the author of the "Economic Survey" -- was a very good doctor but the government was a terrible patient, Jaitley had yesterday said in the Rajya Sabha that even a bad patient ended up getting cured if the doctor was good.

Noting that in many ways, the BJP-led NDA government was luckier than the previous Congress-led UPA regime, Chidambaram said during the UPA rule, the price of crude oil had touched USD 147 a barrel and that within three months of the NDA coming to power, it had first fallen to USD 40 a barrel and then, below USD 40 a barrel.

"I can't remember a day when the prices of crude oil went below USD 100 a barrel (during the UPA rule). They (NDA) got a huge bonanza when the crude oil prices fell to USD 40 a barrel and remained so for almost two-and-a-half years," he said, delivering his first speech on the budget outside Parliament.

Chidambaram also said the budget presented by Jaitley was silent on a possible rise in the crude oil price and its likely impact on inflation.

"Every budget assumes a crude oil price. Crude oil is the single commodity that will affect our inflation. Therefore, every budget had presumed that the crude oil prices would be between USD 60 and USD 65 (a barrel) and then made the numbers. The numbers may go wrong," he said.

Chidambaram also said there was no answer from Jaitley on the questions he had raised on crude oil prices.

Asked about the solution to turn around the economy, Chidambaram said, "Simple...A new government."