Can Modi Craft A New Equation With China?

Modi's main challenge is not in Beijing, it's changing those entrenched mindsets here at home… 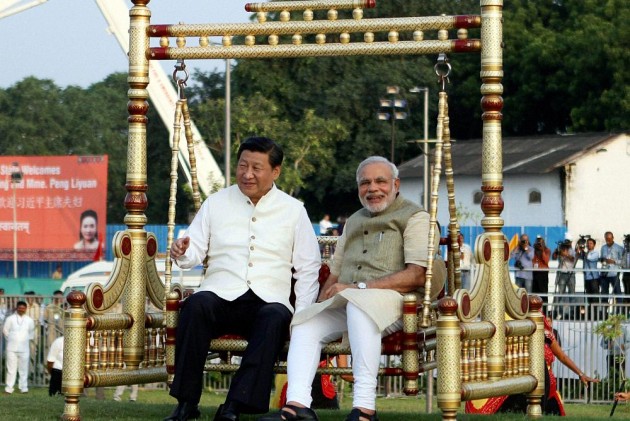 The Modi-Xi rendezvous last September evoked several images but the one that stands out is the public courting of a Chinese leader by Modi. By spending several hours showing Xi Jinping around under the live gaze of the Indian media, Modi was perhaps hoping to endear the Chinese leader to the Indian people. Modi recognises that the China equation cannot be transformed by stealth, and, without public support it would be difficult for him to re-craft a new relationship. In this case it is even more important because the China factor remains historically trapped in contested images.

It could be argued that Modi is diffusing his worldview on a far more conservative elite that is still mostly comfortable with the West. Let's be clear, while Modi is not anti-West, he is not enamored by the Atlantic world either. For Modi, Eurasia and East Asia is where he has been most exposed, and, this is the part of the world that is poised to become an even more important centre of gravity in the coming decades. The question is whether this worldview is shared by civil society, the strategic community, media and by extension — the Indian people.

Can Modi change Indian attitudes on China? Yes, but this will be an uphill task because the notion of "western-ness" is deeply ingrained in the Indian strategic mind, and, in the past decade multiple epistemic communities have flourished to endear the Indian elite to a western conception of world order despite the objective conditions no longer meriting such a predisposition.

Ironically, it was Jawaharlal Nehru, a leader deeply westernised by habit and experience, who socialised the Indian people to a post-independence identity. Similar to Modi's predicament today, Nehru sought to diffuse ideas to an otherwise conservative and relatively insular elite on what ought to be India's worldview and international role. Nehru and many of his peers instinctively viewed Asia's resurrection from colonialism and imperialism as a wider phenomenon that Indians could identify and empathise with. The Nehruvian image of China — as a fellow Asian state recovering from its century of humiliation as a semi-colonial prize for external predators — seemed similar to India's even more degrading experience as a full colony.

Inheriting the executive office at another inflexion point in world politics, it has fallen upon Modi to re-craft India's role for the emerging world order. Similar to Nehru, Modi is ahead of the curve, and, does not appear constrained by any deep ideological preferences other than to secure India's place in the sun. Just as Nehru was quick to recognise the consequences of a bipolar world, Modi has understood that the next decade is likely to be very different from that faced by his predecessors.

It is, however, Modi's contrast with Nehru that defines the contemporary phase. As Gandhi once observed, Nehru's "nationalism" was "enriched by his fine internationalism". For Nehru, while bipolarity was a reality, he was more interested in stabilising the balance of power rather than extracting selfish benefits for India. While Nehru passionately diffused an independent identity for India, he was a reluctant nationalist. Nehru's definition of India's national interest in 1947 set the tone for his foreign policy. He said, "we propose to look after India's interests in the context of world cooperation and world peace." Instead of exploiting the bipolar balance, Nehru pursued a different role for India: as a peacemaker and bridge-builder between the two antagonistic blocs. The available archives reveal how actively India intervened in attempting to stabilise east-west ties in the 1950s. Ironically, it was China that ultimately brought Nehru and his ideas down.

For Modi, the national interest is defined differently. For example, although Modi has invoked the traditional concept of Vasudhaiva Kutumbakam or "one world", he has no intentions of trying to bridge the two mutually suspicious worlds that we witness today. What Modi was, arguably, signaling was that India is not interested in entering any great game between the great powers. Instead, an "India first" approach animates his worldview.

Modi is a nationalist but also of an era where complex global interdependence has made an element of internationalism a vital part of any foreign policy. Interestingly, responding to a question during his Japan visit last year, Modi remarked that he found no contradiction between nationalism and globalisation. This comment offered a glimpse into his worldview, and, suggests that Modi views the international system primarily in instrumental terms — how can globalisation and great power equations be leveraged to benefit India. His quest to de-securitise the China narrative and place it on a more objective footing stems from this prism. For instance, after a long time has an Indian leader called for "an early settlement of the boundary question" or as actively sought Chinese investment as Modi did during the Xi Jinping visit last year.

To truly leverage the multi-polar world for national and geopolitical advantage, India needs to possess a normal and stable equation with all the great powers. China is the only major power with which India has struggled to normalise its relationship, despite years of high-level summitry, multilateral coordination and inter-state commerce. The obstacle lies more in the realm of beliefs and choices. Although there is a large measure of continuity in India's foreign policy, Modi is attempting to effect change to make the necessary adjustment to a post-unipolar order. Modi is re-steering India's role to focus on the neighbourhood, which in his words, "occupies a special place in my national development plans and foreign policy." Modi's body language throughout the Xi visit last September was one of confidence and equality with his Chinese interlocutor. But he also appeared conscious of Nehru's ghost and the enduring legacy of suspicion for China in the Indian mind.

It will require statesmanship and a clear communication strategy to transcend the deep elite resistance against re-setting India's equation with China. We can only hope that Modi has the vision and resolve to change the patterns of the past. For Modi, changing China policy truly is a domestic challenge!