Obama sat in the Oval Office side by side with Binyamin Netanyahu and spoke to the journalists. He spoke softly, very softly. But leaning against the wall behind him, hidden by the flag, was a very big stick indeed. 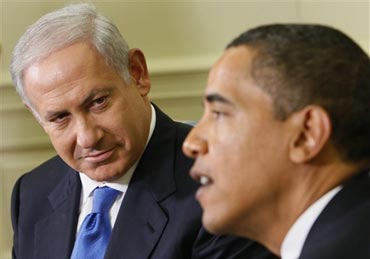 BARACK OBAMA is often compared to Franklin Delano Roosevelt, but it is from the book of another Roosevelt that he has taken a leaf: President Theodore Roosevelt, who, 108 years ago, advised his successors: "Speak softly and carry a big stick!"

This week, the whole world saw how this is done. Obama sat in the Oval Office side by side with Binyamin Netanyahu and spoke to the journalists. He was earnest, but relaxed. The body language spoke clearly: while Netanyahu leaned forward assiduously, like a traveling salesman peddling his merchandise, Obama leaned back, tranquil and self-assured.

He spoke softly, very softly. But leaning against the wall behind him, hidden by the flag, was a very big stick indeed.


THE WORLD wanted, of course, to know what went on between the two when they met alone.

Coming home, Netanyahu strenuously tried to present the meeting as a great success. But after the spotlights turned off and the red carpet rolled up, we can examine what we have really seen and heard.

Among his great achievements, Netanyahu emphasized the Iranian issue. "We have reached complete agreement," he proudly announced time and again.

Agreement on what? On the need to prevent Iran from getting a "military nuclear capability".

Just a moment. What is that we hear, "military"? Where did this word creep up from? Until now, all Israeli governments have insisted that Iran must be prevented from acquiring any nuclear capability at all. The new formula means that the Netanyahu government now accepts Iran having a "non-military"– which is never very far from a "military" - nuclear capability.

This is not Netanyahu’s only defeat on the Iranian issue. Before his trip, he demanded that Obama give Iran just three months, "until October", and that after this "all the options would be on the table". An ultimatum that included a military threat.

Nothing of this remains. Obama said that he would conduct a dialogue with Iran until the end of the year, and that he would then assess what had been achieved and consider what to do next. If he came to the conclusion that there had been no progress, he would take further steps, including the imposition of more stringent sanctions. The military option has disappeared. True, before the meeting Obama told a newspaper that "all the options are on the table", but the fact that he did not repeat this in Netanyahu’s presence speaks volumes.

No doubt Netanyahu asked for permission to attack Iran, or – at the very least – to threaten such an attack. The answer was a flat No. Obama is resolved to prevent an Israeli attack. He has warned the Israeli government unequivocally. Just to make sure that the message has been properly absorbed, he sent the CIA chief to Israel to deliver the message personally to every Israeli leader.

The Israeli plan for a military attack on Iran has been taken off the table – if it was ever lying there.

This word almost disappeared during the reign of Bush the Younger. True, all US administrations have opposed the enlargement of the settlements, but since the failed attempt by James Baker, the Secretary of State of Bush the Elder, to impose sanctions on Israel, no one has dared to do anything about them. In Washington they mumbled, on the ground they built. In Jerusalem they dissimulated, and on the ground they built.

As a senior Palestinian put it: "We are negotiating about dividing the pizza, and in the meantime Israel is eating it."

It has to be repeated again and again: the settlements are a disaster for the Palestinians, a disaster for peace and a double and triple disaster for Israel. First, because their main aim is to make the establishment of a Palestinian state impossible, and thus prevent peace forever. Second, because they suck the marrow out of the Israeli economy and swallow resources that should be used to help the poor. Third: because the settlements undermine the rule of law in Israel, they spread the cancer of fascism and push the whole political system to the right.

Therefore Obama is right when he puts the settlement issue ahead of everything else, even ahead of the peace negotiations. A total cessation of building in the settlements comes before anything else. When a body is bleeding, the flow has to be stopped before the disease can be treated. Otherwise the patient will die of loss of blood and there won’t be anybody left to treat. This is precisely the aim of Netanyahu.

This is why Netanyahu has refused to accede to the request. Otherwise his coalition would have fallen apart and he would be compelled to resign or set up an alternative coalition with Kadima. The hapless Tzipi Livni, who has not found a role in opposition, would probably jump at the opportunity.

Netanyahu will try to use Barak against Barack. With the help of Ehud Barak he is putting on a performance of "demolishing outposts", in order to divert attention from the ongoing building in the settlements. We shall see whether this ploy succeeds and whether the settlers’ leadership will play their part in this charade. The day after Netanyahu’s return, Barak demolished for the seventh time (!) Maoz Esther, an outpost consisting of seven wooden huts. Within hours, the settlers returned to the place.

(The Israeli army has built an entire Arab village in the Negev for training purposes. Somebody joked this week that the army has also built this outpost and manned it with soldiers disguised as settlers, so it can be demolished every time there is pressure from America. Afterwards the soldiers build it up again, ready for use the next time pressure is exerted.)

REFUSAL TO freeze the settlements means refusal to accept the two-state solution. Instead, Netanyahu juggled with empty slogans. He spoke about "two peoples living together in peace", but refused to speak about a Palestinian state. One of his aides called the demand for two states a "childish game".

But this is not a childish game at all. It has already been proven that negotiations, the aim of which has not been defined in advance, do not lead anywhere. The Oslo agreement collapsed for precisely this reason. Netanyahu hopes that the next round of negotiations will also founder because of this.

He has not presented a plan of his own. Not because he has no plan, but because he knows that nobody would accept it.

Netanyahu’s plan is: total Israeli control over all the country between the Mediterranean Sea and the Jordan River. Unlimited Jewish settlement everywhere. Limited self-government for a number of Palestinian enclaves with a dense Palestinian population, which will be surrounded by settlements. All of Jerusalem to remain part of Israel. Not a single Palestinian refugee to return to the territory of Israel.

This merchandise will find no buyers in the whole wide world. So Netanyahu, a professional salesman, tries to wrap it in an attractive package.

For example: the Palestinians will "govern themselves". Where exactly? Where will the borders run? He has already pronounced that the Palestinians cannot have control over "their airspace or their border crossings". A state without a military and without control over its airspace and border crossings – that looks suspiciously like the Bantustans of the late racist apartheid regime in South Africa.

I would not be surprised if at some point in the future Netanyahu starts to call these native reservations "a Palestinian state".

In the meanwhile he tries to gain time and postpone the negotiations as long as possible. He demands that the Palestinians recognize Israel as ‘the state of the Jewish people", expecting and hoping that they will reject this with both hands. And indeed, accepting it would mean giving up in advance their main card – the refugee issue – and also sticking a knife in the back of the 1.5 million Palestinians who are citizens of Israel.

Netanyahu is ready to accept Obama’s proposal to involve the Arab and other Muslim states in the peace process – an idea that has always been rigorously rejected by all Israel governments. But that is just one more of the rabbits that he will pull out of his hat from time to time in order to delay everything. Before dozens of Arab and perhaps more than fifty Muslim states decide whether to join the process, months, perhaps years, will pass. And in the meantime, Netanyahu demands from them an advance payment in the form of normalization – which means that the entire Arab and Muslim world would give up their only card without getting anything in return. Pure baksheesh.

That is Netanyahu’s working plan.


DOES OBAMA have a peace plan of his own? If one puts all his statements of the last few days together, it seems that he has.

When he speaks about "two states for two peoples", he practically accepts the peace plan that has by now become a world-wide consensus: as the "parameters" put forward by Bill Clinton in his last days in office, as the core of the Saudi peace proposal and as the peace plans of the Israeli peace movement (the draft peace agreement of Gush Shalom, the Geneva initiative, the Ayalon-Nusseibeh statement and more.)

In short: a sovereign and viable State of Palestine side by side with Israel, the pre-1967 borders with minor and agreed exchanges of territory, the dismantling of all the settlements that will not be joined to Israel in the territory exchanges, East Jerusalem as the capital of Palestine and West Jerusalem as the capital of Israel, a mutually acceptable solution to the refugee problem, a safe passage between the West Bank and the Gaza Strip, mutual security arrangements.


IN THE MEANTIME, throughout the world there is a growing consensus that the only way to get the wheels of peace moving again is for Obama to publish his peace plan and call upon both sides to accept it. If need be, in popular referendums.

He could do this in the speech he is due to deliver in two weeks time in Cairo, during his first presidential trip to the Middle East. Not by accident, he will not come to Israel during this trip, something that is almost unprecedented for a US president.

To do this, he must be ready to take on the powerful Israeli lobby. It seems that he is ready for that. The last president who dared to do this was Dwight D. Eisenhower, who compelled Israel to give back the Sinai straight after the 1956 war. "Ike" was so popular that he was not afraid of the lobby. Obama is no less popular, and perhaps he will dare, too.

As "Teddy" Roosevelt indicated: when you have a big stick, you don’t have to wave it. You can afford to speak softly.

I hope Obama will indeed speak softly – but clearly and unambiguously.